Eighty percent of all SWD cup traps have captured SWD since the beginning of the season. Best practices for minimizing fruit infestation are reviewed. Start now!

As of July 7, 2017, more than 80 percent of all the deli-cup style traps have caught adult SWD flies, with an average of seven SWD flies per trap each week for the last two weeks and a total of 720 SWD flies captured during the week of July 1–7. The graphs below show average numbers of SWD flies caught in traps each week starting the week ending in May 19.

SWD pressure is strong and early this season and growers of susceptible fruit should be prepared to manage this insect through their harvest season. When scouting for this pest, keep in mind the following:

A successful program for minimizing fruit infestation by SWD requires the use of a combination of best practices, including:

Counties included in the 2017 trapping network are Allegan, Antrim, Benzie, Berrien, Grand Traverse, Ingham, Ionia, Kent, Leelanau, Lenawee, Livingston, Macomb, Manistee, Mason, Monroe, Montcalm, Muskegon, Oceana, Ottawa and Van Buren. All traps in the network are baited with commercially available lures and placed in susceptible crop fields or orchards, or in a location adjacent to susceptible crops. The majority of the traps this season are standard deli cup-style traps baited with the commercial Scentry brand lure. Most of the traps are placed in areas where SWD infestation has been recorded in the past. 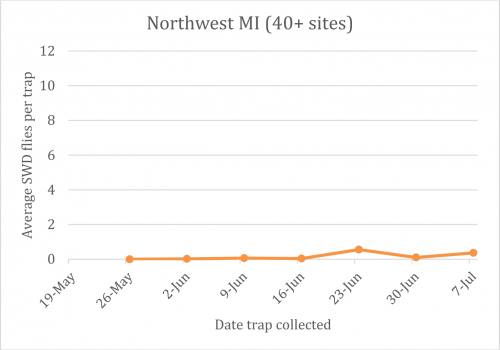 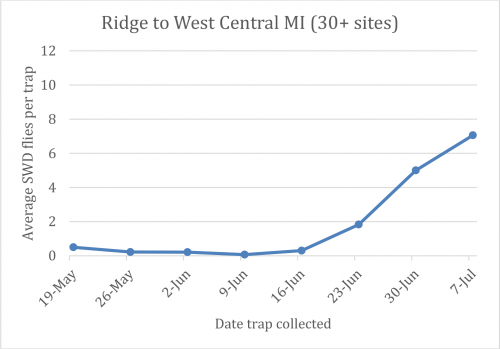 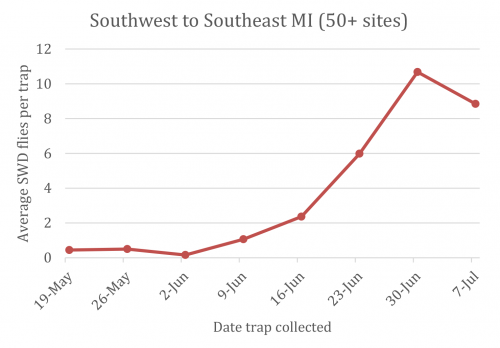