Big jump in trap catches this week – high risk of infestation expected across the state – susceptible crops must be protected.

This is the Michigan State University Extension spotted wing Drosophila (SWD) Statewide Monitoring Network report. Out of the 148 traps collected during the week prior to July 21, 1,426 females and 1,270 males for a total of 2,696 SWD flies were captured from 110 traps, or 74 percent of the traps being monitored. That is a 79 percent increase over last week. 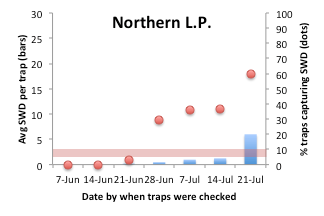 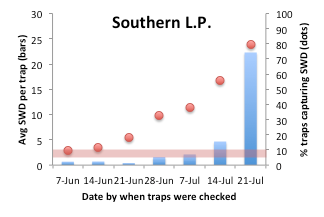 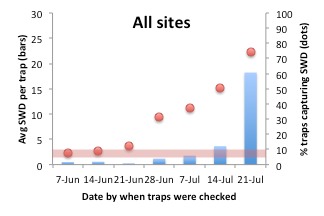 Traps in the network are baited with commercially available lures and placed in susceptible crop fields or orchards – or in a location adjacent to susceptible crops – in areas where SWD infestation has been recorded in the past. Commercial plantings include strawberry, blueberry, raspberry, grape, tart and sweet cherry, peach and plum. Counties included in the 2016 trapping network are Allegan, Antrim, Benzie, Berrien, Genesee, Grand Traverse, Ingham, Ionia, Kalamazoo, Kent, Leelanau, Lenawee, Livingston, Macomb, Manistee, Mecosta, Monroe, Muskegon, Oakland, Oceana, Ottawa and Van Buren.