Spotted wing Drosophila continues to be caught in southwest Michigan and has been detected in two northwest counties this week.

This is the third weekly report of the Michigan State University Extension spotted wing Drosophila (SWD) statewide monitoring effort for 2014. Our network of traps across more than 80 sites was checked during the week of June 30 and has revealed continued activity of this pest in Michigan, and some new detection locations. There were a total of 11 males and 20 females trapped from the following Michigan counties: Berrien, near strawberries and raspberries; Allegan, near blueberries, raspberries and tart cherries; Ottawa, near blueberries; Kent, near raspberries; Leelanau, near grapes, tart cherries and sweet cherries; and Antrim, near grapes. This is the first detection of SWD activity in northwest Michigan this season. 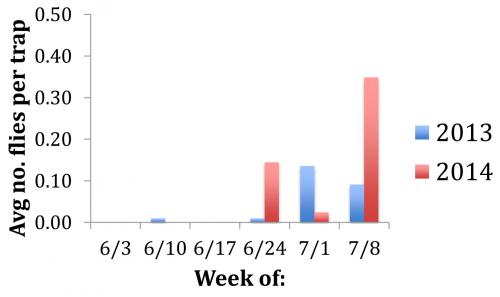 The majority of traps in the network, 85 percent, caught no SWD. Of the traps that did catch SWD, one fly per trap was typical. This indicates that SWD numbers are still generally low, but that growers should continue to be on alert for this pest as their susceptible fruit crops start or continue to ripen. This is a similar trend to last year at this time and SWD flies have been trapped at the same rate using the new commercial lure versus the yeast-baited traps.

SWD can only infest berries when they are ripening or ripe, so currently the focus of SWD monitoring and management efforts should be on ripening strawberries, early summer raspberries, sweet cherries, blueberries and tart cherries. Susceptible fruit that are just starting to be ripe should be carefully monitored and treated only if SWD are detected to minimize the risk of developing pesticide-resistant populations of SWD. In addition to the use of monitoring traps to detect the adult flies, a simple salt solution of 1 cup of salt per gallon of water can be used to assess fruit for larval infestation.