This is the first week of the Michigan State University Extension spotted wing Drosophila (SWD) report for 2013. We have a new look that we hope will be useful for growers, crop consultants, scouts and others who may be planning their SWD management programs for 2013.

Traps have been deployed at fruit farms across the fruit growing regions of the state, and this report will be a compilation of the information from those captures during the previous week. The report will go out every Tuesday along with the MSU Extension regional fruit reports, and it will include information on the counties where SWD are being trapped, the proportion of traps catching SWD, the average number of SWD per trap and guidance on management approaches. As the season develops, we plan to show the timing of first SWD captures and the trends in fly activity across the state.

For this initial report of the season, we can announce that our trap network of 103 traps has detected early activity of SWD for the 2013 season. This includes a single female SWD found on June 6 in a yeast-sugar baited trap in a tree line adjacent to a blueberry planting in Allegan County. A male SWD was also trapped in Berrien County last week outside our monitoring network. These captures are a few weeks later than the 2012 first captures, and given that there are no ripe blueberry, cherry or raspberry fruit yet, growers of those crops should focus on making sure their fields are being monitored. SWD can only infest ripening or ripe fruit.

Growers with ripening, June-bearing strawberries should monitor traps and their fruit for SWD, although this pest was not reported in the early strawberries last year. 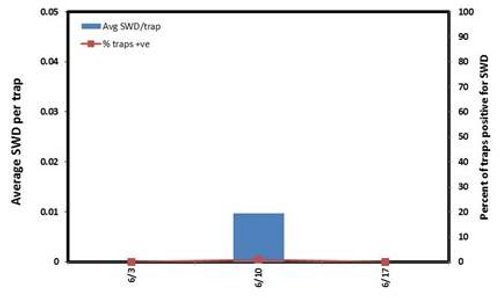 For more information on SWD and to read past reports, visit MSU's Spotted Wing Drosophila website.