Dead leaves and needles that accumulate in yards adjacent to buildings, on roofs and in eves pose a fire risk to structures when they dry out in the following spring wildfire season.

Dead leaves and needles that drop in the fall and accumulate in yards adjacent to buildings, on roofs and in eaves pose a fire risk to structures when they dry out in the following spring wildfire season. Michigan State University Extension advises Michigan residents to take proactive measures now. 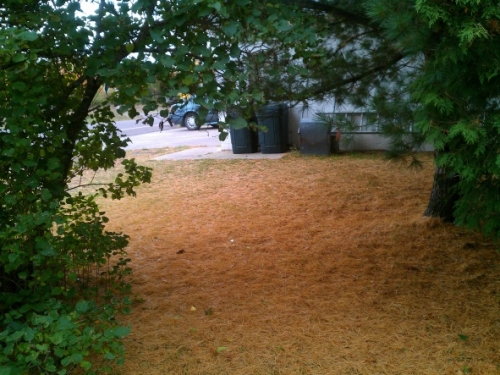 Fall accumulation of white pine needles in side yard

“Every fall, trees lose leaves and needles as part of the natural growth processes of the plants,” said MSU Extension educator Mike Schira. “Most individuals are not too alarmed by the potential fire threat that these harmless-looking accumulations of debris present while they’re. packed down by wet conditions and winter snow loads. The following spring, however, these clumps of dead leaves and needles will dry out. In the event of wildland fire occurrences, firebrands landing in combustible materials such as dead grass, leaves and needles can ignite spot fires and put homes and structures at risk.”

In a wildland fire, hot embers or burning materials of varying size called firebrands can be lofted up by the wind and deposited thousands of yards – up to a mile or more – from the actual wildfire. Should these firebrand embers land in dried accumulations of needles or leaves on roofs, in eaves, under decks or around building foundations, they may start spot fires that then ignite the structures.

Schira advises homeowners and cabin and cottage owners to take precautions to prevent wildfire loss to their properties.

“As part of creating a defensible area around their buildings, they should remove accumulations of combustible material from on and around all structures,” Schira said. “Because it’s difficult to know exactly when the spring fire season might pose a threat, it’s suggested that homeowners clear away the potentially combustible materials as soon as they can following the fall leaf drop.”

As part of itsFirewise program, Michigan State University Extension maintains a website with links and information that should be useful to home, camp and cottage owners in areas where wildfire may pose a threat to their structures. A useful bulletin available for homeowners is MSU Extension Bulletin E2831, “Protect Your Michigan Home from Wildfire.”

Keep wildfire protection in mind when remodeling or building homes

Protecting your home from wildfire is an ongoing endeavor

Knowing about fire behavior can protect your home from wildfire

Learn what is safe and legal to burn outdoors