Monitoring and management strategies for apple maggot in 2010

Apple maggots (AM) overwinter as pupae and are developmentally ready to emerge as adults in early summer (900 growing degree-days base 50). Peak emergence generally occurs between 1,400 and 1,700 growing degree-days but is highly dependent on site-specific weather conditions. In 2010, most apple producing regions achieved 900 GDD the third or fourth week of June, and rain events provided good soil moisture conditions for apple maggot emergence. Low levels of apple maggot adult emergence have been detected at the MSU Trevor Nichols Research Complex in Fennville for the last three weeks.

Monitoring adult apple maggot flight is key to effective management of this pest. Adult activity can be monitored using yellow sticky boards with ammonium bait, or a red sphere trap covered with an adhesive and baited with synthetic fruit volatile. The yellow trap is most useful during the pre-oviposition period when newly emerged females are actively feeding. The red sphere trap mimics the ripening fruit that flies are attracted to during egg-laying, and is effective throughout the season. Comparisons of the two trap types in Michigan have revealed that the red sphere baited with fruit volatiles is the most effective, consistently catching three to four times more flies. Traps should be placed on the south-facing side of trees in perimeter rows because most flies are expected to be immigrating from wild hosts outside the orchard. Optimally, traps should be checked twice weekly starting just before 900 GDD base 50ºF until the first fly is captured, then once a week thereafter to indicate the end of the flight.

Identifying apple maggots generally requires the use of a 10X hand lens. Adults are dark flies, approximately 6 mm in length. The most characteristic feature of the fly is the dark pattern on their wings (Figure 1). These wing-banding patterns are used to differentiate between fruit fly species. Apple maggot has four distinct black bands toward the wing tips, as seen in the accompanying illustration. Further identifying characteristics for the apple maggot include a white spot on the back of the thorax, and white bands across the top of the abdomen.

The greater the number of traps deployed per block, the greater the confidence level in basing treatment decisions on fly catch. Place at least two traps along borders that historically have been a source of infestation. Proper trap maintenance is crucial to trap effectiveness. Over time, the adhesive can be fouled by leaves, twigs, other insects and debris. Remove debris and insects each time traps are checked. The adhesive should then be evenly redistributed. In determining control treatment timing, on-farm fly catches should be used in conjunction with regional trapping information. Basing treatment decisions solely on regional information may lead to unnecessary insecticide applications. If you employ a good trapping program, a control treatment for apple maggots is not warranted until flies are captured on your farm. If flies are trapped on-farm, and a regional trap catch was recorded prior to the on-farm fruit fly capture, the treatment should be timed based on the earlier regional capture. This conservative approach is the best way to ensure that the control is applied prior to egg hatch. Chemical control of apple maggots is focused almost entirely on the adult, with the goal of preventing egg-laying.

Upon emergence there is an eight to 10 day period before female flies begin to lay eggs. During this time, they are searching for nutritional sources needed to become sexually mature. After female flies complete this pre-oviposition period and have mated, they will seek out fruit for egg-laying. They lay eggs just under the skin of ripening fruit with a needle-like ovipositor, making visual detection of the puncture wound difficult to distinguish from lenticels on the apple surface. Fly larvae, called maggots, hatch from eggs within a week and begin to feed in the flesh of the fruit. Maggot infestations will sometimes cause fruit to abort, but often the fruit will hang till harvest. Mature maggots drop out of fruit and enter the ground, where they pupate, starting the next generation’s life cycle.

Control of the apple maggots has been traditionally achieved with organophosphate insecticides, like Guthion and Imidan, but some label or processor restrictions may limit their use near harvest. Synthetic pyrethroid compounds, like Asana, Warrior, Danitol, Decis, Battalion, Mustang Max and Baythroid XL, are also toxic to adult fruit flies, but are generally viewed to be moderately effective because they have a shorter field residual. There are several new reduced-risk and OP-replacement insecticide products that include apple maggots on their labels. The neonicotinoids Calypso, Clutch, Belay, Provado and Assail are labeled for apple maggot control. All three have performed well against apple maggots in small plot field-performance trials. Calypso and Assail have also performed well in on-farm trials conducted in Michigan over the past few years. The Spinosyn compounds Delegate and Entrust are highly active on APPLE MAGGOTS when ingested, but have shown to be only fair control materials in field trials with high pest pressure, thus are labeled for apple maggots suppression only. The new Diamide material Altacor is similarly active on apple maggots, and is labeled for population suppression.

GF120 NF Fruit Fly Bait (spinosad) is registered on pome fruits for control of apple maggots and is listed by the Organic Materials Review Institute (OMRI) for use in organic production. Because the primary route of entry is through ingestion, applying this product during the fruit fly pre-oviposition period is important for optimal performance. GF120 must be applied with specialized equipment, and is designed for low-volume application. Field efficacy data is encouraging, but we have limited experience with this novel tool to date.

The use of SURROUND WP for fruit fly control is based on creating a protective barrier between the plant and the pest that 1) reduces host recognition of the pest, and 2) prevents adult oviposition (egg-laying). Because it is not toxic to adult flies like conventional contact poisons, complete coverage of the plant is critical. Multiple applications are typically needed to attain initial coverage; further sprays may be necessary to respond to wash-off from rain or excessive wind. Field trials indicate that when adequate coverage is maintained, excellent fruit protection can be achieved. 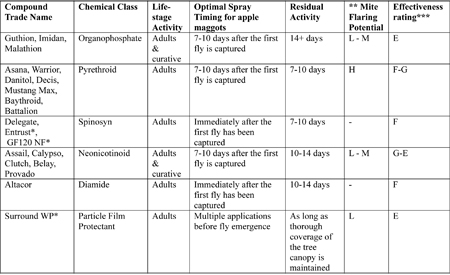 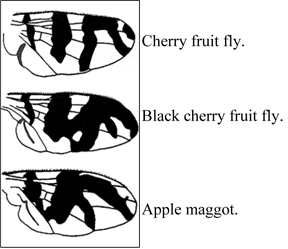 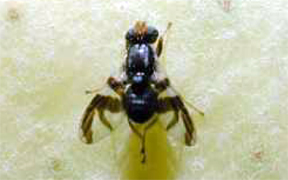 The wing-banding pattern of the adult apple maggot fly.