Not all beach muck is created equal

Landowners on Lake Michigan’s Little Point Sable are all too familiar with the effects of invasive species. When a tall reed began spreading and crowding out native beach plants, they identified it as Phragmites and took action to eradicate the aggressive invader. 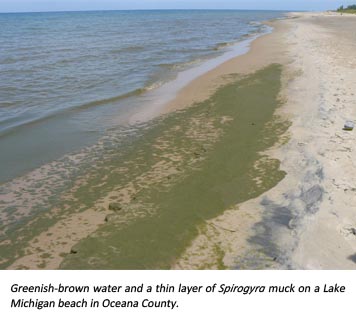 Now a “sludgy green algae” has been washing up on their shores. This time the culprit is Spirogyra, a filamentous green alga that is native to the Great Lakes region. Even though it is a native species, Spirogyra thrives in conditions created by exotic zebra and quagga mussels.

Zebra and quagga mussels filter phytoplankton out of the water. This has more than doubled water clarity in Lake Michigan and led to more sunlight on the bottom of the lake, where Spirogyra thrives. In Saginaw Bay, researchers found that Spirogyra and another filamentous green alga, Cladophora, increased dramatically after the mussel invasion. This led to major problems with “beach muck” that result when algae washes up on the shore to rot.

The stench of rotting algae is often compared to that of manure. If that isn’t bad enough, there are also human health concerns associated with beach muck. Rotting mats of Cladophora can harbor E. coli and pathogens such as Salmonella. The alga, itself, is not likely to be a source of pathogens, bu 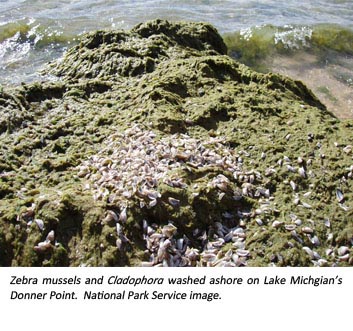 t rather it provides a hospitable environment for microbes that entered the environment due to human activity or bird feces.

In Lake Michigan, beach muck problems have been worst on the Wisconsin shoreline where the lake’s bottom is rocky and currents deposit mats of algae on the shore. On the Michigan shoreline, beaches along the central and southern shore of Lake Michigan are mostly sand. While Cladophora typically grows attached to rocks or other hard surfaces, Spirogyra is free living. It grows in fine strands that settle out to the bottom and can form bright green mats when conditions are calm.

When wind-driven currents stir up the shallows where Spirogyra grows, the algae can accumulate along the shoreline and rot. While this can be unpleasant for beachgoers on the Michigan side of Lake Michigan, Spirogyra does not generally reach the high biomass levels that Cladophora can by virtue of its attachment to rocks. This means that when beach muck does appear from time to time on sandy Lake Michigan beaches, it is a relatively minor problem.

For more information about algal challenges on the Great Lakes:

Changes in the benthic algal community and nutrient limitation in Saginaw Bay, Lake Huron, during the invasion of the zebra mussel (Dreissena polymorpha) (PDF)