It is best to weigh fish alive, but keeping dead fish cold and damp will help to prevent water loss if this is not possible. Keeping dead freshwater fish in ice water will result in weight gain if held for an extended period of time.

It seems like most anglers have a story about catching the “big one” that should have broken a record or won a tournament – if only it had been weighed immediately. These stories usually start with an epic battle early on during a long day of fishing. The fish is landed and weighed, and all are amazed at its size.  Then the story takes a turn to the tragic. After a long day in the sun, the fish is finally brought to a certified scale and it weighs much less than it did before. Some of these stories may involve the notorious story-embellishing prowess of anglers, but there is a grain of truth in any good story.

Fish can lose weight in several ways after being capture. Blood loss, regurgitation, and defecation are all possibilities, but in most cases, water loss is the most important factor. Since fish live in water, they are constantly struggling to maintain the correct balance of water in their bodies through osmoregulation.  In 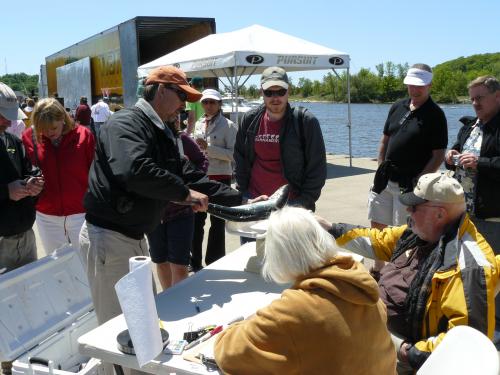 freshwater, this means that fish must constantly excrete excess water while pumping ions into their blood. When stressed and held in freshwater, fish stop excreting water and gain weight through osmosis. This natural influx of water continues even after the fish dies if it is held in freshwater.

Great Lakes salmon and trout tournament anglers weigh dead fish and usually do not have the space or equipment to keep these large fish alive for an extended period of time. Most state and world record holders also weigh dead fish due to the difficulty of keeping large fish alive. However, hardy species like catfish can sometimes be held alive for long enough to weigh and release to fight again.

If fish cannot be kept alive, they should be kept damp and cold to prevent dehydration and maintain the quality of meat. Keeping fish on ice in a cooler is a good way to accomplish this; one pound of crushed ice per pound of fish is recommended for rapid chilling and avoidance of bruising.

A study of dressed Chinook salmon held in chilled (32 Fahrenheit) freshwater for four days found weight gain in excess of 5 percent, but this study used fish that had been captured by commercial fishermen and transported on ice for up to 18 hours before initial weighing. One problem with water gain is that it can influence the quality of meat. Another issue is that most anglers do not have chilling systems and fish held in warm water spoil much more quickly than fish kept on ice.

Anglers are most concerned with weight loss initially after death, and little research has been focused on this. Keeping fish in a slurry of ice and water should help to keep weight on, and possibly increase weight. If future studies demonstrate that holding recently caught fish in ice water results in a significant increase in weight this would raise ethical questions worth consideration by tournament organizers and record-keeping organizations.