Tropical or “tender” perennials need to be lifted out of the garden before a hard freeze.

This is the time of year I wish my mother would call me up and remind me it’s time to lift tender perennials such as cannas, callas and dahlias for storage indoors. Too often gardeners get caught up in the wonderment of fall football and Halloween, forgetting this money-saving chore. Left outside all winter, these warm climate lovers will die back and you will be purchasing new ones next spring. Well, consider this message your mother – it’s time!

When in doubt, lift them out

Green giants of the garden such as the majestic Canna are in a group of plants known as “tender” perennials. In their native area where the frost does not kill them back, these plants live as perennials. In northern climates, it is best to be thinking about taking them out of containers or the garden bed as soon as temperatures dip to the freezing level.

Storage of plants like Canna is best when the foliage and stalks are removed, leaving the stubs to dry for a few days before placing in storage. Many gardeners like to wait until a hard freeze that kills off the top of the plant first, but they can be lifted earlier than that as well. While the requirements for lifting and storage of tender perennials are unique for each plant, there are three things to remember when storing over winter: they cannot be too wet, too dry or freeze. Never store these plants in a refrigerator where there is fresh fruit like apples, which produce a gas known as ethylene that will harm the rhizomes.

Cannas are one of the easiest plants to store over winter, but other plants such as Dahlia and Elephant Ear can be treated this same way. When plants are in storage, they are essentially dormant. Dormancy is a relative term because in their native range, cannas do not truly go dormant. It might be better to think of this resting period as a “hibernation” period. Once lifted and dried out for a day or two, the rhizomes can be stored in a variety of ways, but should be held over winter in a cool area where there is little or no light. Two things can happen to canna rhizomes during the winter: drying and rot. This means there is a balance between keeping the rhizome moist enough to avoid shriveling and dry enough not to rot. (Success rates will vary between cultivars.)

While it is often recommended that Cannas be stored in damp peat moss, one of the most practical ways to keep cannas is simply shake off the garden soil they were growing in, and “re- pot” them in a container with fresh media. (Do not store in your garden soil.) Cut off all the stalks to 1 inch above ground and simply set the pot in a cool, dark area such as a heated garage (40-50 degrees). This way, the containers will not dry out so much that the rhizomes shrivel. When stored in peat moss, one would be prudent to check rhizomes once a month to see if they are too dry. 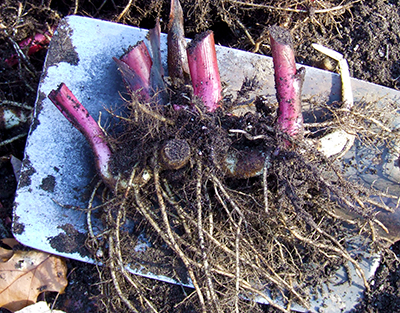 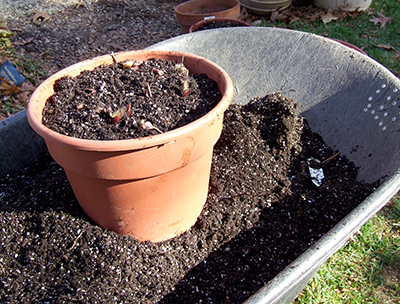 Shake off soil (left), repot into moist container media. Store in pot (right) in a cool, dark area until spring.

In the north, it is seldom wise to plant tender perennials outside when the soil is cold and soggy. If they are potted, they can be placed indoors in March on a sunny windowsill to get a jump start on spring. You can also begin growing your cannas in a cold frame or outdoors under a clear tarp. With soils warming up after Memorial Day, it is much safer to place them into the garden at that time.