Momma knows best when it comes to panda survival

How to produce rough-and-ready pandas that can survive in the wild.

A panda’s extreme level of cuteness is no defense in the harsh real world.

The battle to save giant pandas has shifted from breeding -- they have that down pat in Wolong -- to a two-prong approach based partly in China, partly at Michigan State University.

The objective: Produce rough-and-ready pandas that can survive in the wild.

Tao Tao is a two-year old male panda currently roaming in Lipingzi Nature Reserve of southwestern China. His quest, carefully monitored by a GPS collar, represents years of research and training to not only on how to rear a panda, but also to extensively study him to understand his habitat and tip the odds in his favor when reintroduced to him in the wild.

Tao Tao is Plan B. The first panda released, Xiang Xiang, didn’t make it after he was placed in Wolong in April of 2006. Xiang Xiang didn’t know how to behave like a wild panda. After less than a year of bumbling in the mountains, other pandas killed him in contentious turf wars with other neighboring males.

Hemin Zhang, director of the China Conservation and Research Center for the Giant Panda in Wolong, has studied pandas for 30 years and works to keep them from becoming only a zoo exhibit.

His friend and colleague Jianguo “Jack” Liu, Rachel Carson Chair in Sustainability at Michigan State University, has spent 17 years understanding the subtle and not-so-subtle interactions between fragile panda habitat and the humans who live in and near the nature reserve.

On the panda side, Zhang said Xiang Xiang’s fate caused him to rethink panda upbringing.

His team now embraces the idea that mother pandas teach their cubs crucial survival skills such as how to forage for food and avoid predators. These skills can best be taught to baby pandas. Once they get older, they are less likely to adapt to new ways of living.

“Our people cannot teach a panda to live in the wild,” he said. “Now we leave the teaching to the mamma.” 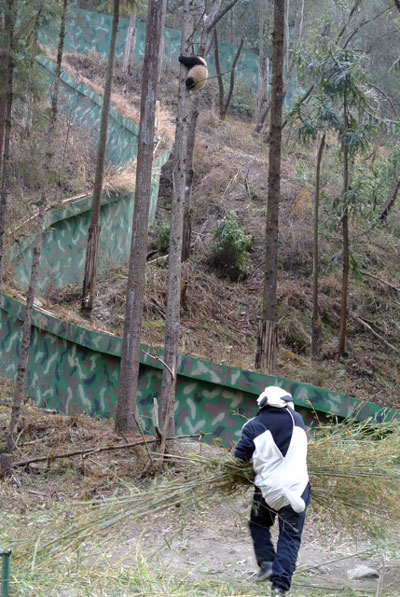 It means Wolong has become a survivalist boot camp -- with mother as drill sergeant.

Now in Wolong baby pandas are off limits to all but the people who monitor and care for the animals. The pandas are raised in expansive enclosures, filled with trees, bamboo and steep slopes that mimic prime panda real estate. The keepers who maintain the sites and feed the animals wear panda suits. Funny looking? Yes. Effective?

“Now the babies run from people,” Zhang said. Caution learned early will help them survive in the wild without turning to humans for help.

In Wolong, recordings of vocalizations and scat from predators such clouded leopards, spread in the enclosures give an aura of threat. Left to mother’s teaching, the babies head for the hills -- or up trees. They also are introduced to non-threatening species such as pheasants, sheep and pigs, which they regard as good neighbors.

On the habitat end, Liu’s research has helped improve the reserve’s habitat quality by reaching way outside an ecologist’s toolbox. He incorporated information about the villagers and demographic changes in the labor force, along with data about forest canopy density and panda population for a more complete picture of what was happening in panda land.

Zhang credits the work of Liu and his students at the Center for Systems Integration and Sustainability to lay the path to policy that subsidizes reserve residents’ electricity so they don’t chop down trees for firewood in panda habitat. More recently, Liu’s group identified that residents keeping horses in the reserve was destroying panda habitat. Horses, it turns out, can eat a lot of bamboo.

“They were competitors to pandas,” Liu said.

So far, Tao Tao is hanging in there. The test will come in the spring, when a young panda’s fancy turns to love – and competition among males that can be deadly. Zhang watches the data pour in, and puts his hopes on motherly advice.