Equip yourself to face the challenge of pesticide resistance by attending the 2013 Integrated Pest Management Academy, Feb 19-20.

The “National Pesticide Applicator Certification Core Manual” by Carolyn Randall, et. al., defines pesticide resistance as “the ability of an insect, fungus, weed, rodent or other pest to tolerate a pesticide that once controlled it.” This definition seems to suggest that individuals of a pest species are somehow growing stronger and more resistant to our control efforts. However, it is important to realize that pesticide resistance is a genetic phenomenon.

The earliest documented cases of pesticide resistance occurred in the early 1900s as chemical controls became the dominant method of pest management. Many new pesticides have been developed since that time. However, resistance typically emerges within a few years of intensive use. This cyclical pattern of research and development followed by population selection in the field and resistance is particularly challenging for pest managers. Today over 500 species of arthropods (insects, spiders and mites), 210 weed species and 150 plant pathogens exhibit resistance to at least one type of pesticide. Some pest populations are resistant to multiple pesticides. 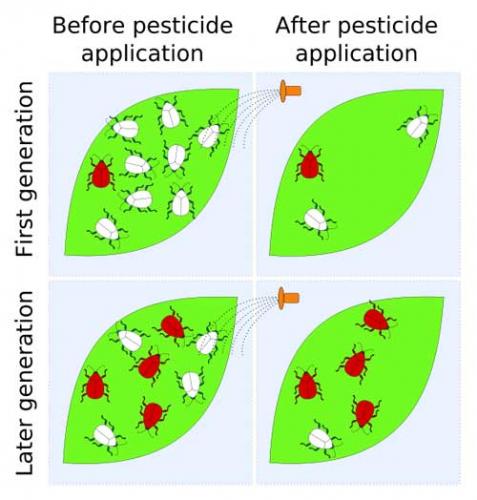 Pesticide application can artificially select for the survival and disproportionate reproduction of pests with genotypes that make them resistant to a specific mode of action. In this diagram, the original population contains just one individual that is resistance to the pesticide (red). After pesticide application, the pesticide sensitive individuals (white) die, but the resistant insect survives to procreate, resulting in a larger proportion of the subsequent generation being the resistant genotype. After repeated applications, resistant individuals may comprise the majority of the population. Photo Credit: Delldot

Integrated pest management (IPM) is an approach to pest management that can limit the development of pesticide resistance as well as aid producers in managing pest populations that already exhibit resistance. IPM systems include two main components: pest identification and monitoring, and the use of multiple management tools.

Pest management decisions should be informed by an understanding of a pest’s biology and role in the agroecosystem. An unidentified organism may or may not be a pest. Some pest species may have little damaging impact while others warrant immediate control.

It is also important to measure pest populations and the damage they cause. Scouting for or trapping a pest allows managers to determine when a population reaches the threshold likely to cause economically significant losses in quality or quantity. Applying pest control when it is not necessary can negatively impact the bottom line, contribute to resistance and degrade environmental health. Monitoring also allows managers to evaluate the results of pest control efforts and modify future tactics accordingly.

Use of multiple management tools

IPM is approached as a system within which chemical controls represent only one of many available tools. The IPM system begins with prevention. Sanitation, for example, can eliminate pest inoculum before an infestation ever develops. When pests are unavoidable, cultural management such as the selection of resistant varieties or manipulation of plant spacing can help producers limit damage. When direct control becomes necessary, mechanical means like cultivation for weeds can eliminate pests without the dramatic selective pressure of certain pesticides.

When chemical controls are used in an IPM system, pesticides with different active ingredients and modes of action are used in rotation and applications are made according to label directions. Leveraging multiple pest management tools in a systems approach limits and varies the selective pressure imposed on pest populations. This makes the development of pesticide resistance less likely and helps to control resistance that is already present in a population.

While the principles of IPM are fairly simple, application in the field and the achievement of pesticide resistance management can be more challenging. Equip yourself to meet the challenge by attending Michigan State University Extension’s 2013 IPM Academy, Feb. 19-20, at the Okemos Conference Center in Okemos, Mich.

There are many morning and afternoon sessions to choose from, including an afternoon session on “Emerging Issues in Field Crop Pest Management/Resistance.” Read more information on all sessions and how to register.

The cost of this event is $225 per person. Please note that snacks, lunch and parking are included. Lodging is not included, but special rates are available. Registration is open through Feb. 12, but space is limited so register today.