Preliminary results from the first-ever plastics study in southern Lake Michigan give a whole new meaning to the phrase “it all comes out in the wash.”

Microbeads have drawn a lot of public and political attention since 2012, when researchers from New York and Wisconsin discovered millions of the tiny particles in several of the Great Lakes. Microplastics were a featured topic at the 2014 Great Lakes Conference, co-sponsored by the MSU Institute of Water Research, Michigan Sea Grant, and Michigan State University Extension among others. The new study suggests microfibers may be an even larger concern in at least a few areas.

The small fibers are most likely from our clothes, particularly ones made with polyester or polyurethane. With every wash cycle, thousands of these colorful synthetic fibers are flushed down the drain, through sewage treatment systems, and into local rivers and lakes.

That’s exactly what’s happened in southern Lake Michigan. There, microfibers from clothing and other sources have been found in higher concentrations than any other microplastic, setting it apart from the other Great Lakes. 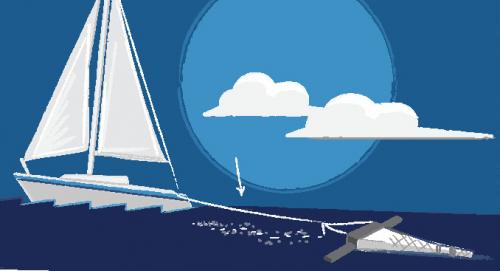 “This isn’t surprising,” said Dr. Sherri Mason, a chemist from State University of New York at Fredonia. “Lake Michigan is cold, and its coasts are heavily populated. And to top it off, its unique currents trap pollutants in the lake for long periods of time. It’s a perfect storm of factors that could lead to high levels of microfibers.”

Mason discovered the unusually high number of microfibers after examining the results of a 2013 sampling trip conducted by her lab, Illinois-Indiana Sea Grant (IISG), and the plastics research group 5 Gyres. The team spent three days traversing the southern tip of the lake, collecting a total of 16 water samples. Final results are still to come, but Mason’s initial analysis found plastic pieces in every sample.

Of course, they weren’t all microfibers. The highest number—roughly 45,000 pieces per square kilometer—were fragments slightly smaller than a bottle cap. Plastic microbeads, wrappers, pellets, and foam were also found all across southern Lake Michigan.

“The results in southern Lake Michigan really drive home the need for more research on plastic pollution in the Great Lakes,” said Laura Kammin, IISG pollution prevention program specialist and part of the 2013 sampling team. “We’re getting a handle on how much is in the lakes, but we still have a lot to learn about where the plastics are coming from, how they are breaking down, and how they are affecting the food webs.”

Years of ocean research give some insight into the potential environmental impacts of plastic pollution. For example, chemical contaminants and bacteria can latch onto floating pieces of plastic and hitch a ride to new ecosystems. And, if fish and other wildlife mistake the pieces for food, plastic pollution could also alter feeding behaviors and transfer the toxins they carry into food webs.

Early research in the Great Lakes, led by University of Wisconsin-Superior’s Lorena Rios Mendoza, has already shown that polycyclic aromatic hydrocarbons created by burning fossil fuels build up on plastics in Lake Erie. In high levels, these PAHs can be a threat to both wildlife and human health. And anglers and state agencies across the region have reported finding plastic in the stomachs of fish and birds. Researchers are still investigating how widespread and significant these impacts are.

In the meantime, several states are looking to limit future plastic pollution through legislation. Earlier this year, in fact, Illinois became the first state to ban the sale of personal care products containing microbeads. The law will take full effect in 2019.

Michigan Sea Grant, a collaborative effort of the University of Michigan and Michigan State University, promotes knowledge of the Great Lakes through research, outreach and education. Michigan Sea Grant is part of the NOAA-National Sea Grant network of 33 university-based programs in coastal areas around the country, including Guam and Puerto Rico.

Learn about aquaculture from experts through new webinar series