We began treating half of the ash trees at two golf courses with basal soil drenches of imidacloprid in 2004. After four years, the treated trees are healthy and nearly all of the control trees are dead. Treatment consisted of mixing Merit 75 (the homeowner product, Bayer Tree and Shrub Insect Control works just as well) in a bucket of water and pouring it around the base of each tree sometime in the month of May each year. The amount of Merit 75 used was determined by the diameter of the tree as specified on the product label.

In tests at Bay Pointe and Barton Hills, all of the ash trees with less than 60 percent canopy thinning and dieback in July of 2004 (two months after the first basal drench) survived and looked very healthy by 2007. Many of the ash trees that had more than 60 percent canopy thinning and dieback in 2004 did not survive. Even though we have had excellent results in our research tests with basal soil drenches of Merit, we have still seen sites were imidacloprid soil treatments failed to save ash trees.

Most of the failures are with very large ash trees growing in dry soils, where the imidacloprid was applied out to the drip-line instead of at the base of the tree, or when less than the maximum label rate was applied. The basal soil drenches are extremely reliable for small ash trees (less than 10” dbh) in good health, and for larger ash trees in good health and in moist soil (or watered during periods of dry weather). For heavily infested ash trees (but still with less than 60 percent dieback), you may want to consider a trunk injection with imidacloprid or emamectin benzoate and imidacloprid basal drench the first year followed by basal drenches in future years.

**Indicates treatment mean is significantly from the control mean at P = 0.01 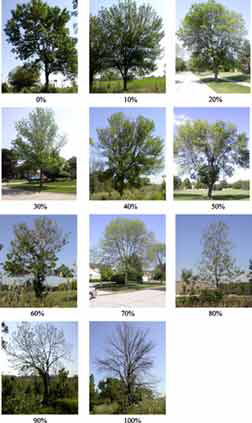