Promoting US national interests through supporting agricultural development in Africa

Updated from an original article written by Thomas Jayne.

Thomas Jayne's testimonial at the U.S. House of Representatives, Committee on Agriculture, regarding The Next Farm Bill: The Future of International Food Aid and Agricultural Development. 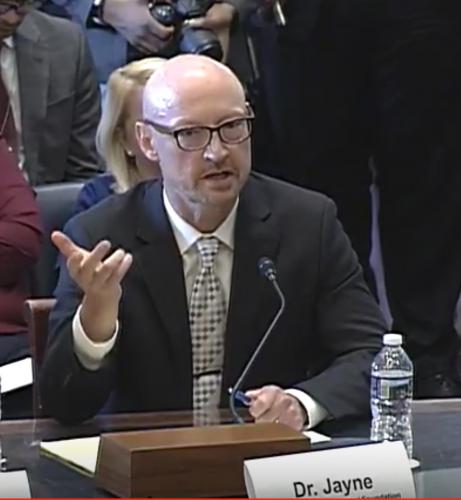 On June 7, 2017, Thomas Jayne, MSU University Foundation Professor, testified at the U.S. House of Representatives, Committee on Agriculture, regarding The Next Farm Bill: The Future of International Food Aid and Agricultural Development.

Jayne’s presentation focused on three points that explain why it is in the United States’ national interest to support agricultural development in African countries.

First, the main source of growth in the world’s demand for food will be in developing countries.  Sub-Saharan Africa’s food imports have risen 7-fold over the past 15 years and continue to rise rapidly with this region’s rapid population growth. Sub-Saharan Africa is projected to contain 24% of the world’s population by 2050. Income growth in Africa will further accelerate the region’s demand for US food exports and support hundreds of thousands of US jobs at home as well as abroad. With 70% of the African population engaged in farming, the agricultural sector is the main entry point for improving livelihoods and encouraging the region’s transformation to a more diversified and prosperous economy.

Secondly, agricultural development contributes to economic stability and peace. It is an important source of employment for African youth, when 65% of the population is under 25 years of age. Agricultural sector growth and gainful youth employment is one of the most effective ways to avert recruitment of youth into extremist groups.

Thirdly, US development assistance projects ‘soft power’. It generates good will and influence at all levels. It’s a strategy increasingly employed by China, who educates over 1,000 Africans per year in Mandarin, offers them advanced degree training in China, and supports their integration into influential private and public sector positions in their home countries.

For at least all these reasons, it’s in the best interest of the US to further support agricultural development in Africa.

See also Jayne’s article in The Conversation (February 1, 2017): Why the US Has a Lot to Gain from Investing in Africa’s Agri-food Systems
This article is based on the Full Report commissioned by the Farm Journal Foundation: “Enhancing United States Efforts to Develop Sustainable Agri-food Systems in Africa.”

What is the intrinsic value of fertilizer? Experimental value elicitation and decomposition in the hill and terai regions of Nepal

Challenges and Opportunities for Women in the Rwandan Coffee Sector

Challenges and Opportunities for Women in the Rwandan Coffee Sector