This time of year the lab frequently receives samples and phone calls from clients concerned about blue spruce with needle drop symptoms. Many of these are from home landscapes, occasionally they are from commercial growers. Sometimes people jump to the conclusion that the needlecast was caused by Rhizosphaera, a common disease seen on spruce in Michigan. Rhizosphaera needle cast can be confused with other problems so a review of symptoms caused by Rhizosphaera is in order. 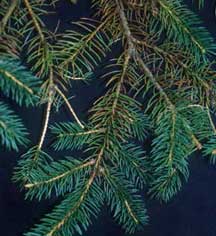 Beginning in the spring, Rhizosphaera spores are released and spread in the tree canopy by splashing water (from either rain or irrigation). These spores infect needles beginning in the spring; first year needles on lower branches are most commonly infected. The infected needles remain on the tree, usually with no visible symptoms, throughout the growing season. Subsequently, in late winter or early spring these infected needles turn brown (Figure 1). Late in the summer or fall the needle drop phase begins. This creates a pattern where branches have needles on the outer most portion (newest growth) but are bare further back toward the center of the tree (on previous year’s growth). Note: for information on control of Rhizosphaera consult a previous article in the MSU Landscape Alert from May 4, 2007. (http://www.ipm.msu.edu/cat07land/l05-04-07.htm#7) 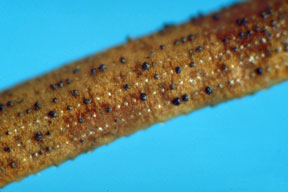 To distinguish Rhizosphaera from these other “look alikes” one must use good magnification and look carefully at structures emerging from the needles. Rhizosphaera pycnidia (fruiting structures) are rooted in the stomates, they protrude in rows. These structures are most readily found on brown needles. The pycnidia are spherical and have an even outer surface. If the outer surface of the pycnidia is not smooth, for example it has hair like appendages protruding from it, it is not Rhizosphaera.

There are other factors that cause needledrop on spruce. Some of the spruce samples we receive have signs of great growth but all the needles on the growth have dropped (Figure 3). On these samples, we generally are able to rule out the presence of insect pests and Rhizosphaera. The phenomonen is attributed to environmental or cultural causes. Environmental or cultural causes include a lot of things such as drought stress, extreme temperature fluctuations, poor site conditions, soil compaction, etc. We (and our clients) are commonly frustrated with our lack of ability to specifically identify a specific cause. From a diagnostic perspective, it is very difficult to go back in time, maybe as far back as a year, and pin point the specific cause.