Due to the hot 2012 season, the third generation of San Jose scale could be significant in orchards where earlier generations were not controlled. Traditionally, this insect has been thought to have two generations per season in Michigan. However, trapping information later than September 1 for this insect is generally not available for past years.

San Jose scale cause damage to fruit and branches of all tree fruit through feeding and toxin injected during feeding. The feeding on fruit is conspicuous on apples and peaches where scales cause bright red spots. Over the last few seasons, growers have been seeing more fruit damage from this pest. 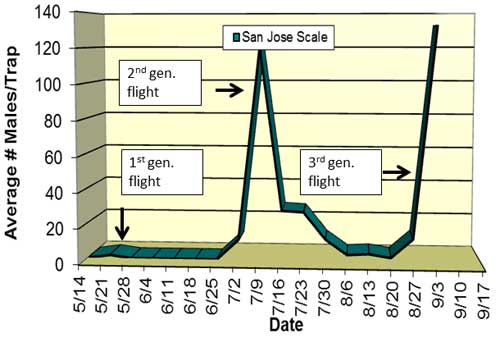 The San Jose scale biofix for the third generation was set at August 27 for the Trevor Nichols Research Center near Fennville in southwest Michigan. A growing degree day (DD) base of 51 degrees Fahrenheit is used for San Jose scale, with 2,503 degree days accumulated from January 1. Crawlers for this generation are expected 400 to 450 DD base 51F after this biofix, which is 2,903 to 2,953 DD base 51 F from January 1 at the Bainbridge/Watervliet Enviro-weather station. Based on the Enviro-weather forecast for this station, we estimate that crawlers of this insect should begin emerging approximately September 21 for the southwest region. Hot or cold weather could push this prediction earlier or later.

Elsewhere in the state we do not have the detailed San Jose scale trap information to pinpoint the start of the generations. However, we can expect the San Jose scale generations to be behind those in the warmer southwest. Looking at the degree accumulations at Enviro-weather stations around the state, these other stations lagged six days (Romeo) to 15 days (Traverse City) behind southwest Michigan to reach the similar degree day accumulation starting on January 1 (Table 1).

Table 1. Comparison of degree day accumulations base 51 F
from January 1 for four Enviro-weather stations in 2012.

* 8/27/2012 was the date that the third generation of San Jose
scale male flight began in southwest Michigan.

The take-home message is that growers and scouts should check their orchards for evidence that San Jose scale has been active this year, and if so, consider control options based on the amount of scale and opportunities for treatment. If new scale numbers are very small and the fruit crop is gone, treatment of scale in the early spring of 2013 may make more economic sense. Information on control options for San Jose scale can be found in the MSU Extension article Time for San Jose scale.