Scouting for blossom blight symptoms of fire blight in apples

Scouting for blossom blight symptoms allows you to gauge how effective your protection was during bloom. This article describes the blossom blight or spur blight phase of fire blight with pictures taken in southwest Michigan.

Fire blight is a serious bacterial disease of apples and pears. Fire blight attacks all tissues of apple trees: blossoms, leaves, shoots, branches, fruits and roots. The bacterial pathogen Erwinia amylovora that causes fire blight is harmless to humans. The bacteria usually enter the tree through flowers during bloom. Under rainy conditions, the bacteria then move into the tissues of the flower and the rest of the flower cluster. This infection causes the death of the flowering spur, which is often the first visible symptom of the disease.

Once established in the tree, fire blight quickly spreads from the current season's growth into older growth. Death of infected branches is rapid and the leaves do not have time to fall off the tree. Young, non-bearing and newly bearing trees can easily be killed by the infection while mature-bearing trees usually survive even if all the new growth is killed. 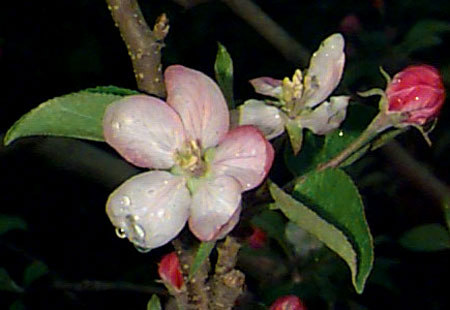 Blossom infections are initiated by bacteria carried to open blossoms during bloom by bees and other insects. The bacteria thrive on the stigma of open blossoms where pollen lands to pollinate the flower. With warm temperatures, bacterial numbers can quickly rise to incredibly high numbers on the nutrient rich exudates of the stigma, but do no harm there.

Often the initial fire blight symptom seen in an orchard, blossom blight usually indicates where the pathogen first gains entry into the tree. The bacteria kill the flower (blossom blight) and often the spur (spur blight). The damage may resemble frost injury to fruit spurs. 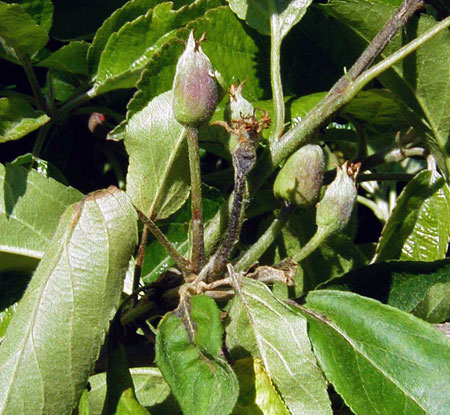 Photo 2. One flower in this cluster was infected with the fire
blight bacteria. Photo credit: Mark Longstroth, MSU Extension

Blossom blight symptoms are hard to see unless you are actively inspecting the bloom for fire blight symptoms or assessing fruit drop to make thinning decisions. Affected tissues first have a water-soaked appearance that quickly turns black or brown. The bacteria then moves out of the infected blossom cluster and symptoms of necrotic (dead, brown or black) tissue can be seen in nearby leaves and fruit. These symptoms appear where the petiole joins the leaf or fruit.

The time of appearance of the symptoms depends on the temperature after infection. The warmer the temperature, the sooner symptoms appear. In Photo 2, you can see not only the infected fruitlet, but leaf symptoms on some of the spur leaves as the bacteria have begun to move out of the fruit. The first leaf symptom is dying tissue where the petiole or leaf stem meets the leaf blade. 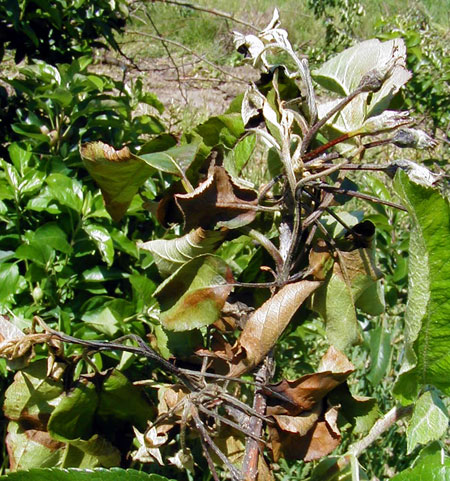 Photo 3. This fire blight infection has spread from one cluster to
other shoots and leaves. Photo credit: Mark Longstroth, MSU Extension

Spur blight is the collapse of entire spurs after the initial fire blight blossom blight symptoms on single flowers, the bacteria begins to move inside the plant, killing nearby tissues. Photo 3 shows spreading fire blight where nearby tissues are collapsing as the bacteria moves into healthy spurs and shoots.

Photo 4 shows several symptoms of fire blight. The flowers on the right were infected and you can see the black stems of the flowers. The bacteria have spread into the tree and infected the shoot on the opposite side of the branch. The systemically infected shoot has orange-colored leaves at the tip and is starting to wilt. You can also see wilting leaves around the infection and the woody stem is also starting to ooze, both above and below the initial infection. 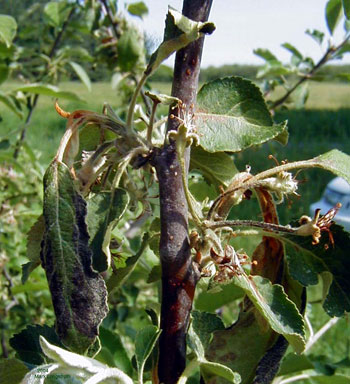 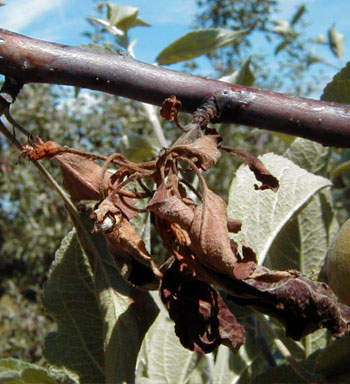 Photos  4 and 5. Left, Flowers on the cluster on the right were the first infected and the infection has
spread to the shoot on the right. Right, Older spur blight symptoms. Photo credits: Mark Longstroth, MSU Extension

The accompanying picture (Photo 5) was taken several weeks after the onset of symptoms. On this tree the infection has killed several spurs and caused oozing at the base of the spurs. This canker has not moved far, but has the potential to girdle the limb and kill the shoot. If this canker remains active it will spread fire blight in this orchard next year. 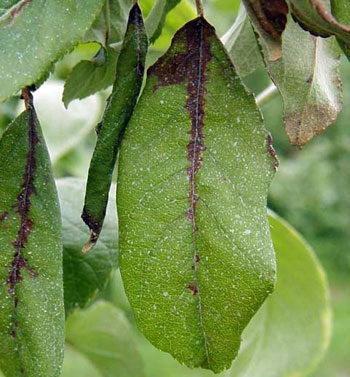 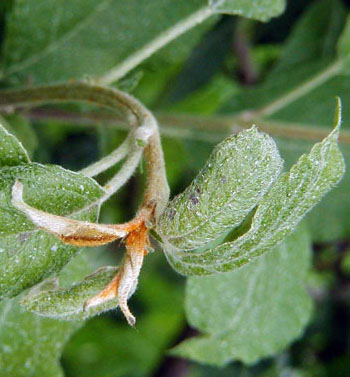 Photo 6 shows the dead tissue in the midrib of the leaves on and near an active infection indicates that the bacteria are moving through the stem and have now moved into this leaf. Photo 7 shows the orange or yellow shoot tips are often the first sign that a shoot is infected systemically and will die. The color indicates that the bacteria have arrived at the shot tip. The entire shoot will quickly wilt and die.