Seedless cucumbers are a different pickle

Seedless pickling cucumbers show up on more acreage now than they did 10 years ago, but there’s a learning curve plus economic considerations.

Seedless pickling cucumbers have been slowly making their way into commercial machine-harvested fields over the last decade. Currently, they make up about 12 percent of the processing pickle market in Michigan. American processors are attracted to the look of jars that are free of floating seeds, and the consistent sizing of these varieties. Growers are attracted to the high yield potential, a more forgiving harvest window and the automatic fruit set without trucking in bees.

However, the seeds are more expensive, and processors do not offer a premium on seedless varieties because they usually mix loads during the fermentation and brining process. So, making the most of these special varieties involves some analysis.

Seedless pickling cucumbers currently cost about $11 per thousand seeds, which is five times the $2.20 per thousand standard seeds when Michigan State University last conducted a cost-of-production for machine-harvested pickles in 2010. However, seedless pickling cucumbers are planted at almost half the population of standards. Seedless growers should target roughly 29,000 seeds per acre, compared to the standard varieties at 61,000 seeds per acre. That works out to $134 for an acre of standard pickles and $320 for an acre of seedless pickles, a difference of $186 per acre.

As a result of lower plant populations, some research points to optimal nitrogen rates between 40-75 pounds per acre for certain seedless varieties, with no side-dressed nitrogen. Assuming $0.40 per pound of nitrogen, there could be some savings here depending on a grower’s nitrogen practices for standard varieties. Some growers have observed slower emergence in seedless varieties, and current recommendations are to plant seedless varieties after the first of June in warm soil and reduce the initial nitrogen application. A pop-up fertilizer to push seedless up faster could be an option, but the threat of burning the crop is higher for cucumbers than for corn and more research could be useful in this area.

Seedless cucumbers are not like seedless watermelon or predominately female (gynoecious) pickles becuase there is no need for pollination. A seedless pickle grower does not need to interplant seedless cucumbers with a standard variety as a pollen-donor as in seedless watermelon production, and seedless cucumber seed does not include a percentage of “sire” seed from a monoecious pickle with more male flowers. Growers do not need to rent honey bees. Seedless cucumbers are truly “parthenocarpic,” which means flowers will transition into fruit production without any pollination. However, if pollen gets in the flower from a nearby standard pickle field, the fruit will develop with seeds. So, it is best to isolate seedless fields from standard fields either with time or space.

If honey bees are brought in to pollinate a nearby standard pickle field, they may shift their focus to the seedless field when the standard field starts setting fruit. If they bring pollen with them, it will result in seeded seedless pickles, with more nubs and crooks from uneven pollination. If we subtract the cost of honey bee rentals, which averages $57 per colony and 0.5 colonies per acre for pickle pollination, we get a credit of $28.50 per acre.

Shape and size at harvest

European pickle growers use hand labor to target a higher proportion of smaller sizes (less than 1.0625-inch diameter) for gherkins and sweet pickles. American growers often use once-over harvest machines to target the 2A/B (1.0625-1.5-inch diameter), and 3A/B sizes (1.5-2-inch diameter) for sliced, stacker and spear pickles. This process depends on a predictable number of similar-sized fruit per plant. A uniform size is desirable for growers and processors, and despite varying yields, this is where seedless pickles show more consistent performance over standard varieties. They tend to have a more consistent length and diameter and more fruit on the first set of flowers. This is because they set fruit without pollination and do not depend on proper seed fill from pollination to dictate their final shape.

Michigan growers and graders that work with seedless pickles cited a consistent 5-12 percent reduction in nubs and crooks being culled at the grading station. An additional feature growers have noticed is most seedless varieties have a longer harvest window. The plants pump less nutrients and water into the seed cavity than standard varieties, resulting in slower sizing pickles. Without considering this, a grower could run into trouble when staggering planting with standards that tend to develop more quickly. 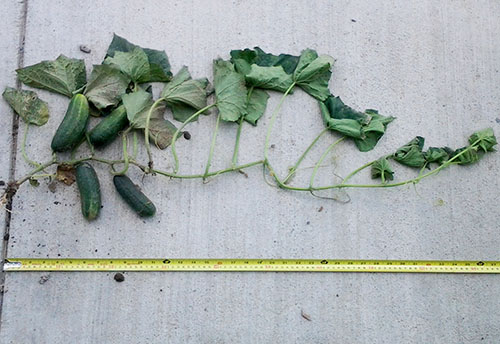 Growers want maximum yield of specific grade cucumbers. Assuming equal variable costs, substituting a $320 per acre seed cost, a $28.50 pollination credit per acre and a combined average of $4.36 per bushel of 2s-3s, a field of seedless cucumbers needs to yield about 40 bushels per acre more than a field of standards in order to break even. In our analysis, 201 bushels per acre was the breakeven for standard varieties, which also happens to be the average yield benchmark that growers can expect from them. In some years and some seedless fields, this yield gap has been attained, and the Michigan growers interviewed for this indicated they reached at least an average break-even in their seedless fields in two out of the last three years, but 2015 was a tough year for those who increased their seedless acreage.

In a 2014 variety trial at the Saginaw Valley Research and Extension Center, seedless cucumbers yielded 4.5 marketable fruit per plant on average, while the standard varieties held 2.02 marketable fruit per plant at harvest. However, in a 2015 MSU trial, seedless varieties averaged 2.3 fruit per plant. Repeated and on-going trials at the University of Guelph in Ontario and grower evaluations through independent trials in Michigan have found similar fluctuations. There have been improvements to the consistency of varieties over the last decade, and the most consistent and common seedless varieties grown in Michigan are NQ5543, NUN53014 and V5016 from Bayer (formerly Nunhems), and Gershwin, Stravinsky and Puccini from Rijk Zwaan.

Michigan State University Extension suggests growers proceed with some caution in adopting seedless cucumbers. There is still much variation as breeders continue developing consistent plant and fruit characteristics for the American market.