GMOs are less of a consumer concern than other aspects of foods.

Food labels influence consumer food purchasing decisions according to a 2017 Michigan State University Food Literacy and Engagement poll where 66 percent indicated labels were either influential or very influential. Today, consumers often see labels communicating specific production and processing aspects of food production. Sixty-five percent of Americans say they look for products labeled “natural”, 59 percent look for “low sodium”, 58 percent for “clean”, 53 percent for organic, 49 percent for non-GMO/GMO-free and 36 percent for gluten-free” (MSU Food survey, 2018).  Lusk found that 82 percent of consumers felt there should be mandatory labeling on foods produced with genetic engineering, while 80 percent felt there should be mandatory labeling of foods containing DNA, however, noting that all living things and therefore most foods contain DNA.  Federal legislation was passed in 2016 requiring labels of products from genetically modified organisms (GMO) or genetically modified (GM) plants derived from genetic engineering technology. This regulation is now being implemented.

A recent Breakfast on the Farm (BOTF) survey shows 59 percent felt that GMOs should be labeled, with 13 percent unsure. Of those who felt GMOs should be labeled, 89 percent felt people have a right to know how their food is made, 44 percent had concerns about new food technologies, and 31 percent felt GMOs are unsafe.  Other research indicates the vast majority of U.S. consumers are concerned about farm animal welfare and willing to pay more for better treatment (Wolf et al. 2016).

Food labels convey information to consumers with nutrient composition and ingredients being one important aspect that is regulated.  Companies include additional information to market their products; some information may include claims that the product is more environmentally friendly, safer, healthier, or animal welfare oriented. Labels claiming the absence of specific components have become common place in marketing products since the low-fat and no-fat labels arrived in the 1970s-80s.  These labels suggest the product does not contain some ingredient, i.e., fat, GMOs, salt, or gluten and often confuse consumers into thinking other brands of the same food item must contain the ingredient or additive.

In many cases, the “free-from” label is for an ingredient that does not exist in a particular food regardless of the brand.  While it makes sense to label certain breads and pasta with “gluten-free”, this label on meats and fruits suggests that some meats and fruit may have gluten. Non-GMO raisins or carrots would be a similar example when the only products in U.S. stores today derived from GM plants would be products containing corn, soybeans, canola, sugar beets (beet sugar), several varieties of papaya, the InnateTM potato, the ArcticTM apple and some summer squash.  In addition, oils or sugars from processed GM canola and sugar beets are refined products and do not contain DNA or proteins. Labeling salt as a non-GMO is an example of labeling a mineral which does not come from a living plant and therefore, does not contain DNA.

A glance at some food fears

By asking what aspects individuals tend to avoid when purchasing foods, we can see some potential food fears that may be prevalent with today’s consumers. In an online follow-up survey for two 2017 BOTF events, participants were asked “How often they make food purchasing decisions because they are uncertain or concerned about the following”:  Chemical additives, hormones, processed foods, can’t pronounce it, antibiotics, GMOs or pesticides. On a 5-point scale from 1= Never to 5= Always, the average responses (N=201) from high to low were: 3.43 for processed foods, 3.26 for chemical additives, 3.18 for pesticides, 3.10 for hormones, 3.01 for can't pronounce it, 3.00 for antibiotics and 2.77 for GMOs.

Another way to look at the data is to compute the percentage with the greatest concern, i.e., those who responded, “Very often” or “Always”.  These values are in Figure 1 and show a similar trend as the averages for each aspect, but provide a better picture showing that 52 percent are avoiding processed foods and only 28.9 percent are trying to avoid foods containing GM plants.

The percentage that checked “Always” or “Very often” is much higher than the overall average (frequently over 85 percent) for those who “Often” or “Always” buy organic (Table 1).  This relationship is statistically significant and shows a strong indication that those with the greatest concern about potential aspects of foods more often buy organic.   The one slight exception is there is a high percentage of those who avoid processed foods and never or rarely purchase organic, i.e., 29.4 percent and 34 percent, respectively. The category of processed foods fits a large category of foods and likely means something different to different people. These may include processed flour, potato chips and other snacks, canned foods, processed meats like bacon and salami, frozen dinners, and items with added salt or sugar. The term “clean” has been applied to non-processed foods, taking some items to the extreme such as raw milk which is not pasteurized (to kill potentially harmful bacteria), homogenized or have vitamin D added.

Consumer concerns about chemical additives, hormones, processed foods, antibiotics, GMOs, pesticides or ingredients they can’t pronounce are influencing food purchasing decisions.  It appears from this small sample from two BOTF events that consumers are most concerned about processed foods and less concerned about GMO derived ingredients. As one might guess, those with greatest concerns about these aspects of foods more likely purchase organic produced products. The drivers of some of these food concerns come from companies marketing their products as more environmentally friendly, safer, healthier, or animal welfare oriented and from organizations interested in influencing what we eat. To reduce some of their fears or concerns, consumers would benefit from a better understanding about how food is produced and processed, the safety built into our food system with regard to antibiotic and hormone use, what labels mean and how they can make more informed decisions on food purchases. 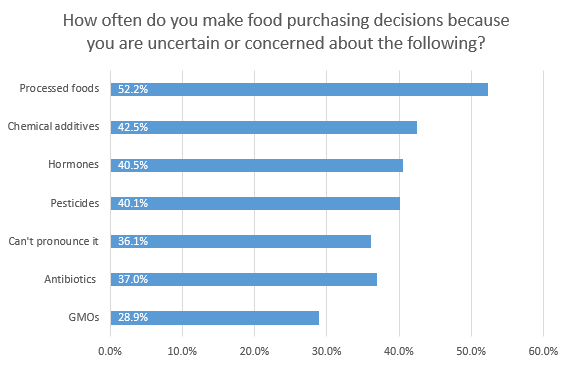 Figure 1. The percentage of those that responded Very often or always on a 5-point scale (1= Never, 2= Rarely, 3= Sometimes, 4= Very often, 5 = Always) that they are uncertain or concerned about the following aspects when making food purchasing decisions (N= 201). All images by Ted Ferris, MSU Extension.