Sinking of the Edmund Fitzgerald just one of the stories Whitefish Bay site shares.

Those who follow Great Lakes shipwreck history know well that the Whitefish Point Light was the one sought in vain by the Edmund Fitzgerald on that pitch black night in November 1975, when she went to the bottom just a few miles distant. The Great Lakes Shipwreck Historical Society commemorates this loss with a memorial program at the museum on November 10th every year. The museum also has on display the ship’s bell of the Fitzgerald that was recovered in a joint Royal Canadian Navy, National Geographic and Shipwreck Society operation.

But this museum tells more than the story of the Fitzgerald. Artifacts from over a dozen sunk along what is known as “Lake Superior’s Shipwreck Coast” are on display to tell the tales of many a midnight ship that keeps the Fitz in good company.

Perhaps just as compelling to the visitor is the adjacent Whitefish Point Lighthouse and keepers quarters. Constructed at the beginning of the Civil War, the quarters stand as a testament to the men and women of the U.S. Lighthouse Service and the U.S. Life Saving Service. At that time, the first Soo Lock was newly opened to permit ships carrying copper and iron ore from the Upper Peninsula to the steel mills along the lower lakes. Visitors can walk through the restored quarters and hear firsthand accounts of the courageous efforts made to ensure that the crews of those often-underpowered ships made it into the relative safety of Whitefish Bay. The tour allows the visitor to glimpse the spiral staircase and operating light atop the tower – still a functioning Coast Guard light today. The museum also facilitates Tower climbs on a reservations basis.

A restored non-motorized Surf Boat gives visitors a good idea of the challenges faced by U.S. Life Saving Service personnel who confronted the pounding waves of icy Superior as they mounted rescue attempts. On a sunny summer day, it is difficult to imagine what those lifesavers encountered in their efforts to save sailors from certain death. For a fuller experience, try standing on the shore in the midst of a gale on a dark November night. It was on such a night in 1926 that the lifesavers rescued the crew of the doomed steamer Zillah.

The Great Lakes Shipwreck Historical Society is a valuable resource for archaeologists, historians, sailors, and educators, and offers a student internship in collaboration with Lake Superior State University. The Society operates its own research vessel, the R.V. David Boyd; educational seminars for the public are offered each year; and school groups find Whitefish Point a fascinating class trip destination.

After your visit to the Great Lakes Shipwreck Museum, you may learn more about shipwrecks and our other maritime heritage resources by coming aboard for some of the Summer Discovery Cruises offered on both Lake St. Clair and Lake Erie each year. Sponsored by Michigan State University Extension, Michigan Sea Grant, and the Huron-Clinton Metroparks, Summer Discovery Cruises are a fun way to learn about our many historical, cultural, and natural Great Lakes resources. And if you’re a teacher, you will want to know about Michigan Sea Grant’s online lesson – The Storm that 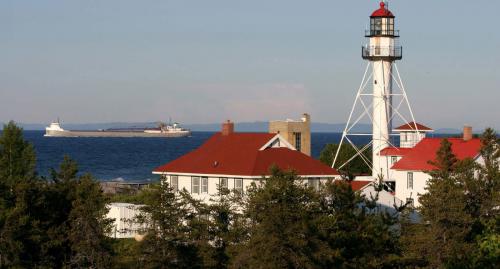 Sunk the Edmund Fitzgerald – so that you can share the history and science of the Fitzgerald’s sinking with your students.

Great Lakes freighters - and crews - get ready for 'winter layup'