Last week was milder but still humid. High temperatures rose into the mid-80s and about 5 degrees cooler closer to Lake Michigan. The overnight lows were in the mid- to low 60s, which resulted in dewy and foggy mornings.

Five out of seven days of the past week had measurable precipitation with totals ranging from 2.5 to 4.5 inches. Heavy rains occurred across the area Saturday and Monday, Aug. 20 and 22. On Saturday early afternoon, very strong winds and some tornados moved across a narrow band through Allegan and Van Buren counties in a northeast line to Grand Rapids, Michigan. Soils are wet with some flooding in low areas and heavier soils.

Potential evapotranspiration rates were lower this past week due to humid, cooler and cloudy weather, and ranged from 0.08 to 0.13 inches per day. We are still about a week ahead of normal for heat accumulation.

Peach harvest is ongoing with Coralstar, PF17, PF 19A-007, Glowingstar and PF23 in central Berrien County. Supplies and quality are excellent. Fruit sizing has been helped by recent rains. Inking symptoms are evident on blush areas of some redder type peach varieties. Oriental fruit moth flight is still strong in some orchards and damage to fruit is considerable in some locations. Michigan State University Extension highly recommends trapping so growers can judge which blocks are experiencing high oriental moth pressure (more than approximately 20 moths per trap per week). High trap counts are sometimes correlated with insecticide resistance problems.

Constriction canker (phomopsis) is causing gumming of branches and terminal decline. Brown rot control programs should rotate among the different classes of fungicides to stave off resistance problems. Save the most effective fungicides for when ripening fruit are coloring and most susceptible to infection.

Cherry leaves need to be protected from cherry leaf spot all season, ideally to keep the foliage in good shape through September. Cherry leaf spot disease pressure has been relatively light in most tart cherry orchards due to relatively dry conditions up to now. Growers can do modest pruning in cherries after harvest through August.

Plum harvest of Vanier, NY6, Castleton and Fortune is underway in central Berrien County orchards. Bacterial spot and brown rot are the primary fruit disease disorders as well as some obliquebanded leafroller feeding damage. Brown rot spray programs should be tightened up as fruit start to color and ripen. Brown rot infected fruit should be knocked off the tree to reduce future disease problems. 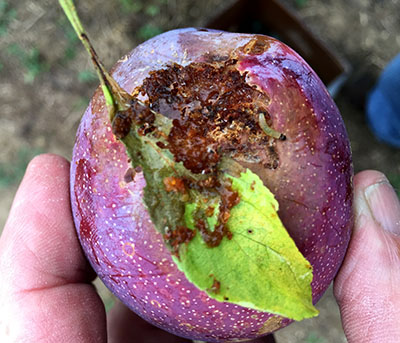 Apple harvest date estimates are available from MSU Enviro-weather for weather stations across Michigan. Retain applications for fruit drop and harvest delay management are targeted for 30 days before expected harvest. Ginger Gold and Paula Red harvests are generally done, and SweetTango will start soon. At the Southwest Michigan Research and Extension Center, Zestar is testing mature with 13.5 pounds of firmness with average starch conversion of 5. Main season McIntosh are testing 19 pounds with starch indices of 3 and are ahead of Gala fruit, which are testing immature with very firm flesh pressures of 22 to 23 pounds and starch removal indices of 1 to 1.8.

Fruit entry holes from the larvae of codling moth or oriental fruit moth are easy to be found in unprotected fruit. Obliquebanded leafroller trap catch for the summer generation numbers are up for the fourth week and larvae from this generation are webbing leaves and feeding on fruit. Apple maggot trap catch numbers continue to be significant in the Trevor Nichols Research Center trap line this past week (see “Managing apple maggots with insecticides” for more information).

Sooty blotch and flyspeck disease symptoms are common in unsprayed apples. A general rule of thumb is reapplying fungicides for these diseases after an additional 220 hours of leaf wetness, or 2 inches of rain has occurred following application. The recent rains will increase problems from these diseases.

Pear fruit are generally 2.25 inches or more in diameter. Bartlett harvest has begun in some area farms. Some fire blight damage to fruit is being seen. Pears are generally tested for firmness, peel removed, with a penetrometer equipped with a 5/16-inch probe. Bartlett testing 19 to 23 pounds are considered hard ripe, 17 to 18 pounds are firm, and 15 to 16 pounds are firm ripe.

Grape veraison has occurred in many varieties. Growers continue with vineyard canopy (leaf pulling) and crop load management practices. The crop looks good, perhaps too heavy in some vineyards. Pressure from grape leafhoppers, potato leafhoppers and Japanese beetles remains low in most vineyards. Third generation flight of grape berry moth continues and fruit damage is increasing. There will very likely be a fourth generation of grape berry moth this year. Where pressure is heavy from the third generation, a spray at 2,430 growing degree-days from wild grape bloom may be needed. For this application, short pre-harvest interval materials should be used.

Disease pressure remains low. Downy mildew and powdery mildew infections resulting from the current rains will show up in late August into fall. Wet conditions are also conducive to botrytis and sour rot infection on clusters of susceptible varieties.

Blueberry harvest is winding down. In general, Jersey harvest is finished or ending. Elliott harvest is well underway. Storms, including some tornados, moved across Van Buren and Allegan counties this past Saturday, Aug. 20, causing havoc with some blueberry operations with damage to buildings, fruit drop and soggy fields. Growers scrambled to reapply insecticides washed off by the heavy rains.