Blueberry harvest is in full swing. Apricot, plum and peach harvest is starting.

Last week was warm with high temperatures in the mid-80s and overnight lows in the 60s. Showers moved across the area Wednesday through Friday, July 6-8, with passage of a cold front. The heaviest storms were on Thursday. These showers were widespread but spotty and dropped from less than a tenth of an inch to over an inch of rain. The region received no rain on Monday, July 11. Rainfall totals for the week were about a third of an inch. Rainfall totals for the season vary from 7 to 16 inches, with most Michigan State University Enviro-weather stations averaging about 10 inches of rain since April 1. Evapotranspiration rates have been less than 0.2 inches of water a day. Rates will increase with warmer temperatures this week.

Most soils are dry and growers should be irrigating. Field crops are showing signs of drought stress. Our daily heat accumulations were a third more than last week’s with about 30 growing degree-days (GDD) base 42, 27 GDD base 45 and 22 GDD base 50. The coming week will begin hot. High temperatures will be in the upper 80s with lows in the 60s. The passage of a cold front may bring showers or thunderstorms on Wednesday and Thursday, July 13-14. By the weekend, it will be cooler with highs near 80.

Continued dry conditions are putting stress on young orchards. Trap catch numbers for oriental fruit moth are still high. This is the second week of the second flight of this pest. Codling moth trap catch numbers are down in most orchards. Obliquebanded leafroller trap catch numbers have fallen in many orchards, but in others they are still high. San Jose scale crawlers have settled and are producing their waxy scale, reducing insecticide effectiveness. The Trevor Nichols Research Center is catching lesser peachtree borers and greater peachtree borers. Late June to early July is the time for trunk applications to control borers – check the pesticide label for preharvest interval restrictions. Scout fruit plantings close to woods, and riparian areas periodically for brown marmorated stink bug (BMSB) infestations.

Apricot harvest is midway through the season. The season spans approximately 30 days starting with the New Jersey variety Early Blush and ending with the Canadian variety Harlayne. Weather conditions have been good for red skin color and fruit flavor. The dry conditions have been good for suppressing brown rot and bacterial spot. Bacterial spot is severe in some orchards with hail damage.

Leaf drop due to bacterial spot is common for susceptible varieties in sandy sites. Brown rot control programs should rotate among the different classes of fungicides to decrease resistance problems. Save the most effective fungicides for when fruit are coloring and most susceptible to infection. 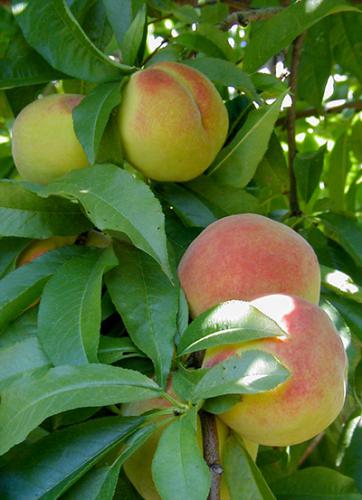 Peaches are beginning to color and harvest of the earliest varieties has begun.

Sweet cherry harvest has ended in many sites. Chlorothalonil is a good control for cherry leaf spot after harvest. Growers can do modest pruning after harvest as late as early September on mature sweet cherry trees that have filled their space.

Tart cherry harvest is over for most southwest Michigan orchards. Post-harvest is a good time for trunk sprays to control borers. After harvest, growers should use chlorothalonil to prevent cherry leaf spot. Copper can also be used on tart cherries.

Apple fruit are over 2 inches in diameter. Growers have been applying summer NAA programs to encourage return bloom next year. Fire blight shoot blight symptoms are scarce and the dry weather has limited spread. Trauma blight symptoms following hail have appeared. Growers should scout their orchards for apple scab lesions to see if they need to continue their scab program.

Fruit entry of codling moth or oriental fruit moth has been noted in several area orchards. Codling moth trap catch numbers are still high in some orchards; it’s been eight weeks since the first catch. Growers should use insecticides aimed at larvae. We are catching good numbers of obliquebanded leafroller and young larvae of this generation are feeding on foliage. Green apple aphids are building on the new growth in orchards with new growth. 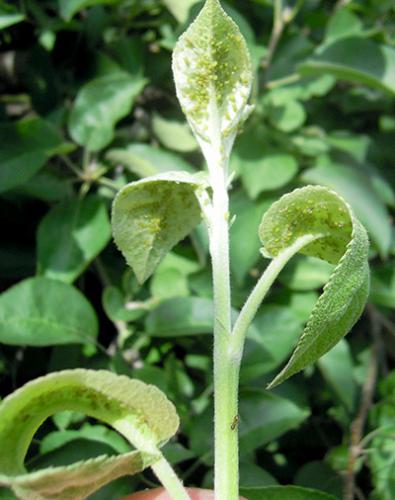 Green apple aphid numbers are building and colonies can be found on the actively growing shoots.

Sooty blotch and flyspeck diseases requires about 220 hours of leaf wetness starting 10 days past petal fall to begin infection, which is the approximate timing to start fungicide programs for these two diseases. In checking the Enviro-weather stations for the region, the accumulated hours of leaf wetting due to rain and dew differ greatly from site to site. Growers should adjust their disease management program accordingly. For example, as of July 11, the accumulated wet hours for Southwest Michigan Research Extension Center are 254, Fennville 213, Hartford 464 and Berrien Springs 472. A general rule of thumb is reapplication of fungicides for these diseases after an additional 220 hours of leaf wetness, or 2 inches of rain has occurred following application.

Pears are over an inch and a half in diameter. Removing succulent water sprouts from the inside of the tree helps to reduce sites for pear psylla population growth. Pear scab symptoms can be found on the leaves and fruit of unsprayed trees. Sticky leaves due to pear psylla honeydew can be found in some orchards.

SWD trap numbers are starting to rise in southwest Michigan and we are catching SWD in more traps each week. SWD were trapped in greater numbers this week in raspberry and blueberry plantings. Growers with ripe fruit should be protecting against this pest now. We expect SWD numbers to increase through July and surge at the end of the month. Japanese beetles are easier to find. Numbers will increase after rains in July.

Juice grapes are at berry touch and approaching bunch closure. Vinifera grapes are also sizing rapidly in the recent heat. The window for protecting against black rot, powdery mildew, downy mildew and phomopsis in the fruit continues in wine grapes. Due to the dry weather, very little disease has been found scouting area vineyards. Phomopsis is the most common disease due to infections during wet weather during early shoot growth. Growers will now focus on protecting against downy and powdery mildew infections on leaves.

Second generation flight of grape berry moth is underway. The window for applying ingestion poisons to control eggs was last week; growers are applying broad-spectrum materials this week. Low levels of leaf-feeding pests, including grape leafhoppers, potato leafhoppers and Japanese beetles, have been spotted in area vineyards. Growers will be scouting for these pests now.

Blueberry harvest continues with the first picking of Bluecrop for fresh market. Duke and other early varieties are still harvesting. We are still catching a few fruitworm moths in some fields. We are now catching blueberry maggots. Blueberry maggot numbers will rise after rains or irrigations. Obliquebanded leafrollers were reported in some fruit. Blueberry maggots should not be a problem in fields sprayed regularly for SWD. SWD numbers are increasing in the region. This indicates the fly is now reproducing in wild fruit and can move into fruit plantings.

The dry weather has kept diseases down, but we are finding anthracnose fruit rot. In the green fruit stage, most fungicides easily prevent anthracnose fruit rot infections, even if they are applied soon after infection. As the fruit ripens, this back-action is lost. Systemic fungicides should be applied before irrigations to prevent fruit rot rather than after to try and stop the infection of ripe fruit. Use the Enviro-weather anthracnose model. Shoot collapse from phomopsis stem canker is easy to find and widespread, but this does not appear to be a severe year. Growers should be irrigating to maintain good fruit growth. Growers need to pay close attention to soil moisture.

Strawberry fields are being renovated across southwest Michigan. Growers have mowed and are applying herbicides and fertilizers. Newly emerging leaves need to be protected from potato leafhoppers. Growers with day-neutral strawberries should consider monitoring or treating for SWD.

Bramble harvest is underway on black raspberries (black caps) and summer red raspberries. Blackberries are coloring and harvest will begin soon. Soils are dry and growers should be irrigating. Raspberries and black berries are shallow rooted and benefit from irrigation under dry conditions. The ripening fruit is attractive to SWD. Growers should have traps on their farms. Some growers are picking every two days to avoid SWD. Raspberry cane borer will be attacking primocanes. 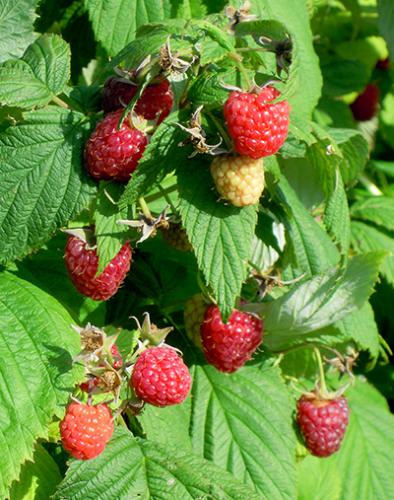 The Viticulture Field Day on July 27, 2016, will be at the Southwest Michigan Research and Extension Center, 1791 Hillandale Road, Benton Harbor, MI 49022.