The weather last week was warm with highs in the 80s and lows in the 60s. Storms moved across the region late Monday, June 30, and early Tuesday morning, July 1. Rainfall totals varied from less than an inch to over 2 inches, with 50 to 60 mph winds on Monday evening during the storms. Last week had storms on Monday, June 23, as well. Cloudy conditions with scattered showers were common.

Soils are wet, but drying out. Water is standing in some fields. Recently, rainfall has exceeded the evapotranspiration (ET). Soils were warm with temperatures in the 60s. This coming week should be cooler and drier with high temperatures in the 70s and lows in the 50s.

Last week we picked up about 232 growing degree days (GDD) base 42, about 29 per day, and 150 base 50, about 22 a day. Current GDD accumulations lag a little behind our long-term average, but similar to 2013, 2011 and 2009. See the GDDs for the last five years at Bainbridge, Michigan in northern Berrien County. We seem to be about three or four days behind our long-term average.

Strong winds with rain and some hail were widespread Monday night, June 30, in Southwest Michigan with the most severe conditions in south to central Berrien County. Tipped trees, broken limbs and flooded areas are common. Fruit of early peach varieties and some apples were knocked off trees in exposed orchard sites. Wind whip damage to tart cherry fruit may be significant, especially in tops of trees.

Apricots are 1.5 inches in diameter with red blush intensifying on early varieties.

Peach fruit are 1.5 to 2 inches in diameter with hard pits. Redhaven harvest for central Berrien County is predicted to begin approximately Aug. 3. Ripening of early season varieties seems to be behind with our current guess that varieties such as Harbinger, PF1 and Desiree will start around July 10-15 in the southern end of the district.

We are at the end of the first generation for oriental fruit moth, but catch still continues in some orchards. Trunk sprays for greater and lesser borers are still going on in the area. Bacterial spot symptoms are increasing on leaves and fruit of susceptible varieties. The wind storms of June 23, 25 and 30 will likely spread this disease further. Peach fruit are most susceptible to bacterial spot and rusty spot infection from shuck split to pit hardening.

Cherry growers need to continue protection against American brown rot and cherry leaf spot. Strong winds early this morning did blow ripe fruit down out of the trees and wide whip in tart cherries is expected to appear across the region in the next few days.

Sweet cherry harvest is continuing and will go quickly with light crop and warm temperatures. Fruit cracking is a major problem for some varieties following the rains of last Monday and Wednesday. Brown rot is becoming easier to find in tops of trees and in clustered and cracked fruit. Growers need to protect against cherry leaf spot and brown rot. Eastern cherry fruit fly was trapped last week in Northwest Michigan and this Monday at the Trevor Nichols Research Center in Fennville, Michigan.

Tart cherries are generally some version of red. Most growers have already applied their ethephon sprays to facilitate mechanical harvest. Growers are applying fungicides following the June 30 storm to help ward off brown rot following wind whip damage to fruit. Browning of fruit due to damage is already being seen in orchards. Cherry leaf spot lesions are easy to find in some orchards with some leaves already dropping. Growers should be continuing to apply sprays to control cherry leaf spot.

Japanese plums are 1 to 1.25 inches in diameter and European plums are 0.875 to 1 inches. Cracking of fruit due to bacterial spot is occurring in Japanese plums. Fruit drop is continuing in some varieties. Plum curculio and American plum borer are the primary pest concerns. Obliquebanded leafroller and codling moth can be problems in plums as we head into July.

Apple fruit range from 1.5 to 2 inches in diameter. Fire blight symptoms on terminal shoot growth are becoming easier to see in older orchards of susceptible varieties such as Gingergold, Jonathan and Gala. The recent wind and rains will likely spread this disease further. The North Carolina model for sooty blotch and fly speck diseases indicates we have received sufficient hours of wetness needed for spores to be available, and so spray programs for these diseases should begin. Oriental fruit moth and more recently codling moth catches have declined. Spotted tentiform leafminer new mines in leaves are expected soon. Obliquebanded leafroller egg hatch is expected to begin approximately July 1 for central Berrien County.

Pear fruit are 1.25 inches or more in diameter. Fire blight strikes are generally rare. Growers continue to tear out watersprouts as a way to remove protective habitats for pear psylla. Pear psylla can be found in all stages of development. The next generation of codling moth will target developing fruit.

Fruit have moved rapidly in the summer weather. Japanese beetles have emerged. Spotted wing drosophila (SWD) adults have been trapped in Berrien, Van Buren, Allegan and Ottawa counties. This fly attacks thin-skinned fruit such as raspberries and many thin-skinned wild berries. The adults move from one type of ripening fruit to another, so wild berries in the woods and fence rows can be a significant source of adults attacking commercial or backyard fruit.

Southwest Michigan GDD summary for grapes from April 1 to June 29, 2014 via MSU Enviro-weather

According to the grape berry moth model, 810 GDD base 47 are needed to complete its lifecycle. MSU Enviro-weather data in Berrien County indicates will be passing the 810 GDD base 47 threshold on July 3 or 4. MSU Enviro-weather data in Van Buren County indicates the threshold will be passed early next week on Monday or Tuesday, July 7-8. A wide variety of materials are available to control grape berry moth (see the Michigan Grape Management Guide for a list of recommendations).

Blueberry fruit are ripening. Harvest of early varieties such as Bluetta and Duke is beginning. Shoot growth higher in the bush has stopped on most shoots. Shoots growing from the crown are still growing. Cane collapse from phomopsis is showing up. Waves of cane collapse are an indicator of this disease. Winter-injured shoots are generally not collapsing. On winter-injured shoots, leaves are generally small and pale. The warm, moist conditions are good for plant growth and shoot and fruit growth look good. The crop is looking better as the fruit has sized and the fruit is much more noticeable. 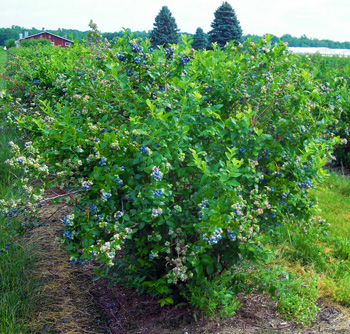 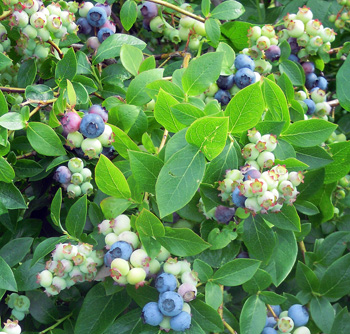 Strawberry harvest has ended. The heat of the last two weeks moved harvest quickly. Fruit quality was excellent. The emergence of spotted wing Drosophila hastened some growers to decide not to harvest smaller fruit at the end of harvest and prepare for renovation (see “Time to renovate strawberries”). Since renovation is a crucial time for weed control in strawberries, MSU Extension has recommendations for herbicide choices at renovation (see “Weed control at strawberry renovation”). 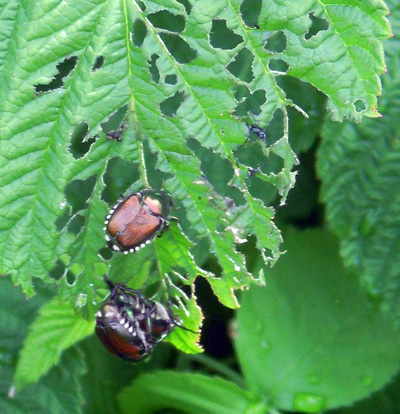 Spotted wing drosophila (SWD) have been detected in southwest Michigan (see “First spotted wing Drosophila flies of 2014 detected in MSU Extension monitoring network”). Raspberries seem to be the favorite fruit for SWD and growers should be trapping to determine if controls are needed. MSU Extension has posted SWD recommendations for raspberry growers. More information is available on the MSU Spotted Wing Drosophila website. Some growers report bloom on the primocanes of some fall-bearing berry varieties. Raspberry cane borers are attacking primocane tips. Affected tips wilt and are easily noticeable. A pair of rings chewed into the cane below the wilting tip mark the site of egglaying.

A Twilight Pre-Harvest Blueberry Meeting is scheduled for Wednesday, July 2, at the Olive Township Hall from 6-8 p.m. The meeting is a repeat of the June 18 meeting near South Haven, Michigan. There will be two RUP credits available at this meeting. For more information, see “2014 Blueberry pre-harvest meetings.”