Strawberry harvest continues and birds are feeding on cherries.

The weather last week was a little cool. Highs were in the upper 70s and lows in the 50s. Lows dropped into the 40s over the weekend. Widespread showers with a cold front on Wednesday, June 11, brought rain during the day. Soils were moist, but dried out quickly. Growers should be irrigating. The evapotranspiration (ET) is about 0.2 inches per day. Soils were warm with temperatures in the 60s.

This week will be warm and wet. High temperatures will be in the upper 80s and lows in the 60s. Rain is in the forecast for most of the week. Last week we picked up about 160 growing degree days (GDD) base 42, about 23 per day, and 110 base 50, about 14 per day, almost identical to the previous week. Allegan County in the North is still a week behind Berrien County in the South. GDD accumulations lag behind our long-term average, but similar to 2013, 2011 and 2009. See the GDDs for the last five years at Bainbridge, Michigan in Northern Berrien County. We seem to be about three or four days behind our long-term average.

Growers removing trees due to winter cold injury should contact the USDA Farm Service Agency (FSA) office serving their county first for pre-inspection, which is required for the USDA Tree Assistance Program (TAP). Dry conditions in sandy sites have been stressing trees. Hand-thinning of apples, peaches and pears is still underway. San Jose scale crawler emergence is expected to begin over the next week in Berrien County.

Apricots are over 1 inch in diameter with hard pits and foliage looks good.

Peach fruit are 1.25 to 1.5 inches in diameter, with pit hardening a week or two off. Redhaven harvest for Central Berrien County is predicted to begin approximately Aug. 3, based on a GDD model developed at Michigan State University. Some varieties are showing doubled fruit. This doubling is due to stressful conditions during bud set last summer.

More tip dieback of shoot tips from oriental fruit moth larvae entries has showed up over the past. Oriental fruit moth catch has declined over the past week as we draw to the end of the first generation. Both greater peach tree borer and lesser peach tree borer adults have been caught in the last two weeks. Borers require trunk sprays or pheromone disruption. Bacterial spot is relatively rare on leaves so far. Wind storms with rain help propel this disease. Peach fruit are most susceptible to bacterial spot infection from shuck split to pit hardening, which is still a few weeks off for Berrien County. Peach fruit with susceptibility to rusty spot disease should be protected from shuck split to pit hardening.

Sweet cherries are 16 to19 millimeters in diameter. There is some drop of early coloring fruit. Harvest of early season varieties should start early next week for Central Berrien County. Foliage is relatively free of bacterial canker and cherry leaf spot symptoms. Growers need to protect against cherry leaf spot. Sweet cherry fruit is always susceptible to brown rot and growers are reminded that Michigan State University Extension has found that brown rot is resistant to FRAC code 11 fungicides (strobilurins) in the area.

Tart cherries have colored red over the past week and the pits are hard. Fruit damaged earlier by plum curculio or with poor pollination are dropping. The crop looks normal to light for Southwest Michigan, but better than 2013. Cherry leaf spot lesions are easy to find in some orchards. Growers should be applying sprays to control cherry leaf spot with plum curculio on the decline. Ethephon sprays to facilitate mechanical harvest are applied after all the fruit have colored to yellow.

Japanese plums are 20 to 25 millimeters in diameter. European plums are 20 millimeters. Fruit drop has been heavy in some varieties. Black knot, plum curculio and American plum borer are the primary pest concerns.

Apples range from 1 to 1.5 inches in diameter. Deer feeding has increased on tender shoot tips. Apple scab ascospore catch was zero in Wednesday’s rain last week, June 11, signaling a possible end to primary scab season. Apple scab symptoms are easy to find in abandoned orchards. Apple fruit are susceptible to scab infection until they form a waxy coat when they are about the size of walnuts. Fire blight symptoms from blossom infections continue to develop in some southwest apple orchards.

The North Carolina model for sooty blotch and fly speck diseases indicates we have received only about 100 hours of the 250 or more hours of wetness needed for symptoms, so symptoms are not expected soon. Oriental fruit moth trap catch has declined and codling moth catches are still relatively high. Spotted tentiform leafminer numbers are declining. Obliquebanded leafroller egg hatch is expected to begin approximately July 1 for Central Berrien County.

Trees that were girdled by mice or rabbits are beginning to exhibit symptoms. Tree growth looks poor from a distance with yellow leaves as the trees exhaust the reserves stored in the bark and wood of the shoots. The roots are still able to supply water, but at a reduced rate. Eventually the trees will collapse as the roots starve or the top of the tree runs out of water. In many cases there are many new shoots coming up from the rootstock. 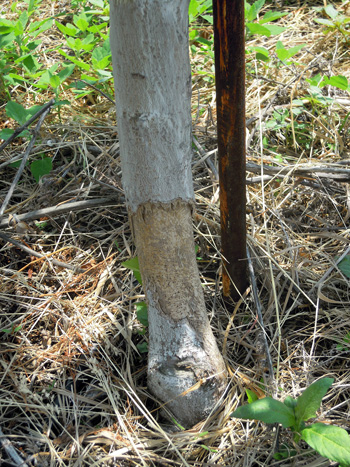 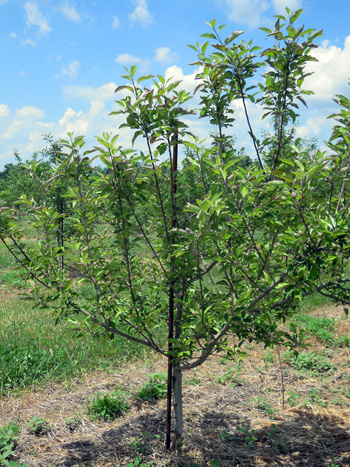 Mouse-girdled apple tree showing pale color and small leaves. Growth is poor except at the shoot tips. This tree is completely girdled and the top will die. If the rootstock is healthy, it will send up vigorous shoots from reserves stored in the roots. Photo credits: Mark Longstroth, MSU Extension

Pear fruit are 18 millimeters or larger in diameter. Primary scab season is essentially over for most orchards. Fire blight strikes are generally rare. Pear psylla can be found in all stages of development.

Grape bloom is ending in juice grapes. Shoots are about 24 inches long. Generally, juice grapes look good where they did not suffer spring freeze injury. Some hybrid wine grapes look good, but many vinifera vines were damaged by the winter cold. Shoot growth from winter-damaged vines is well underway. Some vineyards will have a marketable crop of vinifera grapes, especially those close to Lake Michigan.

Southwest Michigan GDD summary for grapes from April 1 to June 15, 2014

The post-bloom period is critical for disease control in grapes. Several post-bloom sprays to control black rot, phomopsis, powdery mildew and downy mildew are applied at 10- to 14-day intervals following bloom to protect green fruit. Rose chafers are out. Grape berry moth larvae are found feeding in clusters. MSU Extension recommends growers target the second and third generations of grape berry moth. Tumid galls, red swelling on the leaves stems or tendrils have been reported and larvae exited a sample brought to for identification. This is a spotty problem that seldom requires treatment.

Blueberry fruit are sizing to about pea-sized. Growers are much more optimistic as the fruit sizes. Post-bloom pesticide applications are focused on preventing anthracnose fruit rot and controlling fruitworms in the green fruit. Most growers have applied one spray to control cranberry fruitworm and cherry fruitworm and will soon apply the second. We are seeing good vegetative growth from bushes with winter injury. Damage is generally more site-specific across a region and less focused on specific varieties.

Lack of irrigation or a heavy crop last year seems to have set up some fields for severe injury from the winter cold (see the Southwest Michigan fruit regional report from April 1, 2014.) In different areas, growers often give different varieties as most affected. The crop is variable around the state with much less injury in the northern growing areas and close to Lake Michigan.

Strawberry harvest is well underway with most farms picking last week. Volume and quality are excellent.

In brambles, summer red raspberries and black raspberries have green fruit on floricanes. Primocane growth from the ground is vigorous. Leafroller and sawfly damage can be found.

Cranberries are greening up and shoots are elongating.

The next weekly Monday fruit IPM meeting is June 23 at Fruit Acres Farms, 3452 Friday Rd., Coloma, MI at 5 p.m. Two Michigan restricted use pesticide (RUP) applicator recertification credits will be given for these meetings.

A Twilight Pre-Harvest Blueberry Meeting is scheduled this Wednesday, June 18, from 6-8 p.m. The meeting will be at the Beeches Golf Club east of South Haven at 9601 68th Street, South Haven, MI 49090. There will be two RUP credits available at this meeting.