Another cool, wet week is in the forecast. Growers should assess fruit set to prepare for apple thinning sprays when warm weather returns next week.

Last week started cool and wet on Monday, May 2. High temperatures for the week were in the 50s and 60s for early week and rose into the 70s for the weekend. Low temperatures were in the low 40s. According to Michigan State University Enviro-weather, there were scattered frosts on Tuesday, May 3, and Friday, May 6, which caused little damage. There were scattered showers last week and it rained steadily last Wednesday, May 4. Soils have begun to dry out and field crop growers have begun planting in sandy soils. The weekend was warm and sunny. Rainfall last week was about an inch of rain. Plants continue to leaf out rapidly.

There is a good chance of rain most of this week and the forecasts seem to change every day. High temperatures for the week are forecast to start in the 60s. Wednesday and Thursday, May 11-12, will be warmer with highs in the 70s. Temperatures will fall into the 50s for a rainy weekend. Low temperatures will be in the 40s most of the week. Temperatures could drop near freezing during the weekend or early next week when the weather clears.

Growing degree-day (GDD) heat accumulations last week were low for most of the week, but high for the weekend. We pick up more heat than last week than the week before and are still about a week ahead of normal for heat accumulation.

Stone fruit are in or emerging from the shuck. Apple bloom is ending. Because of the alternating weather between cool and wet with warm and dry weather, it has been hard to estimate how effective pollination has been. Rains last week had long wetting periods for fruit diseases, but with average temperatures in the 40s, were probably too cool for brown rot, bacteria spot and cherry leaf spot. The most significant wetting period began Wednesday, May 4, according to MSU Enviro-weather. This wetting period was a moderate infection period for apple scab. Insect activity was low last week because of the cool temperatures. Green fruitworm damage was reported on exposed sweet cherry fruit. Oriental fruit moth traps catch numbers rose last week. Eastern tent caterpillar webs are becoming more obvious. There were several extended wetting periods during the week, which were heavy infection periods for foliar diseases.

Plum curculio will be a concern when warm temperatures return. There are several temperature models used to estimate the beginning of egglaying:

We may meet the final conditions if Wednesday and Thursday are warm enough. Concerned growers will want to double-check forecast highs and perhaps cover stone fruit that have emerged from the shuck.

Apricots are out of the shuck and the fruit are about 12 millimeters in diameter.

Peaches are in the shuck. Oriental fruit moth numbers were up last week in most sites. Biofix, the first sustained flight of oriental fruit moth, was set as Monday, April 25, based on trap catches at Trevor Nichols Station trap line. The Enviro-weather oriental fruit moth model indicates egglaying has begun and sprays should be applied this week.

Rains favor bacterial spot infection of young leaves and fruit. Protecting peach fruit at the shuck split stage is particularly important for managing this disease. Varieties prone to rusty spot should be protected until pit hardening. There have been a few reports of peach leaf curl. It is too late to treat for this disease; infected leaves will fall off.

Sweet cherries are generally out of the shuck. Sweet cherries are susceptible to brown rot at all times, so growers need to maintain protection on the fruit as it emerges from the shuck. Cherry leaf spot infects cherry leaves through the stomates and, once unrolled, the leaves are always susceptible to infection. Last week’s rains were generally too cold for cherry leaf spot infection. MSU Extension advises growers to protect exposed fruit from plum curculio when warm temperatures return.

Tart cherries are at petal fall and in the shuck. Leaves have emerged and growers have been applying protectant fungicides to protect the leaves from cherry leaf spot. Most wetting periods since April 30 have been too cool for infections. Because of the cool conditions, bloom has been very spread out this season. An accurate assessment of pollination and the crop will need to wait until the fruit emerges from the shuck. 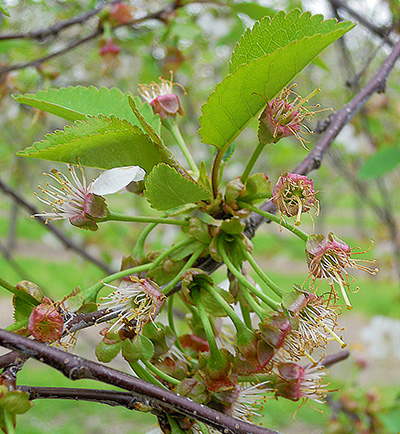 Japanese plums are in shuck to early shuck split.

European plums are at petal fall to in the shuck. Plums need to be protected against black knot from first bloom until second cover. Plum curculio will be a concern when warm temperatures return.

Apple orchards are generally in petal fall in Berrien County, with early developing varieties up to 5 millimeters in diameter. There is a wide variation in apple bloom across the region. In Van Buren County, most varieties are at past full bloom and petal fall has begun. Weather conditions this week will be too cool for any effective thinning sprays and growers need to assess their crops and prepare to thin when warm weather returns. On Monday, April 25, there was a fire blight infection period in some orchards in Berrien County; we are only about 50 percent of the way to when symptoms from this infection will be visible. The fire blight bacteria requires temperature above 65 F to multiply quickly and it can take weeks for symptoms to appear under cool conditions.

Apple scab ascospores numbers continue declining from the peak releases in late April. The Enviro-weather apple scab model indicated that all apple scab spores have matured in some areas, but only 80-90 percent have discharged. Several scab infection periods were recorded in the region last week. Leaf scab symptoms have been found, probably from the April 21 infection period. Symptoms from more recent infection periods in late April should become visible later this week. Growers should scout their orchards and look for scab lesions on the leaves, especially next week. Coverage to prevent primary scab generally continues into early June.

No codling moths have been caught under these cool conditions. Spotted tentiform leafminer have been flying for about four weeks. Redbanded leafroller trap catch is declining. Leafroller larvae are feeding on the shoot tips and leaves in blocks, which did not receive prebloom insecticide sprays.

Pear bloom has ended. Pear psylla adults are flying. The post-bloom period is often used for psylla control. New leaves are tender and can easily absorb systemic materials that kill psylla as they feed. Pears also need to be protected against pear scab and fire blight. 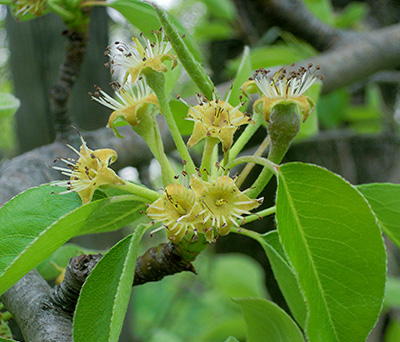 Juice and wine grapes appear to have healthy shoots and wood. Juice grape shoots are 4 to 6 inches with three to five leaves folded back, exposing the flower clusters. Hybrid wine grapes vary, but the most advanced have similar development with leaves unfolding, exposing the flower clusters. Vinifera grapes are at bud burst to 1- to 2-inch shoots. As shoot growth begins, shoot tissue is vulnerable to powdery mildew and phomopsis infection. Fungicides to control these diseases are usually applied as flower clusters become visible. Last week’s wet, rainy conditions were good for phomopsis infection. Grape berry moth flight has begun, but first generation egglaying is about a month away. 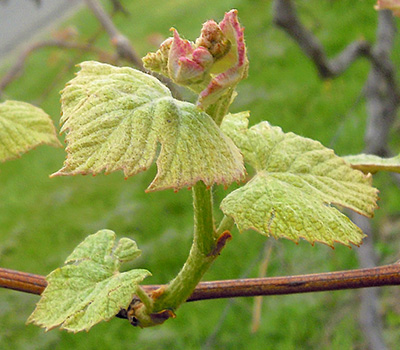 Blueberry bloom has begun in many fields and shoots are growing rapidly. We are at full bloom for some early varieties, but few blossoms are open in later varieties. Bloom is scattered with a lot of variation between sites and in the fields. After all the rain, water is standing in many fields. Growers applied sprays to reduce mummy berry infection of the open bloom. The flowers are susceptible to infection as they open and susceptibility declines as the flowers age. Sprays are timed for early bloom and mid bloom. Growers should avoid spraying in the middle of the day when bees are foraging the bloom. At petal fall, anthracnose becomes a concern and the preferred fungicide changes to include action against anthracnose, mummy berry and phomopsis.

Cherry fruitworm and cranberry fruitworm trap catches have been low to zero. These pests should emerge soon with warmer weather, See “Time to prepare for fruitworm management in blueberries” for more information. 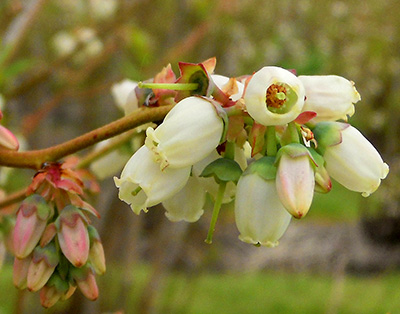 Strawberry bloom has begun. Fungicides to control fruit rots and leaf diseases are the primary concern in strawberries. Growers should avoid spraying in the middle of the day when bees are foraging the bloom. Common strawberry leaf spot is the chief concern. If the weather is wetter than predicted, angular leaf spot could be a problem. Growers have put out straw and some have run sprinklers to prevent frost damage to the exposed flower buds. 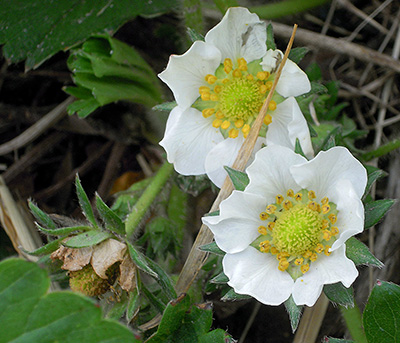 Strawberry bloom. The flower at the lower left has been pollinated and finished blooming. The flower in the middle has open anthers showing that pollen has been released, and the upper flower’s pollen anthers are still closed. Photo by Mark Longstroth, MSU Extension.

Bramble growth continues. Primocanes of fall bearing raspberries are growing well. The tallest primocanes are 8 to 12 inches tall. Leaves are unfolding in raspberries and the flower clusters can be seen. Orange rust is appearing on wild black raspberries. Effective controls can be found in MSU Extension bulletin E0154, “Michigan Fruit Management Guide.” 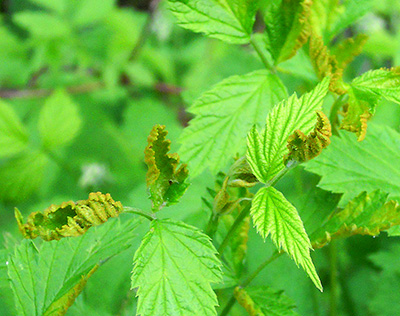 Our next Monday fruit IPM meeting in southwest Michigan is May 16 at Fruit Acres Farms, located at 2559 Friday Road, on the northeast corner of Friday and Carmody Roads, south of Coloma, Michigan, at 5 p.m. Two Michigan pesticide applicator recertification credits will be given for these meetings.