Fruit crops are looking good. With hot weather, peaches and cherries are blooming, and apple and blueberry flowers are opening.

Last week warmed up quickly with highs rising from the mid-60s to near 90 on Wednesday, May 7, and staying around 80 for the rest of the week. This summer-like weather caused rapid plant growth with leaves and flowers expanding quickly in just a few days. With this rapid growth, winter injury has become very easy to see. For some Southwest Michigan fruit crops, the damage from the winter is less than we would have received from a spring freeze. A light frost last week on Tuesday morning, May 6, did not cause any damage, according to Michigan State University’s Enviro-weather.

Rainfall across the region over the last two weeks has been light with only about two-thirds of an inch. Soils are beginning to dry and soil temperatures are about 60. Storms Tuesday morning moved across the region with rainfall totals dropping off quickly away from Lake Michigan and to the north. These storms dropped 0.6 to less than 0.1 inches of rain. Much cooler conditions and showers are forecast for this week with highs in the 50s and lows in the 40s and 30s. There is a chance of a light frost late this week on Friday or Saturday, May 16-17. We are near the end of the spring frost season and this frost is unlikely to be widespread or severe.

Field crop farmers are tilling and planting their fields. Rainy conditions are possible all this week. Exposed leaves and flowers are susceptible to disease infection, so rains can be infection periods for early season diseases. We are now less than a week behind normal fruit development. We continue to track closely with 2011 and 2013. See the growing degree days (GDD) for the last five years at the Southwest Michigan Research and Extension Center (SWMREC). Berrien County is still noticeably more advanced than other regions in Southwest Michigan.

There was very rapid growth late last week and over the weekend with quite a bit of bee activity. Peach and sweet cherry bloom is showing up in tops of trees in orchards previously thought to have no viable flowers. Growers are still assessing winter damage in young trees.

With cool weather this upcoming week, there should be no need to control plum curculio, but growers need to be aware of this pest when warm conditions return and stone fruit emerge from the shuck.

Peaches moved through bloom quickly last weekend. Bloom is ending with fruit in the shuck in many orchards. There was a good peach bloom in parts of Berrien County and some growers are blossom thinning where bloom is heavy. Areas where the winter lows did not fall much below -13 degrees Fahrenheit have a good crop, -15 F have a light crop of flowers often in the tops of the trees, and areas where the temperatures fell below -17 F have few if any blooms.

Some orchards had sufficient catch of oriental fruit moth adults to set biofix to calculate treatment timing against eggs or larvae. Cool days and cold nights forecast for this week will probably stop this first flight and growers and consultants may wish to rest biofix for oriental fruit moth when they catch moths again. Brown rot controls are needed during bloom when warm rains are expected.

Where peach scab was a problem last year, fungicides such as Bravo, Captan, sulfur, or Ziram can be used to manage the disease. This disease can build up on fruit and twigs in years with incomplete brown rot programs. Pheromone disruption dispensers for oriental fruit moth should be deployed in orchards now. Copper application for bacterial spot management, where used for this disease, should cease by bloom. Growers should scout for western flower thrip activity in nectarines as peaches move from petal fall to fruit in the shuck.

In cherries, sweet cherries are at petal fall and in the shuck in Berrien County. Foliage is relatively free of bacterial canker symptoms. Normally, cherry leaf spot controls should wait until after bloom when the leaves emerge and become functional. Cherry leaf spot infects the leaves through open stomates on the leaves. 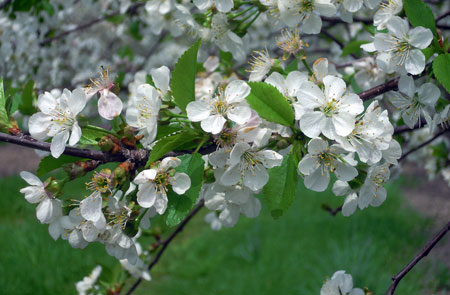 Japanese plums are in the shuck and European plums are at full bloom to early petal fall in Berrien County. Black knot and brown rot are the primary diseases of concern now during late bloom.

Apple bloom is open on all varieties in Berrien County with Zestar and Macintosh in full bloom and most other varieties at king bloom to first side bloom opening. Apple scab ascospore catch decreased from the peak of the previous week. Scatted showers this weekend did cause some light apple scab infection periods, but open blooms and highs in the 80s were good infection conditions for fire blight. There was a predicted fire blight bloom infection on Sunday, May 11, for apple orchards that had open bloom on Friday, May 9. Check the nearest Enviro-weather station to seek estimations of fire blight risk.

With the warm temperatures, insect activity increased greatly. No insecticides should be used during bloom, but growers should be scouting for insect pests that may need control after bloom. Scout for European red mites, aphids and leafroller pests such as obliquebanded leafrollers. Traps should be out for oriental fruit moth and codling moth. Spotted tentiform leafminer numbers are up.

Pears are in full bloom to early petal fall. Pear scab control is needed as susceptible green tissue emerges. Pear psylla can be found in all stages of development.

The impact of winter cold is easy to see with warmer weather and increased plant development. Southwest Michigan suffered cold temperatures between -10 and -20 F several times this winter. This is in the range that damages many small fruit. We have been looking for differences in growth between varieties that were able to withstand the cold and those that suffered damage. These differences become very noticeable as the past week’s warm weather brought on vigorous growth.

Grape buds have burst and shoot growth is underway. Winter injury is much more apparent as green shoot growth begins. Vinifera wine grapes show the effects of the harsh winter with very little growth from the buds. Hybrid grapes look much better and will have a good crop for some varieties. Damage to juice grapes generally does not look as bad as feared earlier as good buds pushed last week and now we see exposed leaves and shoots in many vineyards where we had feared more severe winter injury. When flower clusters are exposed, it will be easier to estimate crop and loss. 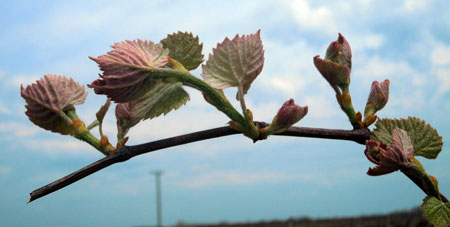 Southwest Michigan GDD summary for grapes from April 1-May 12, 2014

Rapid bud and shoot growth over the weekend moved grapes quickly past the window of injury from climbing cutworms and grape flea beetles. Grape berry moth adults were trapped this last week. It is too early to treat for grape berry moth. Treatment for this pest can begin after bloom when egglaying begins and insecticides are sometimes included in post-bloom sprays. Now that shoot growth has begun, sprays to reduce phomopsis and powdery mildew should be applied during early shoot growth.

Blueberry flower and leaf buds have burst across the region. Most varieties are at pink bud and bloom has begun in Bluetta and Weymouth, two early varieties. There is a lot of variation from very good growth to poor growth. A lot depends on the site. In a few sites, especially newer plantings with small bushes, dead and shriveled shoot tips show winter injury. The tops of these small bushes were exposed above the snow and would have seen very cold temperatures during frequent cold, calm nights. The lower portions of these bushes look fine. These symptoms are often seen in portions of a field, but not the entire planting. 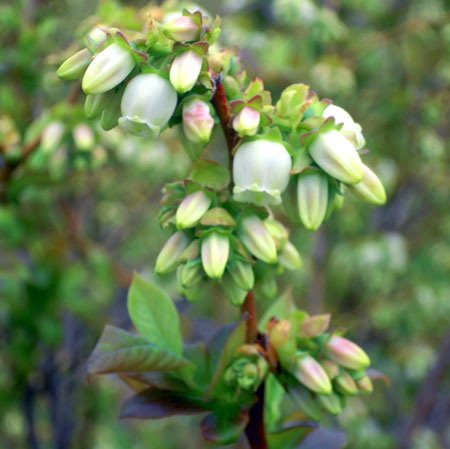 Leaves are unfolding in the warm weather and some fields show a lot of green with a lot more leaves than flower buds. Many of these fields had a heavy crop last year and have a light crop potential this year. With a heavy fruit load, blueberry fields that were not pruned in 2013 or received inadequate irrigation or fertilizer had poor flower bud formation in the fall. Other fields do not look as green and have a heavy set of flower buds and relatively few leaf buds. Fields with a light crop last year seem to be set up for a heavy bloom this spring. It will be a few more weeks before we can make accurate estimates of the 2014 crop, but right now things are much more encouraging than they seemed a month ago. Fruit set from pollination will be very important in the upcoming weeks during bloom (see “Invest in pollination for success with highbush blueberries”).

There is a chance of a frost late this week on Friday, May 16. We are near the end of the spring frost season and this frost is unlikely to be widespread or severe. At the pink bud stage, blueberry flowers should be able to withstand temperatures down to 25 F with little damage. Since this is about the lowest temperature overhead sprinkler irrigation systems can protect, growers are cautioned not to be too eager to run their systems. We generally recommend frost protection with sprinklers only at or just before bloom, under calm conditions of less than 5 mph winds. We currently have relatively long days, over 14 hours of daylight, and short nights, which leaves only a short time for radiation cooling during the night and our soils are at about 60 F now. Many smaller growers worked their row middles early in the season several weeks ago and the bare soils can also retain more heat during radiation freezes. Tilling the soil just before a freeze is counterproductive and loose soil retains less heat than a mowed sod (see “Moist, weed-free ground retains more heat”).

As leaf tissue emerges, mummy berry infections are possible. Mummy berry mushrooms were easier to find last week. Spores are generally released under dry conditions, but rain is required for infection and we have several infection periods last week (see “Understanding mummy berry shoot strikes”). Freezes increase the susceptibility of tissues to infection, so protectant materials should be applied before freezes while systemic materials should be applied quickly after a freeze.

Cranberry and cherry fruit worm adults were caught during the weekend warmth and three-lined flower beetles were reported in some areas. Cooler temperatures forecast for this week should slow down plant growth and insect development.

Strawberry flower trusses have emerged from the crown and bloom has begun in many fields. There is a chance of a light frost late this week on Friday, May 16. Strawberry flowers can be damaged by temperatures just below freezing, so irrigation systems should be set up to protect against freezes later this week.

Bramble winter injury is easy to see. New primocanes growth from the ground is vigorous. Leaves are unfolding on floricanes and lack of leaves and poor growth indicate widespread injury, especially to canes above the snowline. On canes with good growth, the flower clusters are emerging. Thornless blackberry canes were generally killed to the ground.

Our next weekly Monday fruit IPM meeting is May 19 at Fruit Acres Farms, 3452 Friday Rd., Coloma, MI at 5 p.m. Two Michigan restricted use pesticide (RUP) applicator recertification credits will be given for these meetings.