An early morning frost on May 13 caused limited damage to fruit in southwest Michigan.

Last week was warm with highs in the 70s. Low temperatures were in the 40s and 50s. The passage of two cold fronts over the weekend dropped temperatures below freezing on Monday, May 13, according to Enviro-weather. A widespread radiation freeze with lows in the upper 20s caused light damage across the region. Severe damage was reported in parts of eastern Van Buren County. It will take some time to assess the extent of the damage.

Scattered showers fell across the region last week on Thursday and Friday (May 9-10), bringing 0.25 to 0.5 inches of rain. This long wetting period was an infection period for many diseases. Soils are drying out. Warmer weather will return this week with highs in the 70s and lows in the 50s. Cooler weather is forecast to follow this warm-up next week. There is a chance of scattered rain in the forecast, but no widespread rain event is in the forecast. You can check your local weather station and conditions at Enviro-weather.

Southwest Michigan GDD summary from January 1 to May 12

Tree fruit in southwest Michigan are generally past full bloom. Low temperatures on the morning of May 13 damaged apples more than other tree fruit. Damage was most severe in sites where temperatures dropped below 28 F. (See the Michigan State University Extension article “Assessing frost and freeze damage to flowers and buds of fruit trees.”)

Rains beginning May 9 were favorable for many diseases including scab of apples and pears as well as brown rot of stone fruit. Insect activity is increasing. Oriental fruit moth male adults were caught last week in relatively high numbers (more than 50 per trap) in some sites. Because of the freeze on May 13, we will wait and see how the moth flight progresses before setting the regional biofix as May 9 or after the freeze. Pheromone disruption products, where used, should be deployed now to suppress mating of this insect.

Apricot fruit are at shuck split with a good crop potential. The largest fruit are about 10 mm in diameter.

Peaches are in the shuck. Crop potential is good, but it will be easier to tell when the fruit emerges from the shuck. Growers have stopped mechanical blossom thinning to avoid excessive damage to developing leaves and declining effectiveness because the fruit is difficult to dislodge once the petals drop and the fruit swells to fill the shuck.

Nectarines should be examined for signs of tiny western flower thrips crawling and flying about the developing fruit. Oriental fruit moth biofix was set for May 9, but may need to be reset due to the freeze. Control for oriental fruit moth is recommended at approximately 100 to 150 GDD base 45 F for products with ovicidal activity or 170 to 195 GDD (10 to 15 percent of egg hatch) for products (organophosphates, carbamates or pyrethroids) with direct contact insecticide effects against hatched larvae from the biofix date. Developing fruit become directly susceptible to bacterial spot and rusty spot (powdery mildew) once the fruit emerges from the shuck until approximately pit hardening.

Cherries. Little freeze damage was reported in cherries. Apparently the fact that the trees had good foliage and the fruit was in the shuck protected the fruit from the cold.
Sweet cherries did suffer a little freeze injury, but the extent of the damage will not be apparent until after the end of the post-bloom June drop. Sweet cherry fruit are at shuck split or out of the shuck. Exposed fruit is susceptible to plum curculio feeding damage. We expect that plum curculio egglaying will begin later this week when temperatures are in the 70s for several days.

Tart cherries are in the shuck. No freeze injury was reported in tart cherries. There was more damage to tart cherries in the bud from the April 20-21 low temperatures. Pollination conditions last week were excellent. Leaves have matured sufficiently to be susceptible to cherry leaf spot infections and the wetting period that began on May 9 was an infection period.

Plums are generally past petal fall and in the shuck. Black knot controls are needed until active shoot growth slows in early to mid-summer. Fruit emerging from the shuck is prone to direct damage by plum curculio and bacterial spot.

Apples range from full bloom to petal fall in Berrien County, with Van Buren County apples slightly behind at full bloom. King bloom in Van Buren County was last May 8. Light damage in the low sites or in the low areas in orchards has been reported across the region. Temperatures and rain last week were sufficient for a fire blight (Erwinia amylovora) infection as predicted by the Maryblyt model on Enviro-weather. Although the temperature dropped on the following day, the fire blight bacteria washed by rain into the base of the flower penetrates quickly (the day of infection). Here the bacteria survive and multiply when warm temperatures return.

Under cool conditions, an infection can take 10 or more dates to show symptoms. Fire blight levels will build rapidly this week with the warm temperatures and we will be at risk for blossom blight later this week. Apogee, which reduces the spread of fire blight after infection, needs to be applied at king bloom petal fall, right on the heels of full bloom.

Overwintering obliquebanded leafroller larvae should be active on shoot tips and flower clusters and then move throughout the tree. Apple flea beetle adults were detected shortly before bloom in a Berrien County organic apple block where they caused shot hole feeding damage to leaves. Newly planted trees on this farm were in danger of being stunted by relatively severe damage to the newly emerged leaves.

Pears are at petal fall. Damage from the freeze has not been assessed, but an accurate assessment can be made in the next few weeks after the June drop. Pears were also subjected to a fire blight infection on May 9. Growers should consider the need for Apogee treatment to suppress shoot growth and reduce fireblight susceptibility. Growers should continue to protect against pear scab and scout for pear psylla activity.

In grapes, it is too early to assess the full extent of injury to vineyards from Monday morning’s freeze. There was significant damage in a few sites, but most sites suffered only light damage. Damage was most significant at sites further away from Lake Michigan. Damage was significant in eastern Van Buren County around Lawton, Paw Paw and Mattawan, Mich., with severe injury in low lying areas, but many higher sites had minimal damage. In Berrien County, there were pockets of freeze damage in vineyards, but damage was spotty in most other locations. 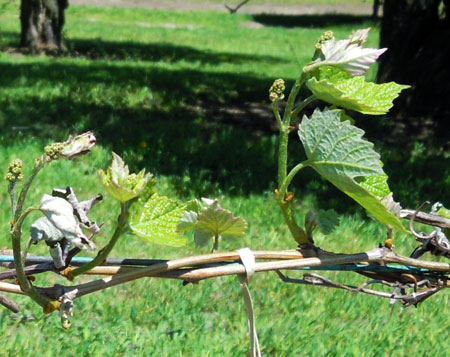 The shoot on the left was damaged by freezing temperatures
on Monday morning. Photo credit: Mark Longstroth, MSU Extension

‘Concord’ and ‘Niagara’ are at 4- to 6-inch shoots. We have passed the point where grape flea beetle and climbing cutworm should be a problem on primary shoots. The first grape berry moth adults of the season were trapped in Van Buren County near Lawton, Mich., late last week. The first generation of grape berry moth overwinters as pupae in leaf litter around vineyards and emerge before bloom.

Now that shoots are actively growing and flower clusters are visible, growers should be on the alert for phomopsis. This disease can be troublesome during periods of cold, rainy weather. Temperatures in the 59 to 68F range need at least six hours of wetness for infection to occur. Consult the Michigan Fruit Management Guide (E154) for recommended fungicides. Powdery mildew control may be needed now for problem areas or highly susceptible varieties.

Blueberries are at pink bud and early bloom. Bloom looks to be very heavy and it seems there was little damage to blueberries from Monday’s freeze. 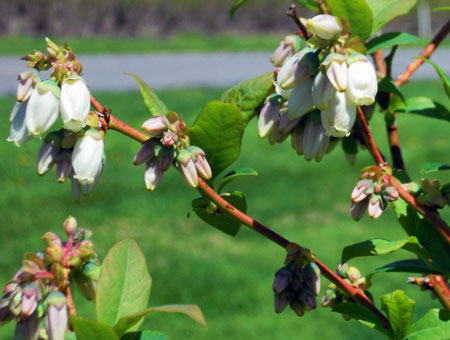 The rain last week was a mummyberry infection period for shoot strike. Mummy berry shoot strike symptoms were reported in the Covert, Mich., area. With bloom opening, growers should protect against mummy berry bloom infections. Fungicides to protect against mummy berry blossom infections need to be applied soon after the flowers open to protect the stigma from infection. Mummy berry sprays are often applied at 10 to 20 percent bloom and again at full bloom. Late bloom sprays should focus more on protecting green fruit using fungicides with a different mode of action (FRAC code).

Cherry fruitworm should be flying, but growers need to avoid using insecticides during bloom. MSU Extension recommends growers avoid all sprays of blooming blueberry fields during the day when bees are foraging. Try to apply pesticide sprays (even bee-safe materials) early in the day so bees are not actually sprayed.

Strawberry bloom began last week. Most strawberry growers used their sprinkler systems to protect against freeze injury on Monday morning and little damage has been reported from this freeze. We will be watching for strawberry bud weevil (clipper) and tarnished plant bugs as flower buds emerge. Everbearing strawberries in the high tunnels are growing well and more varieties have open flowers than last week.

Bramble shoots are expanding and flower buds can now be seen on some cultivars. Orange rust symptoms are becoming visible in infected shoots. This disease is systemic and infected plants should be removed. Fungicides recommended in the Michigan Fruit Management Guide (E154) will only prevent new infections.

The next Monday fruit IPM meetings is on May 20 at Fruit Acres Farms at 5 p.m. There is no meeting on May 27 (Memorial Day). These weekly meetings are good for one RUP credit and will continue through the end of June.