A cool, wet week during bloom has growers applying protectant sprays between rains.

Last week started warm and wet on Monday, April 25. High temperatures were in the low 80s for early week and fell into the low 50s from mid-week to the weekend. Low temperatures were in the low 40s. There were scattered rains last week and soils are wet. The weekend was wet and thunderstorms moved through Sunday night. Rainfall last week was about 1.2 to 1.5 inches of rain. There were several infection periods for fruit diseases during the week. Low temperatures on Tuesday, May 3, dropped to near freezing in low areas and may have caused some damage to unprotected crops. Rainfall totals for April averaged 3.5 inches for the region. Plants have leafed out relatively rapidly despite the cool temperatures due to the warm, moist soils and warmer night temperatures.

Temperatures dropped near freezing Tuesday morning, May 3; with the exception of strawberries, no fruit crops should have been damaged. No freezes are in the forecast and there is only a slight chance of damaging freezes in May. Growing degree-day (GDD) heat accumulations last week were low. We are still about a week ahead of normal for heat accumulation. Continued cooler weather this week will slow down plant development.

Stone fruit bloom is ending. Apple bloom is underway. Rains last week were probably too cool for brown rot. Insect activity was low last week because of the cool temperatures. Green fruitworm moths have been flying for three weeks. Larvae from this insect are the first to target fruit after petal fall. Oriental fruit moth are flying. Michigan State University Extension suggests growers scout for Eastern tent caterpillar webs and remove them. There were several extended wetting periods during the week which were heavy infection periods for foliar diseases. The most significant wetting period began Saturday, April 30. This wetting period was a moderate infection period for bacterial spot, cherry leaf spot and a significant infection period for apple scab.

Apricots are in the shuck and early shuck split. 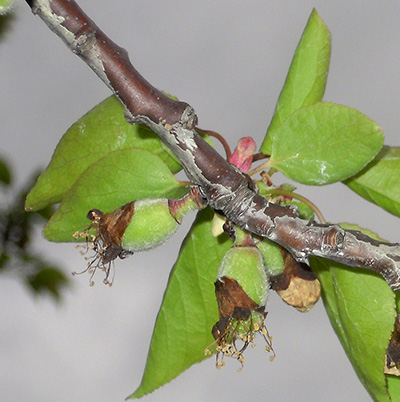 Apricots are at shuck split.

Peaches are in the shuck. Biofix first flight of oriental fruit moth was set Monday, April 25, based on trap catches at the Trevor Nichols Station trap line. Biofix is used for timing sprays against the larvae which can cause flagging damage on branch tips of young peach trees. Pheromones for mating disruption should be out. The rains favor bacterial spot infection of young leaves. 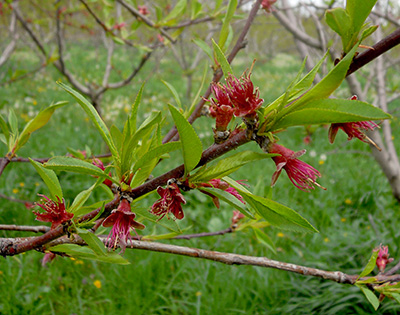 Bloom has ended and these peaches are in the shuck.

Tart cherries are at petal fall. Leaves emerged rapidly last week and growers have been applying protectant fungicides to protect the leaves. The long wetting period beginning April 30 was an infection period for cherry leaf spot in many locations. Many southwestern tart cherry orchards lost their leaves early last year because of the wet June and these weakened trees are blooming later than trees that held onto their leaves most of the season.

Japanese plums are in shuck to early shuck split.

European plums are at petal fall to in the shuck. Plums need to be protected against black knot from first bloom until second cover.

Apple scab ascospores numbers are declining from peak numbers in the last two weeks. Several scab infection periods were recorded in the region. No leaf scab symptoms have been found. Symptoms from more recent infection periods should become visible after Mother’s Day, May 8. Spotted tentiform leafminer have been flying for about two weeks. Redbanded leafroller trap catch is high. 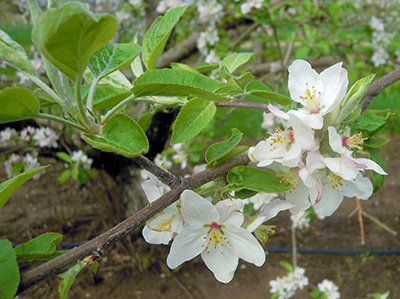 Pear bloom is ending. Most of the petals have fallen. Pear psylla adults are flying. Pears also need to be protected against pear scab and fire blight.

Juice grape buds are at 1-3 inch shoot growth. In warmer areas, several leaves have folded back, exposing the flower clusters. Hybrid wine grapes vary, but the most advanced have leaves unfolding. Vinifera grapes are at bud burst. As the buds open and shoot growth begins, shoot tissue becomes vulnerable to infection from powdery mildew and phomopsis. Fungicides to control these diseases are usually applied as flower clusters become visible. Last week’s wet, rainy conditions were good for phomopsis infection.

Grape flea beetles and climbing cutworms will be feeding in vineyards where they are present. Where problems with these pests have appeared in the past, scout weekly from now until 3 inches of growth. Grape berry moth flight has begun, but first generation egglaying is about a month away.

Blueberries are at pink bud and bloom has begun in many fields. The bud set looks very heavy in some areas. Leaves are unfolding and shoots are growing rapidly. Water is standing in many fields. Growers applied sprays to reduce mummy berry shoot blight. During bloom, the site of control for preventing mummy berry infection shifts the flowers. Bees and other pollinators carry mummy berry spores from shoot strikes to open bloom. Good pollination conditions are good mummy berry infection conditions if there are shoot strikes in the area. The flowers are susceptible to infection as they open and susceptibility declines as the flowers age. Sprays are timed for early bloom and mid-bloom.

At petal fall, anthracnose becomes a concern and the preferred fungicide changes to include action against anthracnose, mummy berry and phomopsis. Growers should avoid spraying in the middle of the day when bees are foraging the bloom. Cherry fruitworm and cranberry fruit worm should emerge soon with warmer weather. See “Time to prepare for fruitworm management in blueberries” for more information. 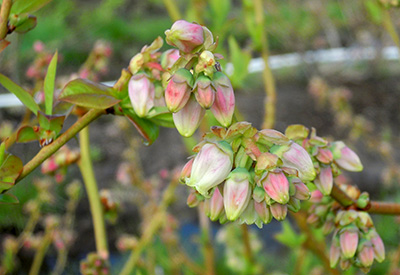 Strawberry leaves are still emerging from the crown as well as the flower trusses. Once the flower buds emerge, they can be killed by cold temperatures in the low to mid-20s. At this time, leaf diseases are the primary concern in strawberries. Common strawberry leaf spot is the chief concern. If the weather is wetter than predicted, annular leaf spot could be a problem. Growers have put out straw and some have ran sprinklers to prevent frost-damage to the exposed flower buds.

Bramble growth continues. Leaves are unfolding in raspberries and the flower clusters can be seen. The main concern is orange rust in blackberries and black raspberries. Effective controls can be found in the 2016 Michigan Fruit Management Guide (E0154).

Cranberries are just starting to green up and bud swell can be seen in the warmer fields.

Our next Monday fruit IPM meeting in southwest Michigan is May 9 at Fruit Acres Farms, 2559 Friday Road on the northeast corner of Friday and Carmody Roads, south of Coloma, at 5 p.m. Two Michigan pesticide applicator recertification credits will be given for these meetings.