Stone fruit bloom has begun. Cooler weather should slow plants down with frost risk towards the weekend.

Warm temperatures last week with highs into the 70s, doubled the growing degree days and accelerated plant growth. There was a rapid leaf-out last week as plant growth moved quickly especially on the weekend. Rain Sunday (April 19, 2015) brought cooler weather. This week high temperatures are forecast in the 50s with lows near freezing. The rains on Sunday were an infection event for some early season diseases. Windy and rainy conditions for the beginning of the week will give way to calmer conditions. Drying out at the end of the week, leaves a chance of radiation freezes on Friday and Saturday mornings if we have clear calm conditions. Here are the current degree day totals for Southwest Michigan.

Bloom has begun in stone fruit. Open flowers can be damaged by temperatures below 29 degrees Farenheit. Rains during bloom can be a problem in stone fruit. Cold rains or freezes are conducive to bacterial canker. Warm rains during bloom will be conducive for brown rot in stone fruit. As leaf tissue becomes available, Michigan State University Extension notes warm wet conditions are also conducive to bacterial spot, a disease of peaches and plums. Fruit development continues to be spread out across the region with southern orchards more advanced than sites to the north. See Freeze damage depends on tree fruit stage of development for more information about the susceptibility of specific flower stages to below freezing temperatures.

Apricot bloom began on April 16 and with the warm temperatures, full bloom was on the 17. We are seeing poor scattered bloom in many sites. Some trees lack flowers in the bottom of the tree. More tender varieties are showing few viable flower buds but crop potential is generally decent so far.

Peaches are at green calyx to first pink. Winter damaged fruit buds dropping from the trees make it easier to determine the crop potential. Like last year we are seeing some branch ends that will shrivel and die. Some low-lying orchards have few or no viable fruit buds. Damage away from Lake Michigan is more severe than in traditional growing areas on elevated sites close to Lake Michigan.

In apples, early blooming varieties such as Zestar are at first pink in Berrien County, but most varieties are at tight cluster (squirrel ears). At least two apple scab infection periods have been reported for the region. We have left the window for copper applications for scab control and fireblight management. We have had numerous reports of abundant sooty growth on trunks and scaffold limbs, sometimes associated with large pruning cuts. This is apparently non-pathogenic fungi growing on gum and ooze that came from winter-damaged trees and poorly healed pruning cuts. 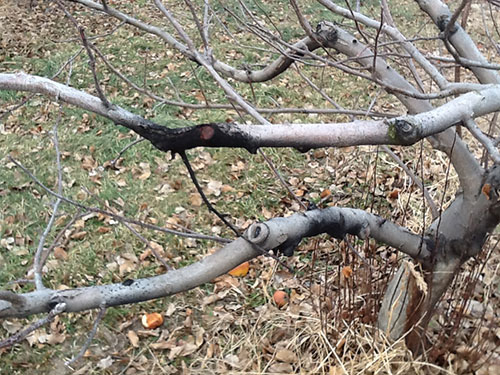 Pears are at tight cluster. Pear psylla are flying.

Grape growth has begun; most areas and varieties are in bud swell; very few vines are at bud burst. Winter injury to grapes varies between varieties and different vineyard sites. Vinifera grapevines sustained more damage than hybrid vines on similar sites, with juice grapes and super-hardy hybrids having the least cold damage. There is cold damage to both buds on the cordon and to the trunk cambium.

Growers should examine the trunks of vines under the bark, since damage to the cambium just above the snow line has been found in many vineyards. Heavy cambium damage may cause vine collapse during the summer. As vines begin bud swell, it is time to scout for damage from grape flea beetle and climbing cutworm. At late bud swell and bud burst, grapes can be severely damaged by temperatures below 30 F. Once the buds burst and shoot growth begins, growers will need to focus on early season disease control. 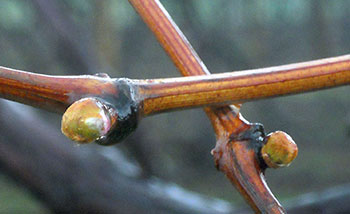 Blueberry flower buds are swollen and beginning to burst. At this bud stage the plants can withstand cold temperatures down to about 20 F. Leaf buds are showing green. Many growers report less injury than last winter. As the plants green up winter injury becomes easier to assess. Green leaf tissue is susceptible to mummyberry shoot infections. Warm wet weather should have brought out mummyberry trumpets and growers should scout their fields to assess their risk. See Scouting and management of mummy berry in blueberries.

Bramble buds have burst and leaves are unfolding. Primocane shoots are beginning to emerge from the soil. Once the buds have opened it is too late for lime sulfur to be applied. Most flower buds are not exposed and plants can withstand temperatures into the mid to lower 20s with little damage.