A wet week is ahead as plants move slowly in spring. Disease and weed control measures are delayed by saturated soils.

Tree development in southwest Michigan is about normal by the calendar. Bud movement since early March has been slow. Buds are swollen and beginning to open, exposing green tissue. Last week was cool with high temperatures bouncing between the low 40s and high 50s. Lows were generally near freezing. These cold low temperatures kept plants from moving very quickly as plant development stopped every night and only moved during the days with warmer temperatures above 50.

Heavy rain fell across the region Thursday, March 30. The ground is saturated and water is standing in many low areas. Growers are struggling to reapply protectant fungicides when equipment is easily stuck in the mud. The weather for this week should be cool and wet. Rain is likely this week through Thursday, April 6, with a drier, warmer weekend. Wet weather will return next week.

Most fruit crops are still in the swollen bud or bud burst stage. It would require cold temperatures into the low 20s to damage the tree fruit flower buds. See “Freeze damage depends on tree fruit stage of development” by Michigan State University Extension for more information.

Reports of significant damage to fruit crops in the southeastern U.S. has given special importance to maintaining the Michigan crop this year because of the prospects for higher prices. Low temperatures the morning of March 14 caused some damage, but growth has been so slow that good estimates require cutting or forcing buds. Only initial estimates have been made and damage seems light and spotty. Growers have been applying oil sprays for control of San Jose scale and mites.

Apricot flowers are at first white for some varieties. Normal apricot bloom in southwest Michigan is about April 15, but with a little bit of warm weather we should see bloom open before that. There was significant damage to apricot flower buds by low temperatures March 14, especially away from Lake Michigan.

Peach and nectarine flower buds are at red calyx. Some showy bloom varieties such as Loring and Fantasia are close to first pink. Some peach varieties and sites had some flower bud damage from the March 14 freeze event. Assessments will be easier as flower buds expand.

Sweet cherry buds are at green tip and there is some damage from the March 14 freeze with lows into the low teens and single digits. Tart cherry buds are at side green and less affected than sweet cherries by low temperatures two weeks ago. Crop potential for most sites looks good. 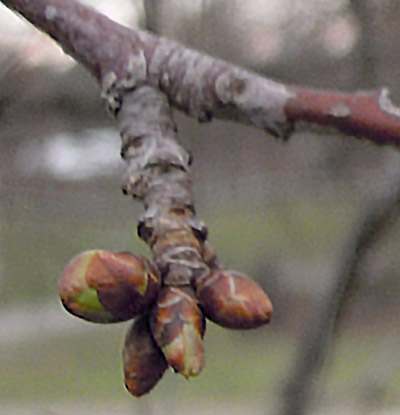 Sweet cherry buds are moving into green tip stage as the ends of the buds swell.

Plum fruit buds of early developing varieties such as Shiro are at bud burst to green clusters, well ahead of European plums. Damage from the March 14 low temperatures seems minor. A more effective examination is waiting for bud growth to resume. Soon black knot will begin to spread. Existing black knots release spores and infect young green tissue. Thoroughly pruning out black knot and disposing the knots by burning should be done before growth begins, reducing the risk to new green tissue.

Apples, for the most part, were unaffected by the March 14 low temperatures. Early developing varieties such as Zestar and McIntosh are at half-inch green to early tight cluster, and other varieties range from 0.25- to 0.5-inch green. Golden Delicious is at green tip and Red Delicious at silver tip, depending on the site.

We have had three significant scab infection periods over the last two weeks. Scab ascospores were detected in low numbers during these rain events. This heavy rain on saturated ground makes it difficult to reapply fungicides. Now is the best time to score above lateral buds (cut into wood with a double hacksaw blade) and spray cuts with Maxcel in order to stimulate shoot growth on central leaders.

Pear fruit buds are at early bud swell, depending on the site and variety. Pear psylla adults should be flying.

Grapes have not yet begun growth. There was some concern during February, but the temperatures in March have been too cold to stimulate growth.

Blueberry flower buds are swollen. In early varieties, the buds are beginning to burst. Leaf buds are just beginning to swell on the uppermost leaf buds of the shoot. Soon green tissue will emerge, making them susceptible to mummy berry shoot strikes. Growers should be scouting for mummy berry trumpets in areas where mummy berry has been a problem. Many growers have applied Sulforix and other lime sulfur products to suppress early-season diseases.

As flower buds open in these wet conditions, they are susceptible to phomopsis infection, which can lead to phomopsis shoot blight. Most fungicides for mummy berry shoot strike should also be effective on phomopsis. When the rains and flooding in blueberry fields subside, it will be time to apply spring herbicide treatments to reduce weeds in the bush rows. 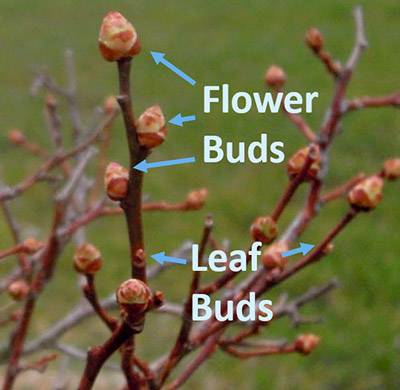 Blueberry flower and leaf buds are swollen and beginning to open.

Strawberry leaves are emerging from the crown. Over-wintering mulches should be removed and raked between the rows. Growers are looking at early-season herbicides to control overwintering weeds. 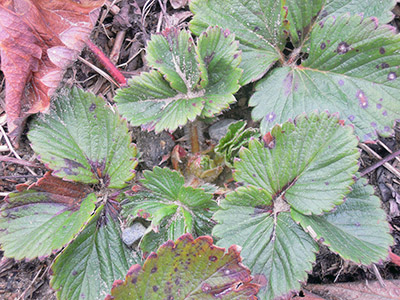 Strawberry leaves are emerging from the crown.