Blueberry and sweet cherry harvest is underway. Spotted wing Drosophila numbers are up and birds are a problem.

The first week of summer was cool with highs falling into the low 70s. Lows fell into the 50s. Rainfall continued to be light and spotty. Scattered storms crossed the region and rainfall were quite variable and ranged from 0.2 inch to over 3 inches of rain. Most areas received less than 0.5 inch of rain. More rain fell in the north, which received excess rain and water is standing in some fields.

In the south, sandy soils are very dry. The cool temperatures kept the potential evapotranspiration less than 0.20 inch of water a day. This low transpiration will continue this week with highs in the 70s and 80s and lows near 60.

Rainfall this season has been short in the south with about 7 inches of total rain for the season. Seven inches is about half the total water needs of our plants. Growers with irrigation need to maintain their soil moisture.

There is a good chance of showers and thunderstorms this week, so rainfall will again be spotty. This week will be warmer with highs rising into the 80s. Last week was cool and we accumulated 25 growing degree-days (GDD) base 42 every day and 17 base 50. Despite the cool weather, we continue to track about a week ahead of normal for heat accumulation for this date.

The recent cool weather and light rains have helped trees take up fertilizer, but sandy sites are generally still low on water. Spotted wing Drosophila numbers are up in some areas, especially where there are ripe wild berries. This fruit fly can be a serious pest in cherries and other stone fruit.

Rose chafer are scarce. Japanese beetles continue to appear in more locations. San Jose scale crawlers are out. Brown marmorated stink bugs have been less conspicuous around buildings over the past week, and are presumably seeking out food sources and laying eggs. Damage to crops is still very low. Growers can review the insect trap catch at the Trevor Nichols Research Center.

Peaches and nectarines are noticeably light in lower ends of orchards. Hand-thinning is finished in most orchards. According to the Michigan State University Enviroweather peach maturity model, the estimated start of Redhaven peach harvest in central Berrien County is July 30, and Aug. 4 for Allegan County. Early ripening varieties are starting to develop red blush, with harvest of very earliest varieties predicted to start the first week of July in central Berrien County.

Oriental fruit moth catch continues to be generally low. Now is the time of the second oriental fruit moth flight. Trap catch was up in some orchards and egg hatch for the second-generation began on June 25, about 1,125 GDD45 after the first moth catch of the overwintering generation. Protection from tarnished plant bug damage to the fruit is still needed.

Rusty spot and peach scab susceptibility is low now that fruit have past pit hardening. Bacterial spot symptoms on peach fruit and leaves are still relative light in the area. Susceptibility to this disease decreases past pit hardening. There have been instances of copper injury in peaches, where copper sprays on tart cherries have drifted into adjacent peach orchards.

Sweet cherry harvest is in its second week for Berrien County. Bird feeding is increasing, but does not seem as bad as usual.

Montmorency tart cherries are red, and growers have been applying ethrel to hasten crop maturity and harvest. Harvest should begin this coming weekend.

Leaf drop due to cherry leaf spot is becoming obvious in some orchards. There are many ripe berries such as Bush Honeysuckle (Lonicera) in the woods. This fruit is an early host of spotted wing Drosophila, and numbers are beginning to rise. Cherry growers need to be aware of this pest, which can quickly explode to damaging numbers. The maturity of the crop varies a lot in the orchards and on the trees. There is ripe fruit on the trees now.

MSU Extension recommends a tight insecticide schedule of weekly sprays to protect cherries. Insecticides need to be reapplied after any significant rain. Pay close attention to the pre-harvest intervals and your harvest schedule. Ripe fruit is on the trees and harvest for many growers is over a week away.

Growers who fail to protect their fruit may be in for an unpleasant surprise. Many berry growers have discovered that spotted wing Drosophila was a problem on their farms only when they went to harvest their crop.

Warm rains near harvest are infection periods for brown rot, which is common in neglected cherries this year.

Plums continue to size rapidly. The area plum crop ranges from poor to fair, depending on the site. Brown rot sporulation is showing up on unprotected green fruit. Maintain protection against black knot until rapid shoot growth stops. Some bacterial spot symptoms have started showing up on fruit. Spotted wing Drosophila has been a problem on soft plum fruit in previous years. 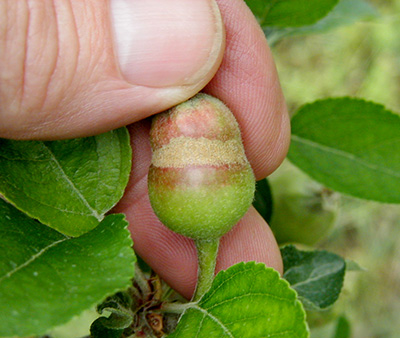 Frost rings on the fruit are common in some orchard blocks.

There is relatively little fire blight this year. The regional codling moth biofix for southwest Michigan was May 16, and the codling moth model predicted egg hatch began on June 4 in Berrien County. We should see fruit entries soon.

Biofix for obliquebanded leafroller based on Trevor Nichols Reach Center traps was June 5 and trap catch numbers are increasing across the southwest region. Codling moth egg hatch begins 400-450 GDD (base 42) after biofix. This was approximately June 19 for central Berrien County. Growers can use the Enviroweather obliquebanded leafroller model to fine-tune their spray timing.

Pear (Bartlett and Harrow sweet) fruit are almost an inch in diameter. Fungicide treatment for pear scab can stop in orchards with no leaf symptoms. Pear psylla levels seem low. European pear rust lesions can be found on ornamental ‘Bradford’ pears and in commercial pear orchards. This disease cycles back and forth between pear and juniper.

Grapes are out of bloom and berries are sizing rapidly. In some areas, Concord and Niagara are nearing berry touch. Downy mildew and powdery mildew incidence is low. Rachises and rapidly expanding fruit are vulnerable to infections of black rot, downy mildew, powdery mildew and phomopsis. Protect against all of these diseases now with multiple modes of action in good rotation.

Rose chafers are feeding, but after fruit set, present a low risk of damage. Grape leafhopper and potato leafhopper numbers are increasing in some vineyards. Expected dates for the beginning of grape berry moth egg laying are July 2 for Berrien County and July 3 for Van Buren County. Begin applying ingestion poisons on that date, or contact poisons three to five days later.

Blueberry harvest has begun with early varieties such as Bluetta and Duke. The season is about a week early. Birds are a problem for smaller growers. Most growers need to irrigate to maintain soil moisture.

The focus of disease control should be on anthracnose, especially if growers are irrigating heavily. Growers can use the Enviroweather anthracnose fruit rot prediction model to assess their risk of infection. Bush honeysuckle are ripening in the woods. This plant is one of the first wild host fruits for spotted wing Drosophila. 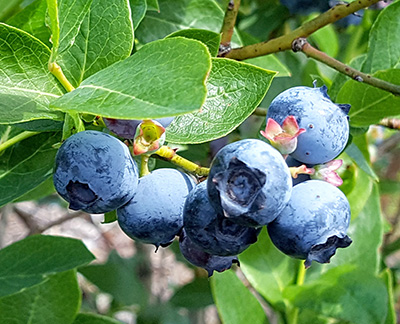 Blueberries are quickly turning blue. Widespread harvest in blueberries should start early next week with large volumes of blueberries.

Strawberry harvest is ending. Some growers are still harvesting late varieties. Most will close this week. Other growers have begun renovation. During renovation, selective herbicides and mowing are used; the rows are narrowed using herbicides or traditional rototilling. Then, residual herbicides are applied to control weeds. The field should be fertilized and then irrigated. The goal is to develop a healthy stand and maximize fruit set for next year.

Protect renovated plantings from potato leafhoppers, which will stunt plant growth. Bloom in day-neutral strawberries has stopped as the warmer days promote leaf growth and runnering.

Bramble fruit are growing. We are seeing color in early summer red raspberries and early harvest has begun. Protect against spotted wing Drosophila.

There will be a pre-harvest blueberry meeting Thursday, July 29, at the Trevor Nichols Research Center in Fennville, Michigan, from 5 to 7 or 8 p.m. Two RUP credits have been applied for this meeting.

The 28th Annual Viticulture Field Day and Steak Cookout is Wednesday, July 26 at the Southwest Michigan Research and Extension Center. This well-attended educational event is hosted by the Michigan Grape Society and Michigan State University Extension. Register before July 14.