There’s a risk of frost damage over the coming week. Low rates of flea beetle feeding have been detected, and phomopsis and powdery mildew protection is needed in susceptible varieties.

We are currently about a week ahead of 2016 in heat accumulation and vine development, but the next five days are predicted to be cool. Low temperatures could reach 32 or 33 degrees Fahrenheit in our area Sunday and Monday, May 7-8. There is a risk of shoot damage occurring during this cold period. Vineyards with frost protection measures should prepare to employ them.

Concord and Niagara buds have broken and they have 1- to 5-inch shoots, with clusters becoming visible in some location. Early-breaking varieties such as Marquette have also put on several inches of shoot growth. Later hybrids and vinifera range from bud swell to 1-inch shoot growth.

Current development stages of grapevines at the Southwest Michigan Research and Extension Center: (left to right) Concord, Marquette and Riesling. Protect Concord and Marquette from phomopsis as the new leaves unfold from the clusters as shown. All three varieties are currently susceptible to frost damage. Image courtesy of Brad Baughman, MSU Extension.

Rains over the weekend and Monday, May 1, were an infection period for phomopsis. Cool and shady conditions were also conditions for powdery mildew infection. Juice grape and hybrids should get an application EBDCs to protect from phomopsis and early black rot ahead of the next predicted rains. 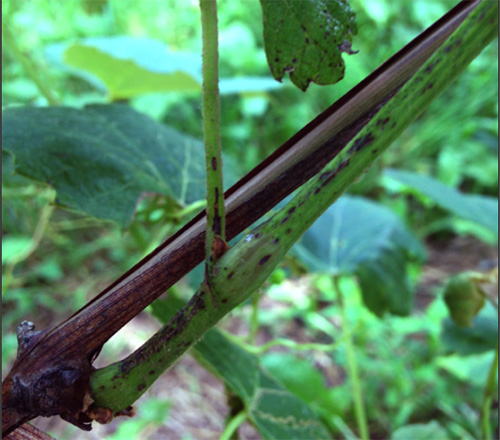 Phomopsis shoot base lesions in summer; these lesions form now on unsprayed vines, become visible in four to six weeks and are responsible for next year’s phomopsis infection spores in spur-pruned vineyards. Image courtesy of Brad Baughman, MSU Extension.

Brown marmorated stink bug adults were found at a vineyard in Lawton, Michigan. Flea beetle or cutworm damage was not found in Van Buren County, but less than 1 percent of shoots/buds were damaged in Berrien County. In varieties that have less than 2 inches of shoot growth, more than 2-5 percent of shoot or bud damage is the treatment threshold. Concord and Niagara have grown out of the stage where they can be injured by bud feeders. 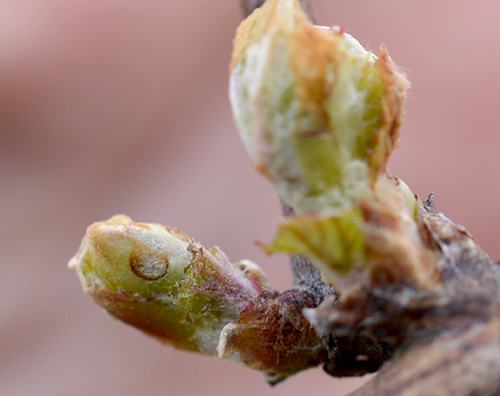 Example of feeding damage from grape flea beetle. Note the small hole in the side of the unfolding leaf tissue. Image courtesy of Keith Mason, MSU.

Thank you for reading the first vineyard scouting report of the season! We like being out in your vineyards to watch what's happening with the vines, and we wish everyone the best in bringing a high-quality crop to bear. We hope you find the information in our report useful, and we encourage all grape growers in the state or region to call or email us. We welcome feedback or ask questions at any time. You can contact Brad Baughman at baughm30@msu.edu or 269-927-5674, ext. 4012, or Keith Mason at masonk@msu.edu or 517-353-1397.