Soybean aphid populations remain relatively high in some fields in the Thumb, with much lower levels in the rest of Michigan.

The fact that this mini-outbreak in Michigan’s Thumb is isolated is even more clear based on soybean aphid counts in the Midwest suction trap network. The network has 32 30-foot tall pipes sucking in flying aphids in Illinois, Indiana, Iowa, Minnesota, Michigan, Kansas and Wisconsin. The first soybean aphids trapped in the network were caught June 21, 2013, at the MSU farm near Frankenmuth, Mich. Since then, the MSU trap caught 20 soybean aphids the week of July 5, and 131 the week of July 12. The only other soybean aphid detections on the entire network have been in Wisconsin, most (n=50) in traps in Seymour and Hancock at a similar latitude to Frankenmuth.

While the winged soybean aphids produced in fields in the Thumb likely are blowing into Ontario, Wisconsin fields could be sending aphids into Michigan. Populations generally remain under threshold in the west and central parts of the state, but fields bear watching for the next few weeks. For those of you managing vegetable crops, remember that winged soybean aphids can transmit plant viruses like watermelon, cuke and bean common mosaics, zucchini yellows and PVY.

As far as the number of aphids in fields, seed treatments delayed colonization, but not by much – maybe by a week in side-by-side fields. Coverage continues to be an issue. When using a pyrethroid, it is important to optimize coverage, especially in fields that are R2 and older. This is because aphid populations “follow” nitrogen as plants form pods, moving lower in the canopy, even to the bottom leaves.

On July 11 at the MSU farm, strips in a field averaging 305 soybean aphids per plant were sprayed with glyphosate + a pyrethroid. The sprayer was set up for the glyphosate application, not for optimum penetration of the canopy. A week later, the unsprayed strips had doubled to 690 soybean aphids per plant, but the sprayed plants still averaged 270 soybean aphids per plant. The majority of aphids in the sprayed strips were in the lower third of the canopy where insecticide did not penetrate. Fortunately, these aphids are relegated to feeding on poor quality leaves with less nutrition. Instead of being fat, juicy and green, these aphids are tiny, white and wimpy – entomologists call these “white dwarves” (see picture below). I do not believe they are robbing yield, and even if they were, it would be difficult to kill them at this point.

Note that there is a huge number of beneficial insects in infested fields putting a dent in the aphid population. One thing that is new is an unprecedented number of parasitoids, at least two species of wasp parasitizing and killing aphids. Below are several close-up pictures so you see what these look like.

Coverage is key. The leaves to the right are from plants sprayed at 30 psi with glyphosate + Asana. The nozzle set-up was for the glyphosate application, not for penetrating the canopy. The trifoliate from the TOP of the plant is clean. A trifoliate from the BOTTOM of the plant still has many tiny aphids, about 40 in the close-up. The good news is these wimpy, small aphids (so-called white dwarves) were feeding on the lowest leaves practically in the dirt, a poor food source. This feeding doesn’t impact the plant very much. 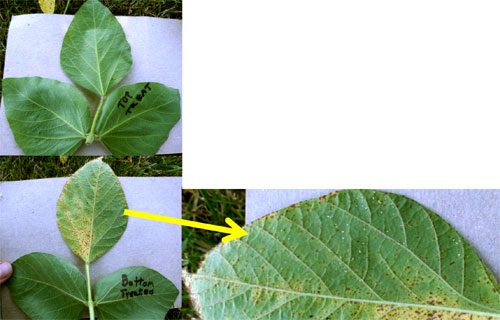 One positive is the huge number of beneficial insects attacking the aphids, including an unprecedented number of parasitoids. A mummy is a crusty carcass of a parasitized aphid. If the shell is intact, the wasp is still developing inside. If there is a hole (like an open pop can), an adult wasp already chewed its way out.

The mummy shell may protect the developing parasitoid from an insecticide spray, but once it emerges, the adult wasp will die if it contacts pyrethroid residue.