Looking for a safe topic for conversation? Bring up potholes. A common Michigander gripe is the poor condition of the state’s roads. Fortuitously, a budget surplus in the state’s general fund has given the legislature a chance to appropriate $100 million for winter road repair, and $115 million for priority road projects, a total of $215 million.

But this spending bill (Senate Bill 608) will not address the structural problem with funding the state’s transportation infrastructure.

This is because construction and maintenance to Michigan roads and bridges are primarily funded by a gasoline tax (currently $.19/gallon, $.15/gallon for diesel) and annual vehicle registration fees. According to Michigan State University Extension, both sources of revenue have been insufficient to finance the structural improvements needed on Michigan roads. As cars have become more fuel-efficient and motorists drive less, the revenue generated from gasoline purchases has declined. And when the economy is weak, consumers spend less on purchasing vehicles, meaning less revenue from vehicle registrations.

According to the Michigan Department of Transportation, total revenue generated from the state gas tax has declined $100 million dollars from 2001 to 2011, while the cost of labor and materials to fix the roads has only increased.

A long-term solution to transportation funding has long eluded state government. Some advocate for increasing the state gas tax rate, which has not been raised since 1997. While $.19/gallon is one of the lowest state gas rates in the Midwest, Michigan is one of a handful of states that also charges a 6 percent sales tax on top of the state gas tax. A federal excise tax of $.18/gallon is also levied. See the chart below for a breakdown of where $4 goes at the pump. 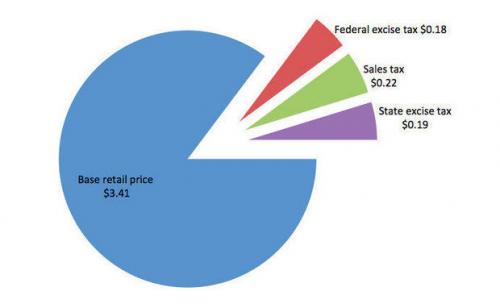 Photo: Taxes on a $4 gallon of gas. Photo credit: M-live.

The Tax Foundation, a nonprofit, non-partisan think tank, ranks Michigan’s gas tax burden as the 5th highest in the nation, once the 6 percent sales tax on gas is factored in.

Funding roads through gas taxes and vehicle registration fees is known as a “user fee,” because the tax is imposed by the government and the revenue is dedicated to that good or service. Economists tend to favor user fees because they reduce “free riders”—people who use a public good for free. However, the current funding system is an imperfect user fee, as two motorists who travel the same roads end up paying different amounts, depending on the cost and fuel efficiency of their vehicles.

Some argue Michigan should implement toll roads, a different way of imposing a user fee. Governor Snyder, in his special message on transportation delivered in 2011, argued that the opportunity for this has passed. Others point out that Michigan could not collect enough from out-of-state travelers, because the state is a peninsula and not located on a major east-west or north-south route.

Other states and countries are experimenting with a user fee system that charges motorists by the mile, not by the gallon. Policy analysts at the Rand Institute and elsewhere propose a mileage fee, because revenue could be more fairly distributed based on use of roads. Additionally, if cars are outfitted with an electronic chip that automatically charges motorists more during peak hours, the system could reduce congestion. And, if fees could be increased for vehicles that emit more pollutants, emissions could be reduced. The system has been piloted in in Oregon, Minnesota, and New York City.

At any rate, the $215 million appropriated this week is but a drop in the bucket. A 2011 Michigan House of Representatives Workgroup estimated that $1.4 billion additional money was needed annually between 2012-2015 to fix the existing roads.