The SS Hydrus, sunk in the Great Storm of 1913, finally found in Lake Huron

Michigan State University Extension and Michigan Sea Grant have been actively engaged in education and outreach relating to shipping, shipwrecks, and maritime heritage for more than 35 years. We worked closely with coastal communities during the development of Michigan’s network of thirteen Underwater Preserves, and are a longstanding collaborator with NOAA’s Thunder Bay National Marine Sanctuary.

This summer, one of the Great Lakes’ shipwreck mysteries was solved when one hundred and two years after it sank in the great storm of November 1913, the SS Hydrus was found. Shipwreck hunter David Trotter and his crew discovered the wreck using side scan sonar in the middle of Lake Huron.

The Hydrus was one of 8 ships sunk in Lake Huron during the storm that swept over the Great Lakes from November 7-11 of that year, claiming 19 ships and the lives of 250 sailors. All 27 members of the Hydrus crew perished in the storm, considered the most devastating in Great Lakes shipping history, with winds gusting to 90 miles per hour and waves exceeding thirty-five feet. The sister ship of the Hydra, the SS Argus, was also a victim of the same storm. 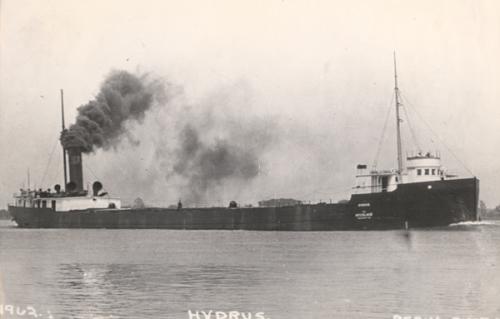 While Trotter has not revealed the actual location of the wreck, he has shared that the ship was found upright with its port anchor missing. The Hydrus was found facing west, indicating to Trotter that the ship may have turned to face the storm prior to its sinking. He also noted that the stern skylights and ventilation shafts of the ship were missing from the wreck site, suggesting that waves may have extinguished the fires of the boilers in the engine room.

The Hydrus was built in 1903 by American Shipbuilding Co. in Ohio. At that time, developments in steel hull construction were resulting in longer, wider ships capable of carrying cargoes several times larger than ships launched only two decades before. The trade-off for this increased carrying capacity, however, was that ship engines were underpowered and incapable of driving vessels through storms of the magnitude of November 1913. Reports from captains whose ships survived that storm told of experiencing their ships actually being blown backwards while attempting to go full steam ahead into the wind.

It took maritime engineers another three decades to replace the traditional triple-expansion steam propulsion systems with more powerful turbine and diesel engines. Marine architects worked even longer to develop construction technologies to help ships withstand the assault of wind and waves. Many of today’s vessels are twice the length of the Hydrus and carry ten times the cargo, but are powered by engines that allow them to cruise with the luxury of power in reserve.

While improvements in weather forecasting are often cited as the primary reason for the rarity of shipwrecks in our era, the contributions of marine engineers and architects have also greatly improved the chances for ships and sailors to survive the storms of today.

When it comes to water resources, can one person make a difference?