Striped and spotted cucumber beetles as pests of cucurbits in Michigan

Cucumber beetles are the primary insect pest of all vine crops in Michigan.

Larvae of both species are pale with dark heads and a dark abdomen tip, but are rarely seen because they are found in the soil. Striped cucumber beetles (Photo 3) may appear similar to the western corn rootworm, but can be distinguished by abdomen color; only striped cucumber beetles have a black abdomen. Western corn rootworm is not a pest of cucurbits.

Photo 2. Adult spotted cucumber beetles can be yellow or yellow-green, have black spots and a yellow abdomen. Photo by Amanda Buchanan.

While cucumber beetle larvae feed on cucurbit roots, adult feeding is more damaging to the crop. Adults feed on leaves and can stunt plant growth (Photos 4 and 5). Feeding by adult cucumber beetles can spread bacterial wilt disease among cucurbit plants, even when population density is low.

Feeding on flowers can reduce fruit production, and direct feeding on fruits causes scars and pock marks, which decrease marketability of fruits (Photo 6). 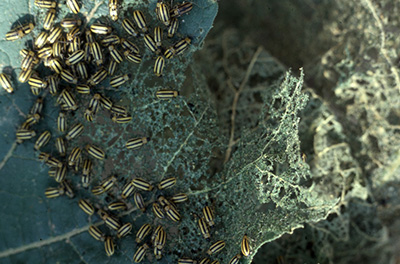 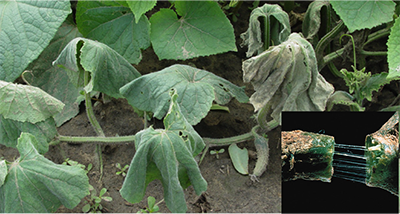 Photo 5. Cucumber beetle damage on cucurbit leaves can stunt plant growth and result in the spread of bacterial wilt. Photo by Celeste Welty. 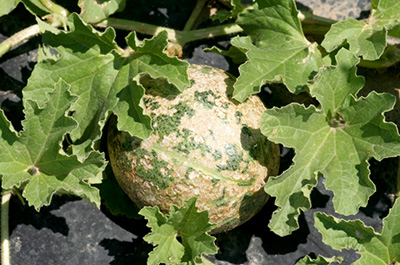 Cultural controls for cucumber beetles include removing field debris after harvest to reduce overwintering habitat and rotating crops so cucurbit crops are not planted directly into soils containing overwintering populations. Transplanting young plants rather than direct seeding can protect vulnerable seedlings from damage. Planting trap crops (cucurbit varieties highly attractive to cucumber beetles) at the perimeter of the harvested crop can keep cucumber beetles from migrating into the harvested crop.

Download tip sheet version of this article: Striped and spotted cucumber beetles as pests of cucurbits in Michigan