Study neighborhood typology to discover a library of information on form: Part 2

A typological approach to zoning puts greater emphasis on building form, but does not result in a true form-based-code. Still, conventional zoning can be tailored to reflect neighborhood typology, easing ordinance administration and reinforcing place.

So why does neighborhood typology matter in zoning and community development? One basic reason that zoning should be based on neighborhood typology is for ease of administration. Problems arise when redevelopment occurs in an existing residential neighborhood and multiple dimensional variances are required for a new residence or even a basic addition. In our example from Marquette, Mich., the minimum lot width of the General Residential district is 70 feet, making virtually every lot in the turn-of-the-century neighborhood (left side of the figure) nonconforming. Further, the side yard setback is no less than 6 feet, but many of the structures in the images on the left are set back less than that making the structures nonconforming too. Without applications to change the structures, no problem, but when residents want to add to the structure in some way, now the nonconforming structure is potentially becoming more nonconforming, an outcome that is usually prohibited by zoning ordinances and counter to the goal of phasing out nonconformities over time. Now in the case of Marquette, the ordinance does allow for construction on non-conforming lots of record, so long as all other provisions (e.g. setbacks) of the ordinance are met. 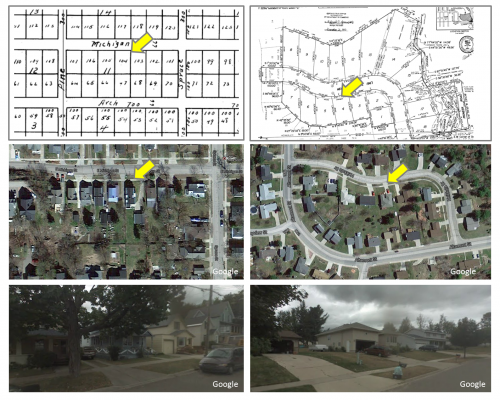 Beyond that, there are placemaking considerations for maintaining the character of existing neighborhoods (see Michigan State University Extension news article: Placemaking success is seen when people using those Places). In our example on the left side, the next two streets to the south (bottom of the image) compose the Arch and Ridge Streets Historic District, which is on the National Register of Historic Places. While tear-downs are rare, the redevelopment of the neighborhood overtime based on generic zoning regulations could compromise the character (think typology) of the neighborhood and erode the sense of place of the district. That is not to say that a strict architectural style should be rigidly enforced in order to preserve neighborhood character. Karl Kropf stated this well in Typological Process and Design Theory where he wrote:

“Conceiving of a town or parts of a town as static objects denies the processes by which they arrived at any given state. The job of the practicing planner and urban designer should not be that of a mortician but a doctor. The zones should be conceived as tools for promoting the life of the town and guiding future development. They should be viewed as a means of mediating between forms of which, on the one hand, codify the historical ‘accidents’ in the development of the town and give it its individual character and, on the other, those forms that contribute to the historical character of the zone and to the continuing life of the town as a whole.”

Typology zoning is essentially the approach Traverse City, Mich. uses in a basic way to differentiate between two different types of single family residential dwellings – conventional (9,000 square feed minimum); and those on small lots (5,000 sqare feet minimum). Beyond differences in lot size, there are differences in impervious surface coverage and front, side, and rear setbacks. The ordinance stops short of specifying alternate building height maxima and minima, nor does it regulate other building form standards that affect character such as frontage types, façade elements, or encroachments (structures extending into the public space or right-of-way). These would be elements found in a true form-based code and some communities even include architectural standards that regulate a particular vernacular or style.

It is important to note that a typological approach to zoning is not considered to be a form-based code, or even a hybrid between conventional, use-based zoning and form-based zoning (code). While some practitioners have referred to this approach as a hybrid code, according to the Form-Based Codes Institute, missing are form standards that apply to the public realm (see Hybrid codes versus form-based codes). A true hybrid code is one where conventional, use-based standards apply to some zoning districts in the municipality, while form-based standards apply to other zoning districts. Essentially, it is a hybrid code in the spatial or geographic sense, not in the blending of types of regulations within a district. The City of Marquette zoning code is an example of a true hybrid code.

In conclusion, if a true form-based code is not supported, desirable, or necessary for all districts in your community, consider a typological approach to zoning that takes, as a starting point for regulations, local building forms that already exist. “This approach treats the so-called historical built environment not as a museum but as a library,” said Kropf. Indeed, the City of Marquette is a rich architectural library and city planners will soon unveil several different typology-based zoning districts for various neighborhoods. Watch for future articles that highlight the process Marquette used to analyze neighborhood typology and amend the zoning ordinance accordingly.

The evolution of the New Economy: The digital economy