Updated from an original article written by Patty Bonito. 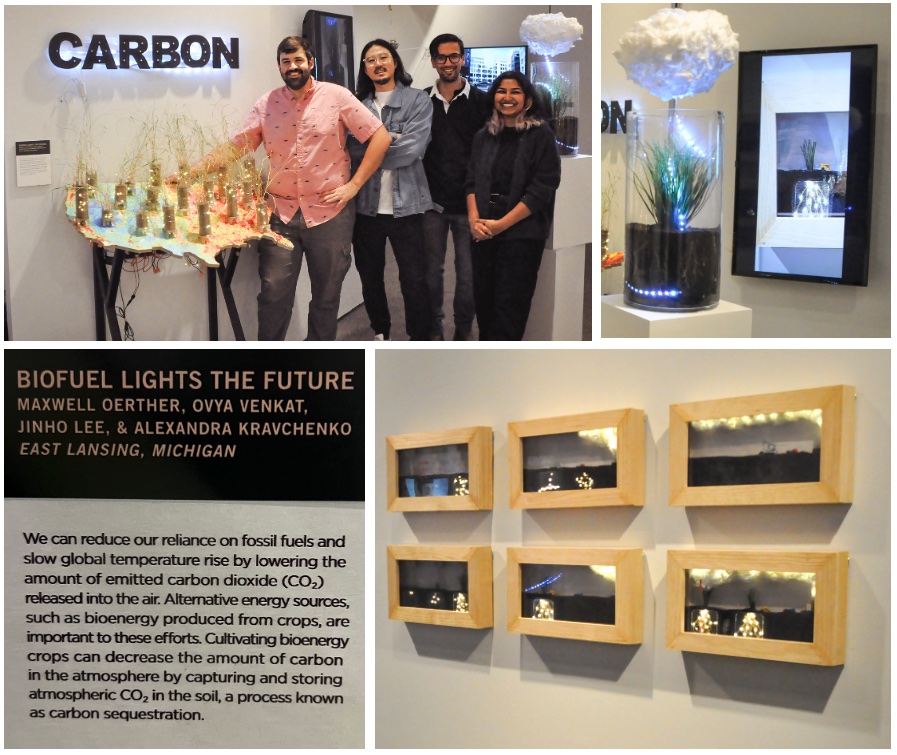 The purpose of our exhibit is, first, to explain to visitors how bioenergy crops capture and store atmospheric carbon dioxide (CO2) inside the soil; and second, to provide a visual demonstration of the amounts of soil and plants needed to compensate for the CO2 emissions given off across the US. “We hope this exhibit will inspire people to take a better insight into how important energy crops and soil around them for mitigating global warming.”

The exhibit features a large cylinder demonstrating the process of capturing CO2 from the air and sequestering it in the soil by plants. “And next to the cylinder,” Jin says “we prepared three pieces of diorama to let people know that how biofuels are made by plants and why conversion from fossil fuels to biofuels is necessary for mitigating global warming.” The exhibit also shows a map of the Unites States “representing how much more plants we would need to grow to capture atmospheric carbon and return it back into the soil.”

As part of the Great Lakes Bioenergy Research Center, Jinho Lee’s  fundamental research interest is soil carbon, one of the most influential elements in the ecosystem. It has an active pool and cycle, considerably influencing soil health and fertility and global warming mitigation. “Most of my research questions come from soil carbon accumulation mechanisms and carbon-based interactions highly influenced by plant diversity and the physical micro-environment and microorganisms of the soil,” Jin says.

Jin focuses on bioenergy crops, which help reduce dependence on fossil fuels and play a role in sequestering atmospheric carbon dioxide in the soil. “I estimate the effect of soil pore structure and distribution of particulate organic matter on soil carbon accrual, comparing monoculture with a diverse plant community,” Jin says. “I am also investigating which below-ground condition has more potential in carbon transfer between bioenergy crops and how the enhanced transfer affects soil carbon accrual.”