The Charrette was three days of jam-packed intense work – which might normally be done over several months. But the idea behind a Charrette, to engage the public early on in the development of a design or plan before anyone else has preconceptions of what it should be, do it quickly, with daily reports back to the citizens so people can say if the team is getting it right, or not, so it can be corrected, and move forward. Other Charrettes recently done in Michigan include Vision Charrette for Michigan Avenue/Grand River Avenue (Lansing) and for a downtown Alpena plaza and the third street corridor for Marquette, Mich.

This project is a part of a Michigan State University Extension applied research effort. The applied research is to explore the use of a form-based code/zoning for a rural setting. Form based codes are becoming more commonplace in many cities and villages in Michigan. This is because of some distinct advantages of form-based code over conventional zoning which is frequently found in Michigan. Such codes focus on form and character, which is often the urban form, such as how buildings relate to the public realm (streets, open spaces, parks and so on).

The question remains how a rural community can have the advantages of form based code. After all, rural areas do not have buildings and structures, or those elements of built form which a form-based zoning ordinance would focus on. The hypothesis is that rural areas do have a character that can be coded. That is the focus of MSU Extension’s involvement to determine if and how it might be done in rural areas under Michigan’s zoning law. If successful, this will be a demonstration project and a source for training for planning professionals to carry the concept on to state-wide application.

In the case of Suttons Bay Township, they had recently completed their master plan, a joint master plan with the Village of Suttons Bay. The purpose of the Charrette, held August 20-22, 2013, was to supplement the master plan with additional study and direction for purposes of developing a form-based code. Thus the project starts with a Charrette, conducting a synoptic survey of the township, and a host of prepared reference materials in preparation for the Charrette.

The Charrette was attended by 68 different people (from a township with a population of about 2,400) with a tremendous showing of concern and passion for their community. A major outcome of the project was the production of a zoning plan – a map which represents what would be planned as the zoning map for a form based code. This is the map that goes in the “zoning plan” part of a community’s master plan. It is not the final map, but represents the work of the Charrette with a great deal of public review and involvement. 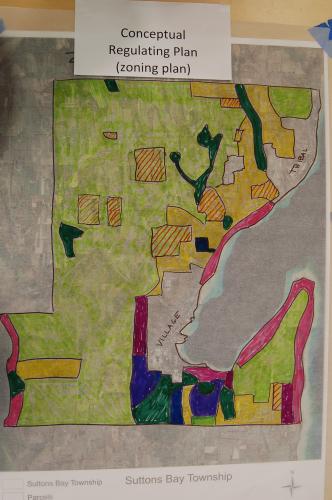 An example of the design work often accomplished at a Charrette is seen below with this before depiction of the corner of Peck Road and M-22. This concept-design is an outgrowth of residents and business owners expressing the need for more commercial development opportunities, the importance of an attractive “gateway” into the village of Suttons Bay from the south, importance of maintaining a transition from commercial to housing as one goes up Peck Road, need for more choices for housing types in the community, and the need for affordable housing. The design illustrates one possible way each of those issues can be addressed – and suggests parameters for how a form based code would handle those concerns. 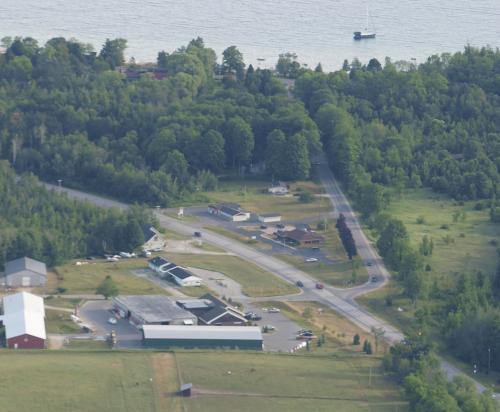 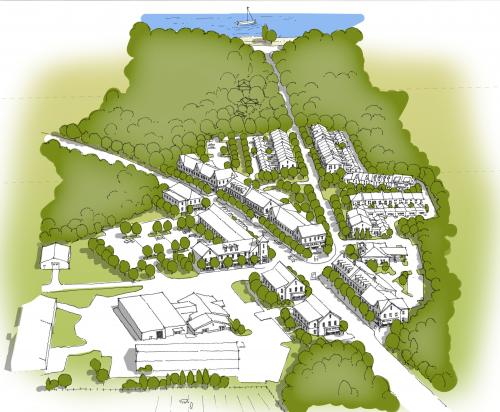 Photos: Peck Road and M-22 as it appears today vs. possible future vision. Illustration by Jeff Schwaiger of Schwaiger Design.

The future illustration shows a transition from commercial to row houses toward single family homes as one moves north. It provides more density of development by allowing buildings to be placed closer to M-22 with street design and complete streets principles.