Taking steps to use the MSU Land Acknowledgement more broadly

Understanding the history of the land that MSU resides on is part of an ongoing journey toward diversity, equity and inclusion.

The College of Agriculture and Natural Resources (CANR) is striving to be more cognizant about the history of the land Michigan State University (MSU) occupies, as well as current relationships to the land and the Native people and their ancestors who still reside here.

Land acknowledgments are one way to recognize this legacy and help create a space to expand conversations around diversity, equity and inclusion.

“Land acknowledgements are centered on learning about, and reflecting, on Indigenous histories and relationships to land. The learning process encompasses honoring the history of the land, treaties, tribes, communities and Indigenous knowledge and languages,” said Christie Poitra, interim director of the MSU Native American Institute (NAI).

Poitra is also an affiliate faculty member in the American Indian and Indigenous Studies (AIIS) Program in the College of Arts and Letters. She is a first-generation college graduate, Latina and first-generation descendant of the Turtle Mountain Band of Chippewa Indians.

The boundaries of the state of Michigan resulted from several land cessions from 1807 through 1842. During that time, Native people were forcibly removed from their land. The 1819 Treaty of Saginaw resulted in the cessation of the land that is now the campus of MSU in East Lansing, Michigan.

The history of land ownership in the United States is complicated. The federal government negotiated treaties with tribes often under duress or in ways that legalized violent land seizures from Native people.

MSU plays a role in that complex narrative as a beneficiary of land allotted through the Morrill Act in 1862, which enabled the establishment of the U.S. land-grant colleges. The Morrill Act allotted over 17 million acres, ceded from Native people, to states and territories to form colleges focused on practical agricultural, science and engineering education.

Using land acknowledgements is a steppingstone into what broader change could look like.

“We need to think further, too. How can we position this history as a more meaningful part of MSU’s narrative about itself beyond just a paragraph we read at events?” Poitra asked.

Next generations of students

The MSU Land Acknowledgement became a part of discussions with the Office of Diversity, Equity and Inclusion (ODEI) and CANR departments in 2019 when Jeff Keson, CANR assistant director for recruitment and retention, began updating undergraduate recruitment materials.

“We wanted to make sure we were showing people from across different identity intersections in our materials to help future students visualize themselves at MSU and as part of the College of Agriculture and Natural Resources,” Keson said. “We wanted to be more intentional about that in print and online materials, information, photography and graphics.”

These materials aim to show future students what campus and programs in the CANR are and aspire to be. Adding the MSU Land Acknowledgement along with the “You Belong Here” message, started through the ODEI, can help increase awareness and belonging for future Spartans.

“How can we say, ‘You belong here,’ when we don’t acknowledge where we’ve come from and some of those past injustices?” Keson asked. “As a diverse community of learners, we need to be willing to engage in these conversations in different ways.”

Before the novel coronavirus pandemic halted MSU recruitment travel, Keson was able to distribute the new CANR print booklet during a college night at a high school in Clare, Michigan. He said two Native American students at the event made a point to talk with him about the land acknowledgement. It gave Keson an opportunity to also talk about the NAI and the Michigan Indian Leadership Program, co-sponsored by the CANR and Office of the Provost for Undergraduate Research at MSU.

“Native communities have a rich history and unique experiences. We want to let them know they really belong here in a way that is explicit and not just implied,” Keson said. “Until these things are acknowledged, we can’t work through them and make paths forward.”

Land acknowledgements and historical awareness are important for graduate programs and research, too. Forestry doctoral student Antoinette Shirley is researching Indigenous involvement in forest management practices, analyzing the relationships between Indigenous and governmental agencies and how they differ in management across forest landscapes. Shirley is also studying the inclusivity of Indigenous science and knowledge in core K-12 curriculum.

“I come from a white, Mexican and Native household. That has influenced what direction I take in my research,” Shirley said. “I think using a land acknowledgement is helpful for prospective students. It sends the message to those Indigenous students that we’re going to acknowledge your existence here.”

Keson plans to build on the MSU Land Acknowledgement in CANR student recruitment and retention messages, as well as virtual recruitment events.

“In our college, we want to engage in these conversations. How can we address this in a way that is meaningful? How do we approach this in a way that makes people want to take a chance, be vulnerable?” Keson asked. “It’s an ongoing process. It’s just the beginning.”

Emily Proctor has been working in partnership with Native communities for over 12 years as a tribal governance educator for MSU Extension. Proctor’s projects include the development, delivery, and evaluation of educational programs in the areas of tribal governance, gerontology, diversity and youth leadership. She is a citizen of the Little Traverse Bay Bands of Odawa Indians in Harbor Springs, Michigan.

“We know that systems of oppression and being overlooked as Native people are issues that still exist in academia,” said Proctor. “A land acknowledgement is a piece of that journey toward awareness.”

The Michigan Inter Land-Grant and Extension System (MILES) partnership with the USDA National Institute of Food and Agriculture (NIFA) is one example of how Proctor and MSU Extension are supporting Native communities through community-based learning. (Read more about NIFA Tribal Programs and the MSU Extension and Bay Mills Community College MILES grant.)

Still, Proctor said there remain many misconceptions about tribes, and that can set back educational efforts in Native communities and around the state of Michigan.

“It’s important for everyone to have access to that knowledge, be it tribal and non-tribal,” she said. “Once that starts to happen, I have to believe that clarity will come, curiosity will come. Folks will go back to their homes, back to their lives thinking about this land acknowledgement, and it will settle in at some point."

Beyond the MSU Land Acknowledgement

A group of MSU leaders and faculty members in AIIS and NAI along with Indigenous stakeholders across campus are working on the next version of the land acknowledgement. The document, expected for 2021 release, will offer practical ways to put the words of the MSU Land Acknowledgement into action.

“I’m of the mindset that it’s important for non-Natives to learn about Native communities,” Poitra said. “The MSU Land Acknowledgement 2.0 is about engaging with the Native communities in an honest manner, and being respectful, humble and good hosts to the community members on campus, which is an important cultural practice.”

Beyond the historic knowledge, a land acknowledgment should also spur knowledge of modern tribal people and communities.

“It’s a responsibility to tell the history. It’s also a responsibility for us, as a university, to take the next steps,” Proctor said. “This is just a piece of that narrative, and we’ve got to continue talking about modern, contemporary tribal nations and people as well.”

Beyond the land acknowledgement, MSU and the CANR need to continue to look closely at systems like student admissions and employee hiring, and how those can be more diverse, equitable and inclusive.

Education is also one of those systems. The State of Michigan updated the K-12 Social Studies Standards in 2019, expanding content expectations related to Indigenous people’s histories and modern life in the state, but still Native American studies are often part of elective courses, not core classes.

“In general, people have few opportunities to learn about Native history, treaties and tribal sovereignty in the K-12 and higher education settings,” Poitra said. “I think diverse curriculum and learning experiences are really important.”

Shirley said that it would be impactful to see more Native perspectives within core science and natural resources courses, including those in higher education. For example, she said preliminary forestry courses cover how settler colonialism influenced forests, but they should also cover how Indigenous people shaped the land and forests prior to that.

“It can help begin the conversation for non-Native students to understand that Native peoples are still here, this is their land and then maybe they can start thinking about what that means,” she said.

Highlighting the MSU Land Acknowledgement is a start into supporting diversity, equity and inclusion initiatives. COVID-19 and racial injustices across the country are also bringing more conversations and perspectives to the forefront.

“The pandemic is this moment in history that is forcing us all to reflect on ourselves as individuals and how we relate to society, but also these societal institutions and how they relate to history. Broadly, it has shined a light on the societal inequities that cut across race, age, income, region and access,” Poitra said.

“I think what I see is hopeful. There’s a greater attention to diversity. Those conversations about diversity, equity and inclusion on campus are starting to address more complex identities and be seen through different lenses, and that’s positive.” 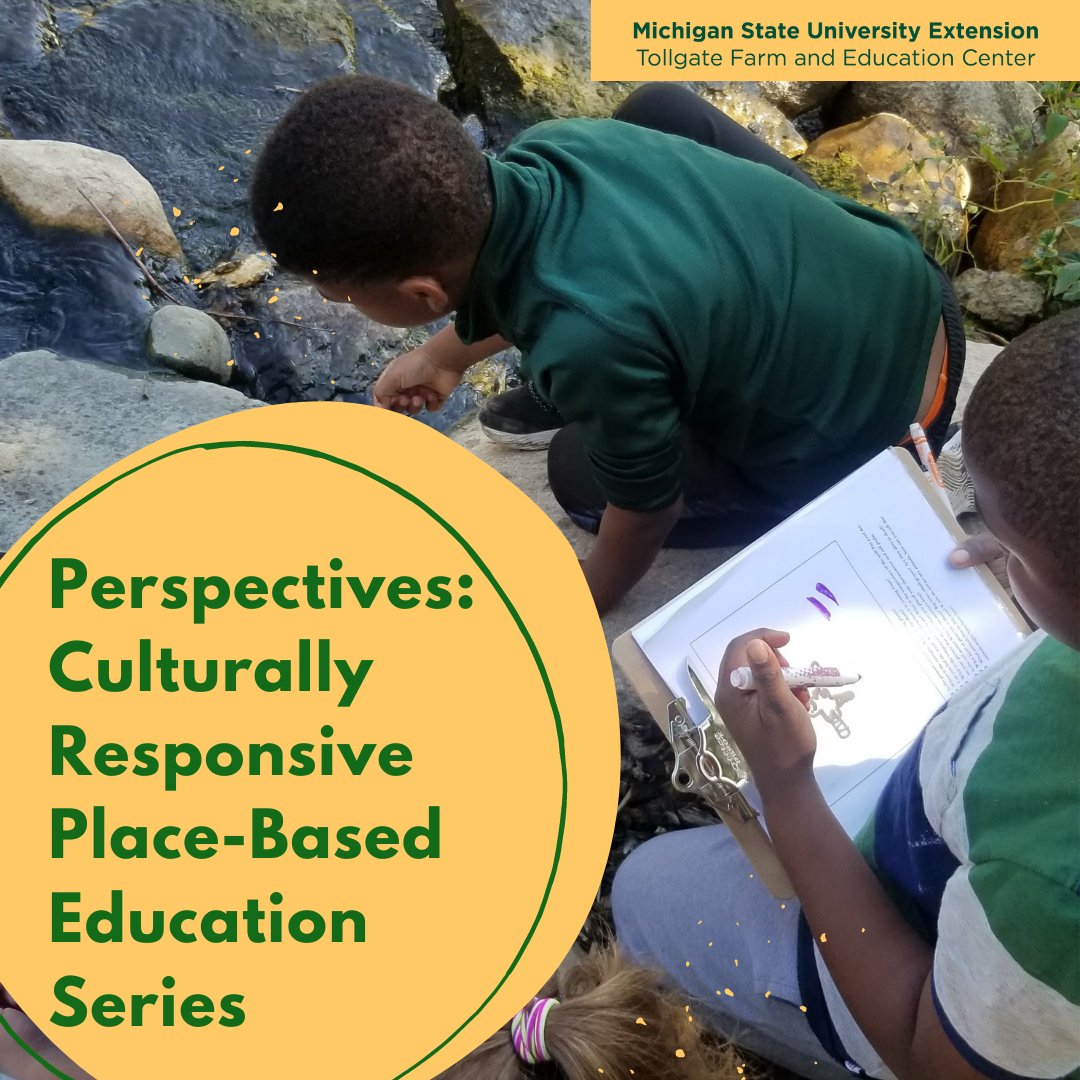 Building diversity, equity, and inclusion capacity for extension educators across the United States

Detroit Partnership for Learning and Innovation moves forward despite pandemic

This edition of In the Field focuses on CANR's diversity, equity and inclusion initiatives.

MSU to commemorate the 1819 Treaty of Saginaw through campus events