Targeting the balsam twig aphid stem mothers is the key to preventing curling and distortion of new growth.

Feeding by balsam twig aphids (Mindarus abietinus Koch) causes expanding needles to bend or curl. When aphid levels are low, damage is hardly noticeable. However, when aphid levels are high, current year needles become severely distorted and appear to be curled or wrapped around the shoot. When this level of damage occurs, needle growth may be reduced, causing the current year shoots to appear stunted. Balsam twig aphids rarely kill trees, but reduced tree growth and appearance can decrease tree value. 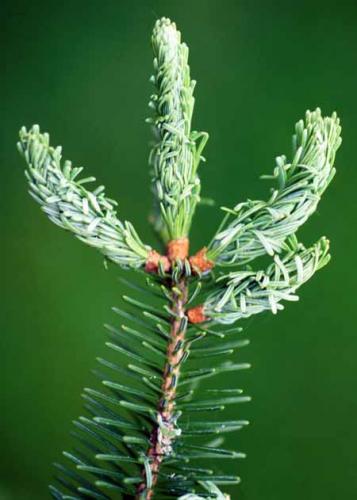 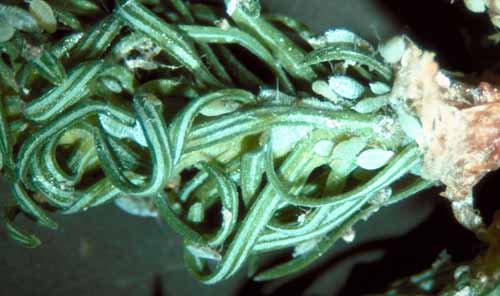 Balsam twig aphid eggs begin to hatch early in the spring and are usually completed in one to two weeks. Studies by Michigan State University’s forest entomologist Deb McCullough showed that egg hatch began at roughly 60 to 70 GDD50 and continue until approximately 100 GDD50. The newly hatched aphids are very small and difficult to see, but by approximately 100 to 140 GDD50 they have grown enough to be easily visible against a dark background. These first generation aphids are called “stem mothers.” 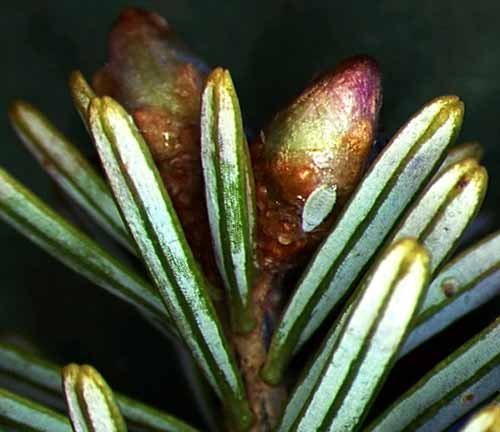 When spraying is necessary, apply insecticides at the proper time to prevent damage to current year foliage. The ideal time to spray is at 100 to 140 GDD50 after the stem mothers have hatched, but before the sexuparae (second generation) aphids are present. Typically at this point, buds are swelling but have not yet broken, and the stem mothers have hatched and are exposed at the ends of the shoots. It is very important to control the stem mothers before they produce the sexuparae. The sexuparae typically feed inside the expanding bud and are well protected from insecticides.

Growers that have had Fraser or balsam fir trees that were heavily damaged by this aphid last year should be scouting now. Scout the trees damaged last year as that's where you will most likely find aphids this year. If you had heavy damage last summer and are planning to harvest trees this year, apply an insecticide this spring. To prevent damage to your trees, you will need to kill the stem mother – this first generation.

Keep in mind, however, that if aphid populations are not very high and you did not have heavy damage last year, you probably don't need to spray.

How to identify field bindweed in Christmas tree production – Part 1

How to manage field bindweed in Christmas tree production – Part 2