Telecoupling and the spillover system: Causes and effects of zebra mussels in the Great Lakes

Examining the impacts of zebra mussels in the Great Lakes and beyond.

Editor's Note: This article is Part Three of a four-part series seeking to bring new scientific concepts to the public to inform policy discussions about future and current issues. James Roche is a Glassen Scholar working with the Michigan Sea Grant Extension Program Office He also is a James Madison student majoring in Political Theory and Constitutional Democracy, and is a member of the Science, Technology, and Environmental Public Policy Specialization conducted jointly by James Madison College and Lyman Briggs College. This article should be cited as: Roche, J. and Triezenberg, H.A. 2015. Telecoupling and the spillover system: Causes and effects of Zebra Mussels in the Great Lakes. Michigan State University Extension/Michigan Sea Grant.

The telecoupling framework is designed to help us explain how the world works by examining the interactions between socioeconomic and environmental systems locally and across long distances. The knowledge we gain from the telecoupled system will allow us to develop a more sustainable world because it lets gives us the whole picture concerning a certain issue allowing us to apply that knowledge to future problems. As discussed in previous articles the telecoupling framework can be used to help us better understand how distant interactions can impact us and the environment locally. We have already discussed the sending and receiving systems in relation to the Soviet grain trade and how they may have resulted in the introduction of zebra mussels (Dreissena polymorpha) to the Great Lakes (O'Neil 1994). Now, we examine the zebra mussel spillover system that was created in the Great Lakes region and its eventual spread through much of the U.S. by trade interactions and unknowing boaters. Within the telecoupling framework spillover systems are defined as "systems that affect and/or are affected by the interactions between sending and receiving systems" (Liu et al. 2013). Spillover systems also are broken down into a cause and effect relationship that is facilitated or impeded by agents involved in the system. The introduction of zebra mussels has led to a number of spillover systems in the Great Lakes, including their rapid spread out of the state and a fundamental alerting of the water in the lakes. For the zebra mussel the effects are felt in both the socioeconomic and environmental aspects of life.

Settled zebra mussels are small mollusks ranging in size from 0.5 mm up to typically 3 cm, and are native to the in fresh water areas of the Black Sea and Caspian Sea. Larger mussels are able to filter more than one liter of water per day filtering a broad size range of algae. Using the filaments at the bottom of their shells (byssal threads) zebra mussels attach to underwater surfaces such as rocks, intake and outflow pipes, native mussels, macrophytes and other zebra mussels (Benson et al. 2015). A female zebra mussel can produce over 30,000 eggs per season and the male can produce over 1 million sperm every season. When fertilized the eggs hatch in a few days and create free swimming larvae that are scattered by currents, eventually settling on a suitable surface (Snyder 1990).

Zebra mussels have been a nuisance in the Great Lakes ever since their discovery in Lake St. Clair in 1988. The introduction of zebra mussels was possibly caused by the interactions between the sending and receiving systems that operated during the Soviet grain trade in the 1980s, as discussed in second article of this series. By 1990, only two years after their detection, zebra mussels had spread to all five of the Great Lakes and began to make their way inland (Benson et al. 2015). By 2007, 225 inland Michigan lakes had confirmed zebra mussel populations. Currently zebra mussels can be found in the United States as far east as Massachusetts, as far south as Louisiana, and have even spread to fresh water bodies in California (Benson et al. 2015). While the initial introduction of zebra mussels was facilitated by unregulated ballast water release in the Great Lakes, recreational boaters have played a key role in the subsequent spread of zebra mussels to non-connecting inland lakes when boats are transported to inland water without proper cleaning (Snyder 1990).

The socioeconomic and environmental effects of zebra mussels are a result of three natural functions as a species: their ability to filter vast quantities of water quickly, the ability to attach themselves to almost anything, and the fact they reproduce at such alarming rates.

The ability of zebra mussels to attach onto a variety of surfaces means that they are able to blanket large portions of the lake floor and also disrupt water intake and outtake pipes at factories, power plants, irrigation systems and boats by inhabiting and eventually restricting the flow or completely blocking water pipes. It is estimated that zebra mussel cleanup cost between $1 billion and $1.5 billion from 1989 to 2004, other reports put the damage as high as $5 billion (Science, W., & Board, T. 2008).

Zebra mussels also interact with our socioeconomic and natural systems by exacerbating existing problems. The algal blooms that continue to plague Lake Erie and Lake Huron's Saginaw Bay are linked to excessive phosphorous use by local farmers. Mycrocystis and other blue-green algae blooms have been detected in these areas since the early 1990s and have impacted drinking water quality. As recently as August 2014, a Mycrocystis bloom made the water from Lake Erie undrinkable for more than 400,000 people in Michigan and Ohio (Lynch 2015). Zebra mussels aggravate algal blooms by selectively filtering the water in Lake Erie and Saginaw Bay. The zebra mussels in these bodies of water will not filter the toxic Mycrocystis and other blue-green algae, but will instead filter other non-toxic types that naturally compete with the toxic algae poisoning the water supply. Not only do the mussels selectively filter away from the toxic algae, they fertilize its growth by excreting nutrients from the consumption of the other algal types further worsening the problem. These algal blooms also impact the fishing industry and the very ecosystem of the lakes by creating an anoxia (low oxygen concentration) in the lakes killing fish and other animals (Vanderploeg 2002). The interaction of the zebra mussel with the environmental and socioeconomic systems of the Great Lakes leads to impacts that affect almost every facet of life in the region. 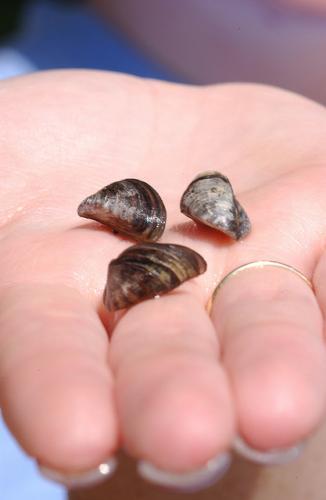 While the introduction of zebra mussels to the Great Lakes may have been a direct result of the Soviet grain trade that took place in the 1980s, its effects have been far reaching and have impacted the environmental and socioeconomic systems in the Great Lakes in ways no one could have predicted. By applying the telecoupling framework to examine the possible unintended consequences and spillover systems that may result from our interactions we can create a more sustainable world.

In the final article of this series the telecoupling framework will be applied to the Great Lakes fisheries systems, and its connections to other systems and other places.

Part Three: Telecoupling and the spillover system: Causes and effects of zebra mussels in the Great Lakes

O’Neill, Jr, C., & Dextrase,, A. (1994, March 1). The Introduction and Spread of the in North America Zebra Mussel. Retrieved August 19, 2015, from http://www.csu.edu/cerc/documents/TheIntroductionandSpreadoftheZebraMusselinNorthAmerica.pdf

Snyder, F. (1990). Zebra mussels in the Great Lakes: The invasion and its implications.