Editor's Note: This article is Part One of a four-part series seeking to bring new scientific concepts to the public to inform policy discussions about future and current issues. James Roche is a Glassen Scholar working with the Michigan Sea Grant Extension Program Office. He also is a James Madison Student majoring in Political Theory and Constitutional Democracy, and is a member of the Science, Technology, and Environmental Public Policy Specialization conducted jointly by James Madison College and Lyman Briggs College. This article should be cited as: Roche, J. and Triezenberg, H.A. 2015. Using telecoupling framework helps promote sustainability in global trade. Michigan State University Extension/Michigan Sea Grant.

As our behaviors rapidly globalize, distant interactions between individuals and nations become increasingly common taking the form of trade in material goods (e.g. food, textiles) and flows of information (e.g. ideas, culture). Through these global interactions, we have been able to advance the quality of life to historically unthinkable levels for a large portion of the world’s population. However, this high standard of living comes with a cost. As a direct result of distant interactions between people in a globalized world, we have seen a variety of negative consequences, such as climate change, pervasive poverty, food insecurity, water scarcity, and rapid ecological change (Liu et al. 2013). If we wish to continue supporting, improving and sharing a high standard of living with the rest of the world, finding a sustainable way to organize global interactions to mitigate negative impacts will be necessary. The first step is to understand how local interactions between the environment and the economy relate to the world at large, and how through the management of these interactions we can create a more sustainable world. A recently developed framework known as telecoupling may hold the key to answering these questions.

The maple syrup market between the United States and Canada is a great example of the telecoupling framework. As of 2012, Canada exported 85 percent of the world’s maple syrup, mainly due to their comparative advantage in producing maple syrup products (Darrach 2014). Comparative advantage means a nation that is good at producing one specific good will focus on creating it, and then use the profits from its production to buy other goods the country cannot produce as well or as cheaply.

The climate (natural system) in Canada, specifically the Quebec region, produces around 90 percent of the country’s maple syrup, is especially conducive to production.  While maple trees grow as far south in North America as Missouri, they need a specific weather pattern in order to produce the large quantities of the sap used to make maple syrup. Sap harvested during the late winter and early spring as temperatures begin to go above freezing during the day and drop down below freezing at night. The shift between freezing and thawing causes changes in pressure in the tree making the sap to flow and allowing harvesters to easily collect it and produce syrup (Maple Syrup Blog 2015). From all the maple syrup produced in Canada, 63 percent is then exported to the U.S., even though the U.S. has the ability to produce maple syrup in the Northeastern states (Darrach 2014). Canadian Imports account for 61 percent of all the maple syrup for consumption in the United States as of 2011 (Holz-Clause 2014). The massive importation of maple syrup by the U.S. also is partly due to a cultural affinity for maple syrup that many other nations do not have. In contrast, In 2011 Canada imported 50 percent of its fresh fruit from the U.S. (Statistical Overview of the Canadian Fruit 2011) Canada’s cold climate that provides it with a comparative advantage in the production of maple syrup is not suitable for many of the fruits that its citizens wish to enjoy. The U.S., on the other hand, is able to produce some maple syrup but the Canadian market still far exceeds U.S. production. However, a large portion of the U.S. is suitable for fruit production giving it a comparative advantage in that market.

Telecoupling is a relatively new framework in the scientific field that examines the global relationship between natural systems (e.g. ecosystems, weather) and human systems (e.g. economics, culture) connected by the flow of goods and ideas across global distances, as opposed to simply focusing on the environmental or human issues in localized areas. Each coupling is divided into three distinct groupings knows as the sending system, receiving system and the spillover system that all interact through flows. The sending system refers to the origin of the good, animal, or idea that flows into the receiving system, which then benefits or is harmed by the flow of goods and/or ideas (Liu et al. 2013). Between the sending and receiving systems there may exist a feedback loop where the receiving system sends material or immaterial goods back to the sending system.

If framed in the context of the maple syrup exchange between the U.S. and Canada, Canada acts as the sending system by exporting large quantities of maple syrup to the U.S., which is the receiving system. The feedback loop would consist of the money and fresh fruit sent back to Canada in exchange for the syrup.  Finally, spillover systems are natural and human systems that are unintentionally impacted by the flows between the sending and receiving systems. A spillover system can usually be placed within three categories: a stopover (such as a port or migratory bird resting area), in 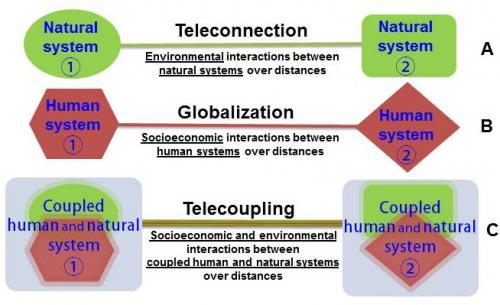 the path of the flow (like an oil tanker spill), or systems that interact with the sending and/or receiving systems. (Liu et al. 2013)

Following the Canadian example, a possible spillover system could be that U.S. producers of maple syrup are being out-competed by Canadian producers possibly due to the lack of import tax under the North American Free Trade Agreement (NAFTA). In addition, more carbon-dioxide and other pollutants are produced by the long distance transport of Canadian syrup. The majority of Canadian maple syrup producers are located within a 150 mile circle of Quebec City which is located about 220 miles north of the border Canada shares with Vermont. In the U.S., maple syrup can be produced in a number of states ranging from the east coast to as far as Minnesota and as south as northern Kentucky. If the closer U.S. maple syrup source was used it could potentially limit pollution and stimulate the local economies.

Within each of the three telecoupled system, exists two other components that examine the cause and effect relationship that allowed the sending, receiving, or spillover system to operate. A cause within the telecoupled system is something that influences the creation of the system. These can include political, economic, cultural, technological, or ecological changes that produce new dynamics (Liu et al. 2013). Usually there is more than one cause in a telecoupling relationship. An effect, on the other hand, refers to the mixed socioeconomic and environmental impacts of the telecoupling. Effects can include changes in land use, new policies, different trade patterns, new species introduction, and a host of other outcomes. Each of these causal relationships are driven by agents that act as independent decision-making entities that either facilitate or block the flows within the telecoupling (Liu et al. 2013). These agents can include legislative and governmental officials, businessmen, public and private interests, and animals. 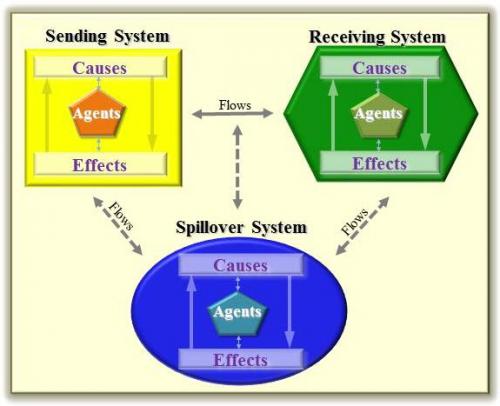 On the Canadian side, or sending system, of the telecoupling framework the cause would be a  predisposition for the production of  maple syrup because the natural system within the nation are ideal for the production. The effect would be large exportation of maple syrup to the U.S. The agents would consist of maple syrup producers, consumers, traders and exporters. The cause in the U.S. receiving system is its comparative advantage in fruit production as opposed to maple syrup production, which has the effect of importing large quantities of maple syrup and exporting fruit back to Canada. The agents would include the smaller U.S. maple syrup producers, fruit growers, traders and consumers. The feedback loop would be the exportation of fresh fruit and money to the Canadians. The spillover system consists of areas that are negatively impacted from increased pollution due to transportation of products. The cause of this system is Canada’s ability to out-produce the U.S. requiring longer transportation distances and has the effect of increasing the release of greenhouse gases including carbon dioxide. The agents in this case are Canadian producers, U.S. producers, transportation industries and consumers.

Essentially, the telecoupling framework is a way to look at how coupled human and natural systems in one place are connected to human and natural systems in another part of the world, says Anna Herzberger, a doctoral student with Dr. Jianguo "Jack" Liu. Dr. Liu, lead author on the scientific article describing the telecoupling framework, which is now getting international attention, is a University Distinguished Professor of Fisheries and Wildlife at Michigan State University and Director of the Center for Systems Integration and Sustainability.

The telecoupling framework will be instrumental in helping us understand the rapidly globalized world we find ourselves in. Understanding telecoupling can help us better understand pressing invasive species issues such as Zebra mussels (Dreissena polymorpha). Zebra mussels were first detected as an invasive species in the Great Lakes region in 1988. In this article series, we will explore how Zebra mussels were introduced to the U.S., their spread, effects, and what we can learn by using the telecoupling framework to examine global interactions and help inform future decisions.

Part Three: Telecoupling and the spillover system: Causes and effects of zebra mussels in the Great Lakes

Learn about lakes, streams, and watersheds with MSU Extension