The Policy Project Interacts with the Media in Ebonyi State

Updated from an original article written by Oyinkan Tasie. 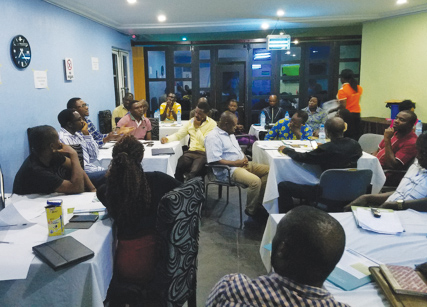 On June 22, 2017, the Feed the Future Nigeria Agricultural Policy Project held an interactive session with the Media in Ebonyi State.

Twenty seven (27) journalists from 18 Media Houses in Ebonyi State. In addition to representatives from radio, television and print media, the Public Relations Officer and other staff of the State Ministry of Agriculture and Natural Resources also attended.  Five (5) of the 27 Journalists were also Newspaper Publishers.

The session focused on the role of the Media in strengthening the Agricultural Policy Process in Ebonyi State. A major outcome of the session was the commitment by one of the publishers to devote a column on agriculture in his Newspaper which hitherto had none. The policy project will leverage on this session in its upcoming project activities on capacity building for media.

Perceptions and exposure to climate events along agricultural value chains: Evidence from Nigeria

Growth and Transformation of Chicken & Eggs Value Chains in Nigeria