The blueberry mummies return! Here’s how to be prepared.

Mummy berry is a unique disease. The fungal pathogen needs to infect the plant twice to complete its life cycle; the first being new shoots at the beginning of spring growth, and the second during bloom, where the fungus is carried to the flowers by insects (e.g., bees and flies) infecting the bloom and fruit. The infected fruit becomes a mummy and overwinters to infect the plants again in spring.

In 2018, Michigan had normal winter with a lot of snow early, cold temperatures near or below zero around New Years and a relatively mild February and March. March has been very chilly and the blueberry bushes in Van Buren and Ottawa counties are currently at early bud swell. The blueberry bushes are ready to grow when warm temperatures return. As blueberry buds begin to grow, they become susceptible to infection.

Mummy berry in blueberries is caused by the fungus Monolinia vaccinii-corymbosi. This pathogen is primarily an issue in established blueberry fields and the first round of infection occurs during the ascospore stage, when spores are actively discharged from apothecia (trumpet-like mushrooms) on overwintered, mummified blueberry fruits on the ground below blueberry bushes (Photo 1). Shoots are typically only susceptible when blueberries have reached the green tip growth stage (Photo 2). 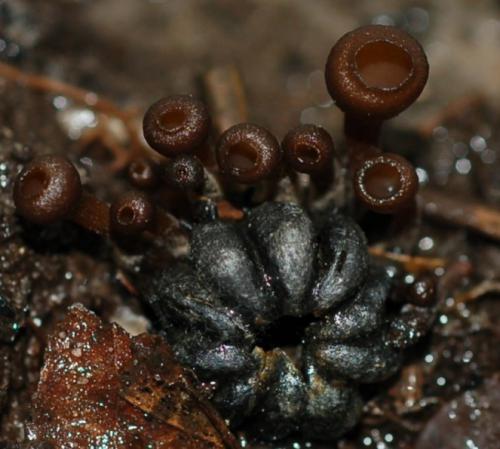 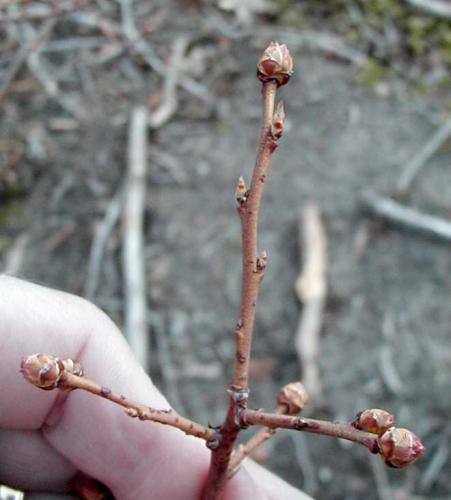 Photo 2. The large terminal flower buds on these shoots have swollen and are about to burst. The smaller leaf or shoot buds below are at green tip. Note that growth is more advanced in the uppermost buds (about a quarter-inch) and is less on each of the buds below. Photo by Mark Longstroth, MSU Extension.

Scouting for germinated mummies is difficult due to their small size. Once you see a mummy, they are clearly visible as small, blackish pumpkins. If you find mummies in the field, mark it so you can easily return. As spring warms, look for mummies with developing apothecia. Apothecia do not typically discharge spores immediately. Spore discharge normally begins when the opening of the apothecia is about an eighth of an inch in diameter. Because it is very difficult to scout an entire field, consider control options if apothecia are observed.

If mummy berry is a significant problem in your region, consider selecting resistant cultivars when planting new blueberry fields. Cultural practices in established fields include raking to disturb the mummies and disrupting their germination. Controlling weeds in blueberries during the previous years’ growing season makes finding mummies much easier. Mulching can serve as a disease-management method. Research has shown that apothecia can be significantly reduced when rows are mulched with over 2 inches of sawdust. For effective management, apply mulch in in late winter (e.g., mid-March) or earlier in the fall and winter months if maintained at least at a 2-inch depth.

A variety of fungicides are available for controlling mummy berry. Many of these materials have good activity against both stages of the disease. Most materials are better at controlling one phase of the disease, shoot blight or the fruit rot than the other. Michigan State University Extension recommends against using the same material over and over again to control plant diseases to reduce the risk of fungicide resistance. See the table from the MSU Blueberry Facts: Mummy Berry bulletin (E2846), and current fungicide recommendation can be found in Michigan Fruit Management Guide (E054). 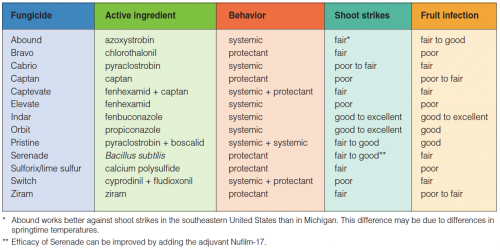 Fungicide efficacy against shoot and fruit stages of mummy berry infection in blueberry in Michigan (from MSU E2846).

Several universities are working to develop a prediction model for the emergence of mummy berry apothecia. The primarily difficulty is the variability in degree-days over in several seasons in Michigan. Historic data of ascospore discharge data from several years demonstrates this variability in Michigan blueberry fields. 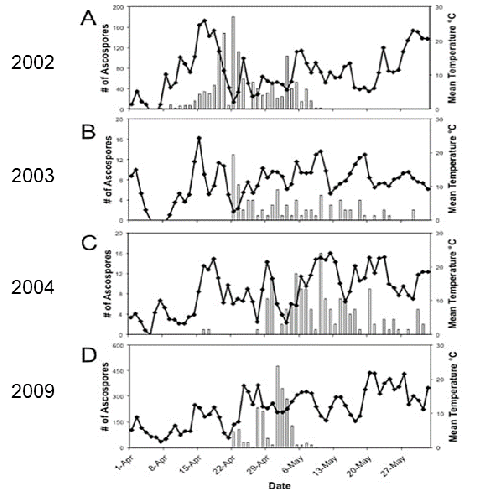 Air temperature measurements (black solid line) and detection of Monilinia vaccinii-corymbosi ascospores (gray bars) in the air from April 1 to June 1 across four different years. The traps were located in unsprayed areas in commercial blueberry fields in Grand Junction (A, B and C) and Nunica MI (D). (Dabbah et al., 2016, Phytopathology S4.132).

Future work in the MSU Small Fruit Pathology Program will help validate models developed by MSU and other universities and attempt to deliver this content in user-friendly manner to Michigan blueberry growers.