T is for Thielaviopsis root rot on ornamentals

Symptoms of Thielaviopsis black root rot are often mistaken for nutrient deficiencies. Plants with black root rot often show symptoms that mimic nutrient deficiencies such as stunting with older leaves shriveling. Leaves may turn yellow and the youngest leaves become stunted and tinged with red. In mild infections, older leaves are yellow-green with the veins retaining their green color. Black root rot may also affect the lower stem on crops such as poinsettia, causing cracks that appear black.

Purchasing plugs that are free of black root rot and using stringent sanitation practices are the best preventive measures against black root rot. This pathogen produces a spore (Photo 3) that can persist on floor mats, greenhouse benches, or flats and pots. Michigan State University Extension does not recommend reusing plug trays for crops that are susceptible to Thielaviopsis. University studies have shown that fungus gnats and shore flies can move this pathogen around a greenhouse by eating the spores and excreting them into nearby pots.

If you have a Thielaviopsis problem and a fungus gnat problem, then you will have an increasing problem. Once this fungus is established in a crop or in a greenhouse, an effective clean-up and fungicide program is needed. Fungicides applied preventively may also be needed to protect the ornamentals that are particularly susceptible to the pathogen. 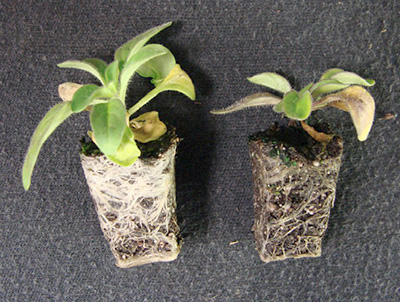 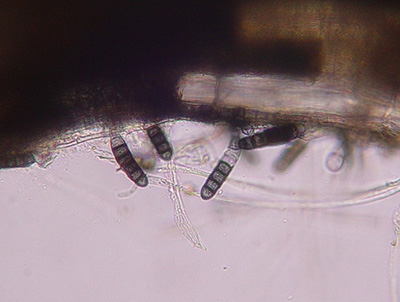 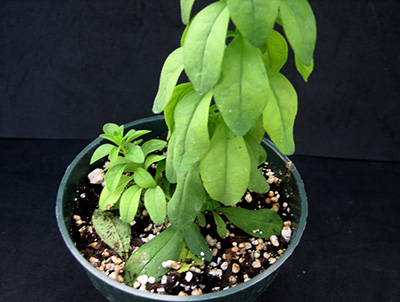 Photo 4. Yellowing of foliage of calibrachoa infected with Thielaviopsis.

The “A” and “B” Team tables of recommended fungicides for Thielaviopsis of ornamentals are the result of multiple trials conducted at MSU. The FRAC code is an alphanumeric code assigned by the Fungicide Resistance Action Committee and is based on the mode of action of the active ingredient. When treating ornamentals for Thielaviopsis root rot, rotate among products with different FRAC codes to reduce the possibility of resistance developing in the Thielaviopsis fungus. Ornamental products listed in the A Team table consistently provide effective control. B Team products are a good rotational choice for use with A Team fungicides when disease pressure is not severe.

Based on these studies, ornamental fungicides that have thiophanate-methyl as the primary active ingredient (see table below) should be used frequently according to the shortest reapplication interval listed on the label. Good rotational products include Terraguard and Emblem or Medallion since they have a different mode of action and were shown to be effective in MSU studies against black root rot. B Team ornamental products are a good rotational choice when the disease pressure is not severe and should be used in rotation with A Team products.

Choosing an effective fungicide to control black root rot on ornamentals is critical because a misstep early in the disease epidemic may result in an unsalable crop. If the disease has progressed too far before fungicides are applied, it is likely the plant will not recover and be marketable. It is recommended to use the highest labeled rate of each treatment with close reapplication intervals. Variable results have been observed with Empress Intrinsic, so care must be taken when using it in a rotational fungicide program to ensure that disease control is maintained.

Insecticides for common pests on greenhouse vegetables and transplants

Biopesticides for use in greenhouses in the U.S.

Controlling whitefly in the greenhouse