Four-lined plant bugs, Poecilocapsus lineatus (Hemiptera: Miridae) are active on a wide variety of perennials, shrubs and trees. Feeding by the plant bugs leaves sets of leaf spots that look a lot like a disease. This insect gets its common name from the four black stripes present on its front wings of the adults.

Four-lined plant bugs can extensively damage the leaves of its host by its feeding. Like all plant bugs, the four-lined plant bug has piercing mouthparts that are inserted into the leaf to suck out plant juice. In doing so, the bug injects saliva that contains enzymes that kill the plant tissue directly around the feeding puncture. Nymphs and adults cause characteristic necrotic spots, which might be confused with disease symptoms.

This bug overwinters in the egg stage. The eggs hatch in early to mid-May in Michigan. Nymphs require 30 days or so to develop into adults. There are two to three generations each year, but the most damage is caused by the first generation.

Lecanium scale numbers have been high on maple trees in northern Michigan. There are 12 or so related species of scales that are commonly referred to as "lecanium scales" primarily because entomologists cannot distinguish one species from another. Most species of lecanium scales have similar life histories and feeding habits.

The period of greatest growth, most active feeding and severe injury to the host occurs from spring to early summer. Eggs develop under the protective shell of female scales beginning in late spring or early summer. The eggs hatch and the tiny crawlers emerge from beneath the female "shell" and migrate to the leaves, usually in June and July.

The young scales feed on the leaves until late summer and then migrate back to the twigs where they spend the winter. Generally, there is only one generation of lecanium scales each summer. 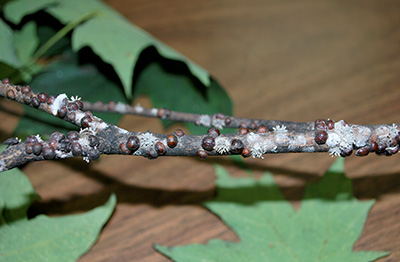 Start scouting for spruce spider mites, Oligonychus ununguis. We are finding mites active on several conifer species such as spruce and Fraser fir. Although the mites may be actively feeding by now, we often don’t see the damage until later in June or July. They are often a problem on fir and spruce trees, but populations can build up on nearly all Christmas tree species.

Spruce spider mites are considered a cool season mite and thrive when daytime temperatures are in the 60s and 70s. Newly hatched larvae are pinkish, but turn dark green or dark red after initial feeding. Christmas tree growers, landscape management professionals and homeowners should keep an eye out for the dark mites or their webbing, especially if you had damage from mites last year.

If you suspect mite problems, perform a foliage check. Take a piece of white paper (eriophyid mites show up best on a black background), hold it under a branch suspected of having mites and strike the branch hard against the paper. This should dislodge the mites, and even though they are very small, you should be able to see the dark, oval spider mites against the white background or the cream-colored eriophyid mites on the dark sheet. 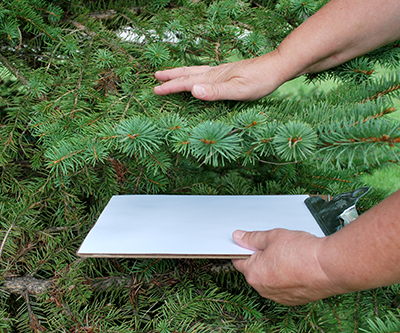 The simplest way to scout for adult and juvenile mites is to shake or tap a branch over a scouting board or piece of paper. Photo by Jill O’Donnell, MSU Extension

Small, red and black striped beetles, known as red turnip beetles, Entomoscelis americana (Coleoptera: Chrysolmelidae), are feeding on weeds in Christmas tree fields. They are not a problem on Christmas trees and are typically found feeding on plants (weeds) such as wild mustard, shepherds purse and hoary alyssum. 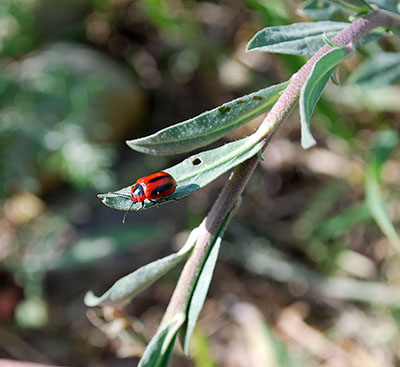 The characteristic curling of the new growth caused by balsam twig aphid, Mindarus abietinus, is showing up on Fraser and balsam fir trees. Insecticide treatment from this time onward will likely do little to prevent damage, and aphids are well protected within the shoots. The good news is that needles will continue to elongate for several weeks. By late summer, much of that damage will be outgrown. 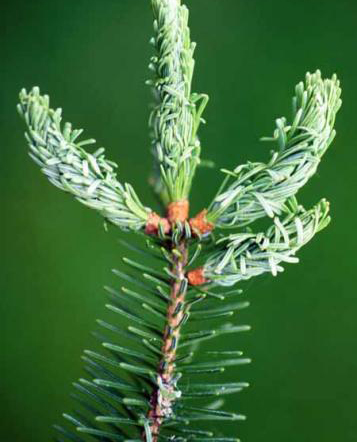 Frothy, white spittle masses can be found on the shoots of several conifers. These spittle masses are caused by pine spittlebug, Aphrophora parallela. Nymphs feed on the tree’s sap and produce the characteristic frothy masses. Usually, no control is required unless the spittlebug is abundant and the trees look as if they were coated with snow. 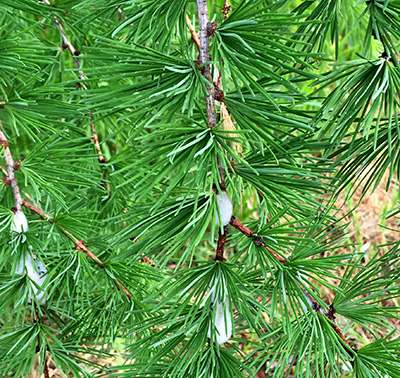 We're seeing a number of cases of verticillium wilt, Verticillium dahlia, on Japanese maple, which is very susceptible to this disease. Verticillium is a soil fungal disease that can cause a wilting or dieback of branches and can lead to the tree dying. The wood of affected plants shows a gray to olive-green streaking if the bark is peeled from recently affected branches. Positive identification can be made by MSU Diagnostic Services. 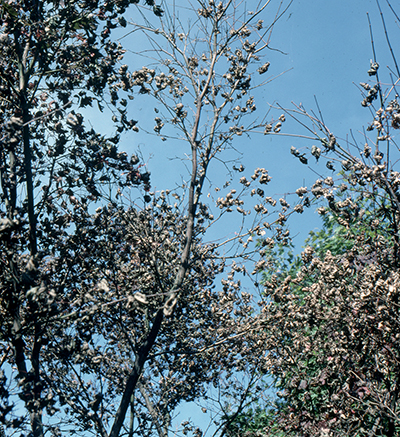