Two more spruce problems that are not herbicide related

Cooley spruce adelgid and spruce needle rust result in browning of current year’s growth on spruce and may be mistaken for Imprelis damage.

As many news outlets continue to run articles on damage to conifers related to application of the new herbicide Imprelis, many homeowners may automatically assume that injury to their spruces is herbicide related. As Dennis Fulbright and his colleagues noted in earlier MSU Extension News for Agriculture articles (see links at bottom of this article), there are several pathogens associated with an on-going and widespread decline of spruces in Michigan. Most, but not all, of the pathogens associated with the general spruce decline affect multiple age classes of needles. This is useful in differentiating these diseases from the current issue with Imprelis, which most commonly affects only current-year’s needles on blue spruce.

In addition to the spruce decline-related pathogens discussed by Fulbright, here are two common spruce problems that we are currently finding in landscapes that result in browning of current-year’s growth and may be mistaken for herbicide damage.

Cooley adelgids are small insects related to aphids that form galls in newly-formed branch tips of Colorado blue spruce (Photo 1). As the adelgids mine into new shoots, the shoots form pine cone-looking galls. During the process, the affected shoot tips will turn brown. In heavy infestation, galls can cover nearly the entire tree. Gall adelgid is relatively common in Michigan and is considered a perennial pest of blue spruce, especially when grown in association with Douglas-fir, which is the alternate host. 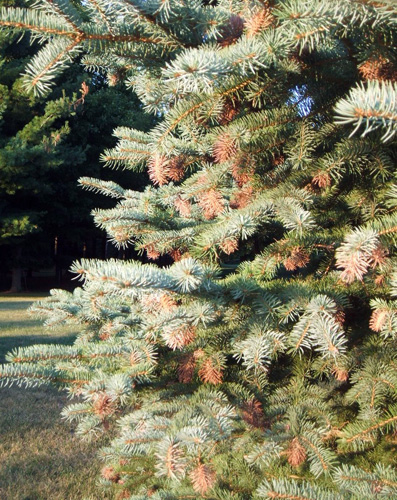 Needle rust is caused by a fungal pathogen that infects current-year needles. Common needle rust fungi require alternate hosts (Labrador tea and leather leaf) that occur in swampy wet areas, so the disease is more common in low-lying areas. Symptoms first appear as whitish blisters on the needles which then release orange spores (aeciospores). In heavily infected trees, the tree has an orange-pink hue (Photo 2). Eventually these needles will turn brown or off-color and fall off. For more information, read Fulbright’s article on Spruce needle rust disease. 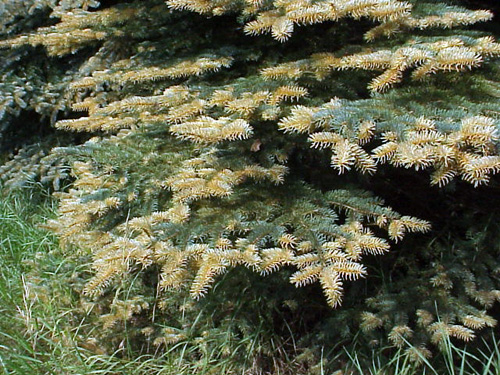 Cooley spruce gall adelgid can be controlled either later this fall or next spring. Managing spruce needle rust involves either controlling the secondary host(s) or planting resistant species.

Although herbicides have the potential to cause significant injury to non-target plants, the damage is limited in scope to areas where the product has been applied. Imprelis was only applied by professional applicators. If a homeowner reports spruce decline and they or their neighbors did not use a professional service to treat their lawns for weed control, the problem is not Imprelis. More likely the issues are related pest and pathogen problems discussed earlier by Fulbright and this article, or environmental stresses associated with the site.

Do the chilly temperatures have you wondering just how cold it got last night?