European crane fly is now established in many locations in southeast Michigan and near Grand Rapids. Here are management recommendations for heavily infested turfgrass and lawns.

Two species of crane flies from Europe, Tipula paludosa (European crane fly) and Tipula oleracea (common crane fly), are now established in many locations in southeast Michigan and in the greater Grand Rapids, Michigan area. The adult stage of both of these pests looks like a giant mosquito with a wing span of more than 1 inch. They prefer moist soils, so they are most likely to be found in irrigated turf, although with enough rain they can develop in almost any lawn.

The European crane fly adult flies, mates and lays eggs in August and September and may be seen in or near infested lawns or golf turf in large numbers. The second species, the common crane fly, also emerges from late July to September, but may also have a second generation of adults that emerge in the spring. The larvae of both species, called “leatherjackets,” grow to become nearly 1 inch long and look like a brown or gray caterpillar with no head or legs. 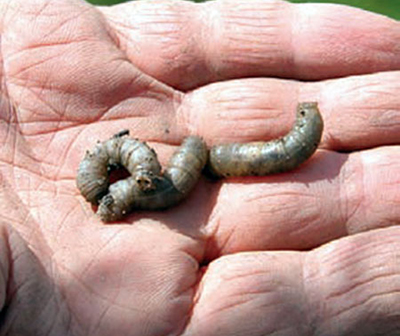 In October the leatherjackets consume enough turf roots, stems and leaves to cause visible injury to lawns or golf courses. Turf damage begins to appear as a general thinning of the infested turf, but may progress to large, dead patches. Symptoms like thin turf and digging activity by skunks and raccoons may appear to be caused by grubs, but the presence of gray- to tan-colored leatherjackets will confirm the pest as European crane fly.

Michigan State University Extension is still looking for a good test site in Michigan where we can conduct an efficacy trial. This could be irrigated rough on a golf course, or a large lawn area where we can maintain control plots which may have some damage. We would appreciate any suggestions you may have for potential sites. If you know of a good location, please send an email to Terrance (Terry) Davis at tdavis@msu.edu.