Low temperatures often depend on atmospheric conditions and the local topography. Calm conditions allow the temperatures to drop quickly after the sun goes down. You can track freezes with MSU’s Enviro-weather.

Radiation freezes are characterized by clear skies and dry air. Often the day is warm and pleasant when the sun is out. During the day, the ground absorbs heat from the sun and gets warmer. At night, the ground radiates this heat back to the sky. A layer of clouds can help trap the heat by absorbing this radiation at night and reradiating it back down to the surface. A clear night sky allows that heat energy to escape to the open sky. As the ground cools, it chills the layer of air above it. A lack of wind prevents mixing in the atmosphere so that the ground can cool a thicker and thicker layer to cooler and cooler temperatures. Temperatures near the ground can get very cold.

Many of the freezes that cause problems in Michigan are radiation freezes. These freezes can occur in winter or spring. Radiation freezes often follow the passage of a cold front, preceding a mass of cool, dry air. There is a stormy period as the cold front moves through, followed by clearing and light winds. During the night, the ground cools by radiation to the sky. The cold ground chills the air close to the ground. This layer of cold air becomes thicker and thicker and a temperature gradient occurs between the cold air close to the ground and warmer air above it. Normally, warmer air is located near the ground and the air temperature falls as you rise upward in the atmosphere. In a radiation freeze, this is reversed and cold air is located close to the ground with a warm layer above it. This is called an inversion. 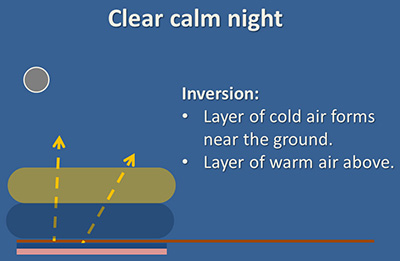 Radiation cooling of the soil during a clear night and formation of a warm air inversion.

Colder air is denser and heavier than warm air so it flows slowly downhill and fills low areas known as frost pockets. Air drainage is the movement of this cold air down slope. The movement of cold air down slope is slow and often a large mass of cold air is necessary to begin the flow. In southwest Michigan, areas that were located higher up on hills with good air drainage can often escape cold that damages lower areas or areas where cold air collects. 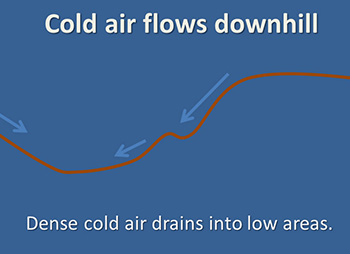 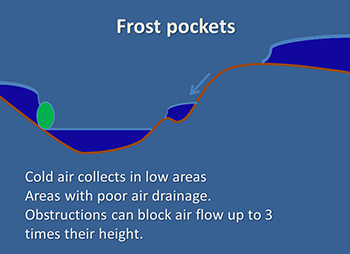 If there is a breeze or clouds, the conditions are not right for a radiation freeze. A wind will mix the colder air close to the ground with warmer air and help warm the ground below. Clouds are even more helpful since they will absorb the heat radiated to the sky and radiate it back down to the ground, warming the ground. 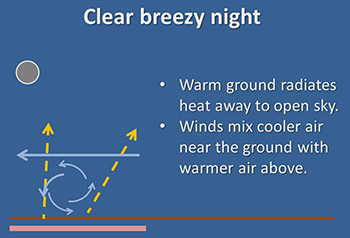 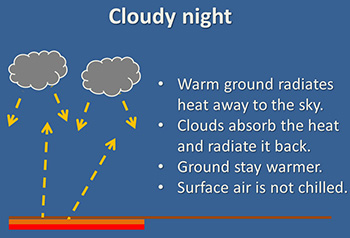 Radiation freezes can be very severe in the winter. When the ground is covered with snow, most of the sun’s heat is reflected immediately back to space and there is very little warming during the day. Cold day polar air can drop to very cold temperatures. Extreme winter cold in 2014 and 2015 with low temperatures down to -20 degrees Fahrenheit were due to radiation freezes during the night in cold dry air.

Michigan State University’s Enviro-weather is a powerful tool provided to growers and other interested in Michigan weather. I use it a lot in the spring and winter to look at frosts and freezing temperatures. By looking at the hours below freezing link on the station page, I can see how low the temperatures have been in southwest Michigan and where the low temperatures are. Often the lowest temperatures occur in the lowest areas in the region where cold air collects during a radiation freeze.

Enviro-weather report for southwest Michigan on April 11, 2012. On this night, most fruit crops had already bloomed and would be damaged by temperatures below 28 F. Note the temperatures at the high elevations of SWMREC, Keeler and Lawton and compare with low points at Grand Junction and Teapot Dome. (Dowagiac station was activated in 2014).